There is general agreement that the Moon is in orbit.
However, there is no clear agreement about which object the Moon orbits.
Perception and prejudice seem to determine which object is preferred. 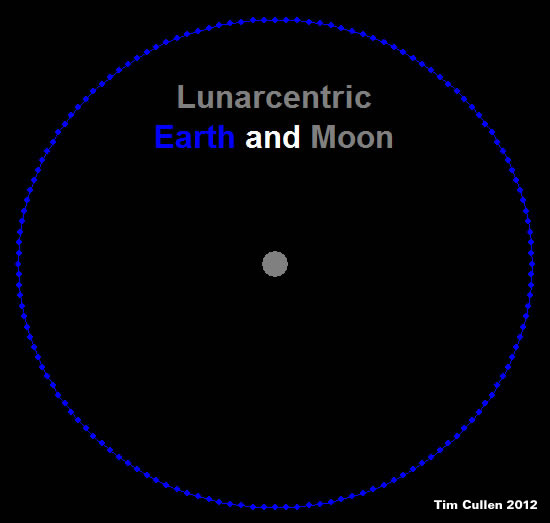 A lunar calendar is a calendar that is based on cycles of the lunar phase.
A common purely lunar calendar is the Islamic calendar or Hijri Qamari calendar. A feature of the Islamic calendar is that a year is always 12 months, so the months are not linked with the seasons and drift each solar year by 11 to 12 days. It comes back to the position it had in relation to the solar year approximately every 33 Islamic years. It is used mainly for religious purposes, and in Saudi Arabia it is the official calendar. Because there are about twelve lunations (synodic months) in a solar year, this period (354.37 days) is sometimes referred to as a lunar year.

The barycentric view is currently presented by Wikipedia as the scientifically correct perception:

The center of mass plays an important role in astronomy and astrophysics, where it is commonly referred to as the barycenter. The barycenter is the point between two objects where they balance each other; it is the center of mass where two or more celestial bodies orbit each other. When a moon orbits a planet, or a planet orbits a star, both bodies are actually orbiting around a point that lies away from the center of the primary (larger) body.

The Moon makes a complete orbit around the Earth with respect to the fixed stars about once every 27.3 days (its sidereal period). However, since the Earth is moving in its orbit about the Sun at the same time, it takes slightly longer for the Moon to show the same phase to Earth, which is about 29.5 days (its synodic period).

Unlike most satellites of other planets, the Moon orbits nearer the ecliptic plane than to the planet’s equatorial plane. The Moon’s orbit is subtly perturbed by the Sun and Earth in many small, complex and interacting ways. For example, the plane of the Moon’s orbital motion gradually rotates, which affects other aspects of lunar motion. These follow-on effects are mathematically described by Cassini’s laws.

The Wikipedia wording is very interesting to say the least:

Therefore, the point [barycentre] is continually moving through all three dimensions and cannot seriously be considered a pivot point about which both the Earth and the Moon orbit.

Curiously, Wikipedia [in an article about Barycentric Coordinates] indicates that the Earth really only “wobbles” [in an unspecified manner] and does not actually orbit the barycentre!

When the barycenter is located within the more massive body, that body will appear to “wobble” rather than following a discernible orbit.

The non-specific Earth “wobble” seems to be the point where Wikipedia becomes evasive. The “wobble” can be interpreted [as in their animation] as the Earth rotating around an internal pivot point [the barycentre]. However, this interpretation seems unrealistic because it would cause a centrifugal tidal bulge on the side of the Earth most distant from the barycentre. I am not aware of any barycentric tidal bulge.

Secondly, the concept of an Earth-Moon barycentre is fundamentally flawed because the underlying barycentre formula derives from the familiar terrestrial machine called a lever which consists of a beam [rigid rod] that pivots around a fixed hinge [fulcrum] that is resting upon firm ground [or a solid surface].

Applying these principles to the Earth and the Moon highlights several problems:
1) There is no rigid bar or beam in space upon which the planets can rest.
2) There is no hinge or fulcrum resting on solid ground.
3) Gravitation between the Earth and Moon is a horizontal vector [not vertical].

Overall, the Earth-Month barycentric orbital concept is fundamentally flawed especially as the Earth does not orbit the barycentre [it just “wobbles” in some way] and the pivot point is not fixed [in wanders about in all three special dimensions].

Technically, the barycentric theory is non-scientific because it does not provide a specific verifiable prediction. The predicted barycentric “wobble” of the Earth can not be separated from other factors that generate “wobble”. For example, an uneven mass distribution would also cause the Earth to “wobble” during its daily axial rotation. Additionally, it is impossible to perform a control experiment [“with the Moon” and “without the Moon”] that demonstrates the barycentric Earth “wobble”.

The heliocentric view is another dissenting perception that simply states that the Earth and the Moon are twin planets that spiral around each other as they orbit the Sun. This view is gaining some traction as people become more aware of manmade satellites, orbiting observatories and space travel.

The Galactic view is another dissenting perception that sees the planets [including the Earth and the Moon] spiralling around the Sun as it travels [at about 370 kilometres per second] toward the constellation of Leo.

I am personally indebted to Nassim Haramein for opening my eyes [via the internet] to this Galactic perspective because it provides a totally new [to me] perspective that confounds much of our established science and provides a pathway to new research, new ideas, new theories, advancement and greater knowledge.

Needless to say:
The Galactic view seems to be the most ignored perspective of them all.
Therefore, I hope this posting is one small step towards balance and enlightenment.

Gallery | This entry was posted in Moon. Bookmark the permalink.