Inventions and Deceptions – Asteroid 2010 SO16

Wikipedia provides an introduction to “Asteroid 2010 SO16” as follows:

2010 SO16 is a near-Earth asteroid discovered by the Wide-field Infrared Survey Explorer space telescope. The orbit was described by Christou Apostolos and David Asher at the Armagh Observatory in Northern Ireland. The object has a magnitude of 20.7 and is several hundred meters in diameter.

2010 SO16 has a “horseshoe orbit” that allows it to stably share Earth’s orbital neighborhood without colliding with it. It is one of a handful of known asteroids with such an orbit, a group that includes 3753 Cruithne. It is, however, neither an Aten asteroid nor an Apollo asteroid because the semi-major axis of its orbit is neither less than nor greater than 1 AU, but oscillates between approximately 0.996 and 1.004 AU, with a period of about 350 yr. In its ~350 yr horseshoe cycle, it never approaches the Earth more closely than about 0.15 AU, alternately trailing and leading.
http://en.wikipedia.org/wiki/2010_SO16

Wikipedia also provides an explanation of the “horseshoe orbital” cycle:

The following explanation relates to an asteroid which is in such an orbit around the Sun, and is also affected by the Earth.
The asteroid is in almost the same solar orbit as Earth.
Both take approximately one year to orbit the Sun.

It is also necessary to grasp two rules of orbit dynamics:
1) A body closer to the Sun completes an orbit more quickly than a body further away.
2) If a body accelerates along its orbit, its orbit moves outwards from the Sun. If it decelerates, the orbital radius decreases.

The horseshoe orbit arises because the gravitational attraction of the Earth changes the shape of the elliptical orbit of the asteroid. The shape changes are very small but result in significant changes relative to the Earth.

Starting out at point A on the inner ring between L5 and Earth, the satellite is orbiting faster than the Earth. It’s on its way toward passing between the Earth and the Sun. But Earth’s gravity exerts an outward accelerating force, pulling the satellite into a higher orbit which (per Kepler’s third law) decreases its angular speed.

When the satellite gets to point B, it is traveling at the same speed as Earth. Earth’s gravity is still accelerating the satellite along the orbital path, and continues to pull the satellite into a higher orbit. Eventually, at C, the satellite reaches a high enough, slow enough orbit and starts to lag behind Earth. It then spends the next century or more appearing to drift ‘backwards’ around the orbit when viewed relative to the Earth. Its orbit around the Sun still takes only slightly more than one Earth year.

Eventually the satellite comes around to point D. Earth’s gravity is now reducing the satellite’s orbital velocity, causing it to fall into a lower orbit, which actually increases the angular speed of the satellite. This continues until the satellite’s orbit is lower and faster than Earth’s orbit. It begins moving out ahead of the earth. Over the next few centuries it completes its journey back to point A.

Unfortunately, using standard gravitational theory, the “horseshoe” [or “C”] orbit is “impossible” according to Miles Mathis:

Asteroid 2010 SO16, discovered in September of 2010 by Apostolos Christou and David Asher at the Armagh Observatory in Northern Ireland, follows the C-orbit above, drawn in blue-green. Of course, by the gravity-only theory, this is impossible.

To divert you from this rather obvious and glaring conclusion, the mathematicians at NASA and worldwide shunt you off into Lagrange point math. That is what the green L numbers are. They are trying to convince you that the gravity field can create these field potentials (white lines), so that this orbit looks plausible.

…all we have to do is look at the asteroid as it approaches the Earth, from either direction (point A or D). The distance between asteroid and Earth is diminishing with time, so the gravitational force between them must be increasing rapidly. The distance between Sun and asteroid is not yet changing at these points (it changes soon afterwards), so the force between Sun and asteroid is not changing. Therefore, we may ask what would make the asteroid make a 90o turn at this point in its motion.

The Earth’s “straight line” gravitational attraction starts at point A [according to the illustration]. Therefore, the simple mechanics of the “standard model” dictates that the circular orbit of the asteroid will be perturbed as the asteroid starts to accelerate towards Earth.

Furthermore, the trajectory of the perturbed orbit must pass somewhere between point L1 [on the usual circular orbit path] and the centre of the Earth. Given the low approach speed of the asteroid Miles Mathis concludes that “by all the laws of gravity, the asteroid should crash into the Earth.” 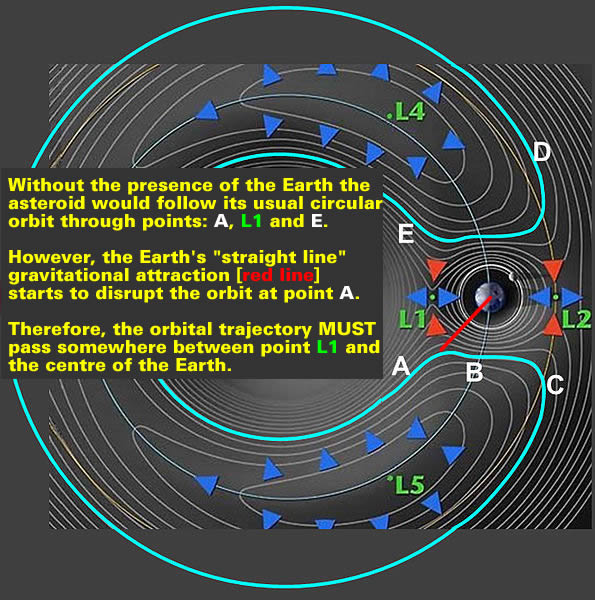 However, the asteroids trajectory is totally compatible with the [predominately circular at this distance] “gravitational” force exerted by a Geocentric Rankine Vortex.

The transitions from both the inner (faster) and outer (slower) orbital paths [around the Sun] always follow the path of the [predominately circular at this distance] “gravitational” force of Earth. 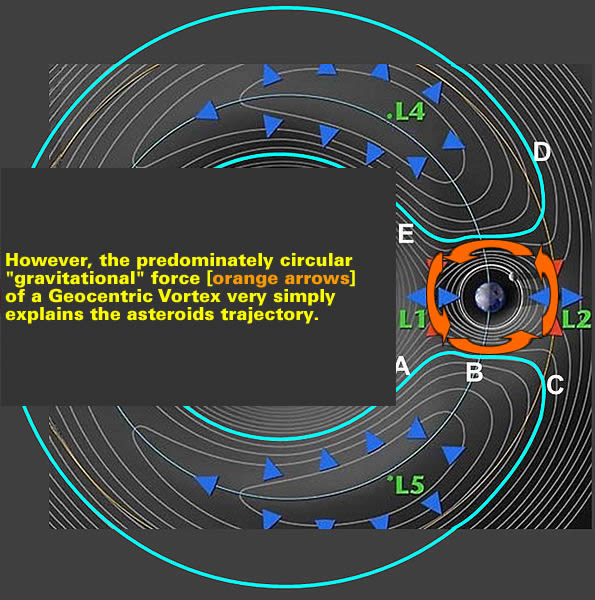 17 Responses to Inventions and Deceptions – Asteroid 2010 SO16