The luminescence that dare not speak its name

When it comes to Titan’s fluorescing hydrogen exosphere the mainstream has deployed a range of techniques to deflect, misdirect and omit. Titan has been [as we shall see] a Herculean task of obscuration that the mainstream has sustained for many years.

This natural color composite was taken during the Cassini spacecraft’s April 16, 2005, flyby of Titan. It is a combination of images taken through three filters that are sensitive to red, green and violet light. It shows approximately what Titan would look like to the human eye: a hazy orange globe surrounded by a tenuous, bluish haze.

The “short-wavelength” magic bouncing blue photons that scatter in all directions appears plausible provided we forget about “shorter-wavelength” indigo light and “even shorter-wavelength” violet light [and to help us forget they seem keen to remove indigo from the modern spectral lexicon].

Unfortunately, the mainstream is using this trick when trying to explain away the Earth’s blue sky. Below they show the magic blue photon being scattered by the atmosphere in all directions when the light is not directly travelling from the Sun to the observer.

However, the blue light travelling directly from the Sun to the observer is suddenly NOT magic for some inexplicable reason. This sleight of hand is required to prevent the reader from remembering that blue light is not diminished [in the resultant spectrum] when direct sunlight is split by a prism. This slight of hand is also required to prevent the more astute astronomers from wondering how they observer blue planets [through their telescopes] if the blue light is simply being scattered in all directions by the atmosphere.

The sunlit sky is blue because air scatters short-wavelength light more than longer wavelengths. Since blue light is at the short wavelength end of the visible spectrum, it is more strongly scattered in the atmosphere than long wavelength red light.

But “no explanation” is nothing new.

Don’t mention the blue
The following illustration [from 2008] talks about “atmospheric haze” but provides no explanation although it does provide diverting information about how “methane raises the temperature at the surface”. This is evidently a rather relative claim as the surface temperature of Titan is quoted to be a distinctly chilly -179 Centigrade [93.7 K or -290 F] complicated by the fact that Titan’s surface atmosphere only contains 1.4% methane [which freezes below -182 C, 90.7 K, -296°F].

The glow of Titan’s extensive atmosphere shines in false colors in this view of Saturn’s gas-enshrouded moon acquired by the Cassini spacecraft visual and infrared mapping spectrometer during the July 2, 2004, flyby.

The use of “false colors” is a helpful technique [to visualise the invisible] but it can also be abused.

In this example the “false color” technique is used because the underlying “glowing” images are in the infrared spectrum and aren’t actually “glowing” because infrared is invisible to the naked eye.

The leftmost “blue image” is strangely mislabelled [“Sunlit Surface + Atmosphere”].
The explanatory text [below] clearly states that the “blue image” shows “only the surface”

The blue image shows the sunlit crescent as observed at a wavelength that pierces through the thick atmosphere to show only the surface. This image is much smaller than the other three images to the right, because it does not show any atmospheric affects.

The text carefully avoids specifying the wavelength used to capture the “blue image” and tries to imply this image was captured in the visible spectrum by describing the surface as “Sunlit”.

The use of the phrase “Sunlit Surface” is seriously creative because Titan [according to Wikipedia] “receives just about 1 % of the amount of sunlight Earth gets” whilst Titan’s thick opaque haze layers “block most visible light from the Sun” which “renders Titan’s surface features obscure”.

Next up we have the “green image” labelled “Methane Fluorescence”.

This is a major step forward in that it acknowledges atmospheric fluorescence.

In contrast, the green image shows the immense size of Titan’s atmosphere. This is revealed by the fluorescent glow of methane gas, which extends over 700 kilometers (435 miles) above the surface, showing that the atmosphere nearly doubles the size of Titan. This glow is at a wavelength of 3.3 microns, five times the wavelength visible to the human eye.

However, attributing this level of photon emissions to methane molecules appears imaginative because Titan’s very cold [-179 C, 93.7 K, -290 F] lower atmosphere contains only 1.4% methane and its presence was discovered by Gerard Kuiper [in 1944] when he identified the absorption bands of methane in Titan’s spectrum.

Absorption due to methane is the dominant feature of the near-IR spectrum, giving rise to a series of deep absorption features separated by “windows” where methane is relatively transparent and the surface can be seen.

Annotated spectrum of Titan (from Karkoschka, 1995) showing the reddish
colour and the methane absorption bands (after Lorenz and Mitton, 2002)

Next up is the “red image” labelled “Sunlit Surface + Stratospheric Emissions”.

The label attempts to reinforce the misdirection by repeating the “Sunlit Surface” sobriquet whilst the “Stratospheric Emissions” are attributed to carbon monoxide which is only a “trace gas” in the lower atmosphere of Titan.

The textual description implies that the infrared “glowing” [of this trace gas] in the stratosphere manages to [magically] penetrate the blanketing thick opaque haze layers above the stratosphere.

Needless to say, this “glowing” is [again] in the [invisible to the naked eye] infrared spectrum.

The red image shows that Titan also glows at night, which initially surprised scientists. The moon glows out to more than 200 kilometers (124 miles) in altitude, indicating carbon-monoxide emission at the 4.7 micron wavelength produced in Titan’s relatively warm stratosphere.

The final “composite” is generated by overlaying the three [previous] “false color” images.

Unfortunately, the concluding text does not explain how [and this is the main magic trick] overlaying three “false color” infrared images [which would otherwise be invisible to the naked eye] can reproduce Titan’s exospheric glow which is observed in the visible spectrum.

The multicolor image on the far right combines the three previous images into one composite. Here it is seen that the carbon monoxide glow extends over the dayside as well, producing the yellow layer observed on the left. This is because the two glows, one from methane (green) and carbon monoxide (red) mix together to form yellow in this multi-color composite. Titan’s surface is indicated by the circle. Titan’s surface appears purple due to the mixing of the blue and red surface images.

Here the misdirection moves to a higher, more sophisticated level [for more inquiring minds]. In these images of Titan the visible blue exosphere is visually emulated [explained away] by using blue as a “false colour” to render an infrared atmospheric emission.
Very ingenious!

Views of Titan, obtained on six nights in February 2004.
At the right, the image from the first night (Feburary 1-2, 2004) has been enlarged for clarity and the coordinate grid on Titan is indicated.
The images are false-colour renderings with the three SDI wavebands as red (1.575 μm; surface), green (1.600 μm; surface) and blue (1.625 μm; atmosphere), respectively.

However, this level of convoluted graphical charade has been difficult to sustain.

Ignore the problem
Therefore, the new approach is to simply ignore the problem and hope nobody notices the omission. The following graphic from NASA simply does not label Titan’s glowing hydrogen exosphere. Problem solved! 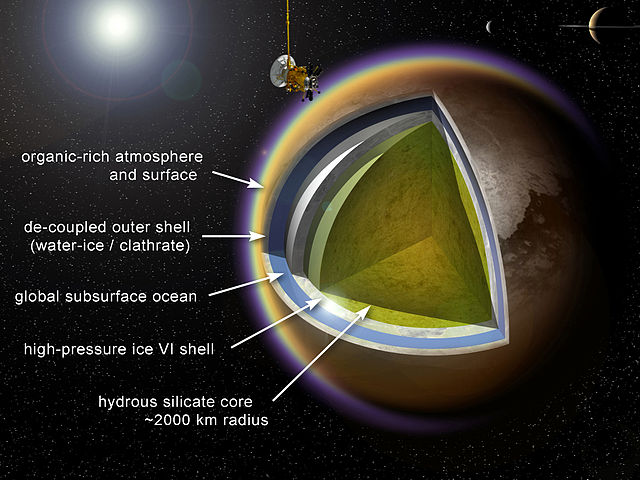