The posting will start to piece together a holistic view of history and begin to unravel some of the mysteries that the mainstream is avoiding.

The first cornerstone of this analysis is based upon the mainstream observation that “the human population was reduced to a small number of breeding pairs” [in Africa] about 100,000 years ago.

The variation in human DNA is minute compared to that of other species, possibly suggesting a population bottleneck during the Late Pleistocene (ca. 100,000 years ago), in which the human population was reduced to a small number of breeding pairs.

The second cornerstone of this analysis is based upon the mainstream observation that the last glacial period was “approximately 110,000 to 10,000 years ago”.

Given the vagaries and inherent inaccuracies of the mainstream timeline is would be very surprising if these two cornerstone were unconnected.

Unfortunately, the mainstream prefers to avoid making the connection between the onset of the last glacial period and the reduction of the human race “to a small number of breeding pairs”.

The mainstream reluctance to “join up the historic dots” is because they [predominately] wish to avoid discrediting uniformitarianism [another belief system of settled science – see below] upon which “virtually all fields of science” are based.

Uniformitarianism is the assumption that the same natural laws and processes that operate in the universe now have always operated in the universe in the past and apply everywhere in the universe. It has included the gradualistic concept that “the present is the key to the past” and is functioning at the same rates.
Uniformitarianism has been a key principle of geology and virtually all fields of science, but naturalism’s modern geologists, while accepting that geology has occurred across deep time, no longer hold to a strict gradualism.

A wonderful example of mainstream gradualism is the Wikipedia human migration map which gives the first hint that “all is not right” by using a very strange map projection which include dotted migration paths which [presumably] indicate a lack of supporting evidence [or wishful thinking].

The second hint is the mainstream timeline starting [in Africa] between 130,000 and 170,000 years ago whilst it is [contrarily] stated that a “population bottleneck” occurred about 100,000 years ago and “the human population was reduced to a small number of breeding pairs”.

The third hint [as discussed in the previous posting] is the mainstream claim that humans migrated to Western Europe [in the middle of the last ice age] between 40,000 and 50,000 years ago and [only then] “began to exhibit full behavioral modernity” whilst large areas of Western Europe were covered in ice which was surrounded by polar desert, tundra and steppe climatic zones. 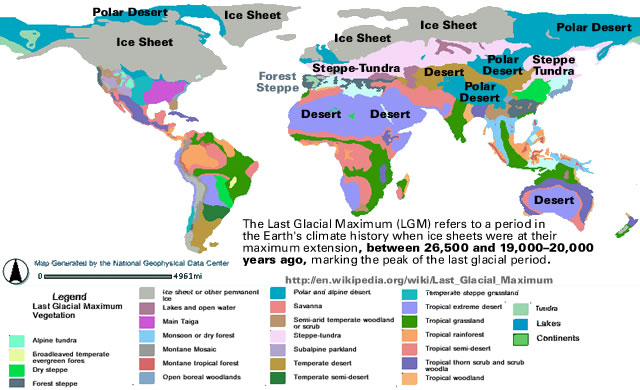 The fourth hint embedded in the skin colour map [that there are real problems with the mainstream mythology] is the three identical skin colour scales [that are conveniently said to have evolved independently in Africa, India and the Far East] which are inconsistent across insolation levels.

Contradictorily, only the [identical] lighter scale of skin colours have evolved [under the same range of insolation] in the Americas.

Untangling this messy mainstream migration mythology is simply done by applying the same reconstruction technique employed to piece together the fossil record of Pangea.

Applying the same reconstruction technique to the map of human skin colour provides a new insight into history because the continents migrated – not the people.

2) Australia finally broke away and became genetically isolated 40-50,000 years ago.

3) North America broke away and became genetically isolated [from Africa] 25-35,000 years ago, thus the pyramid cultures in Africa and America were physically connected in the past.

Note:
Dating based upon the estimates for mtDNA mutations are subject to [undoubtedly significant] downward review because most skin colour adaptations occurred before the continents migrated.