The “science” of Geology has been accumulating observations for about 2,300 years.

Geology is the science comprising the study of solid Earth, the rocks of which it is composed, and the processes by which they change.
…
The study of the physical material of the Earth dates back at least to ancient Greece when Theophrastus (372-287 BCE) wrote the work Peri Lithon (On Stones)

William Smith (1769–1839) drew some of the first geological maps and began the process of ordering rock strata (layers) by examining the fossils contained in them.

The first geological map of Britain, published by William Smith in 1815
http://en.wikipedia.org/wiki/William_Smith_%28geologist%29

Stratigraphy of the Grand Canyon
http://en.wikipedia.org/wiki/Grand_canyon

Unsurprisingly, Geology has amassed a huge and disparate archive of stratigraphy from all over the world. This archive is collated and co-ordinated by the International Commission on Stratigraphy.

Its primary objective is to precisely define global units (systems, series, and stages) of the International Chronostratigraphic Chart that, in turn, are the basis for the units (periods, epochs, and age) of the International Geologic Time Scale; thus setting global standards for the fundamental scale for expressing the history of the Earth.

The International Chronostratigraphic Chart [above] structures 4,600 million years of Stratigraphy into a consensus “hymn sheet” for mainstream geologists.

Unfortunately, chronology is not a precise science [to put it nicely] and inevitably different Geologists will assign different chronologies to a particular stratigraphy.

Therefore, to preserve the integrity of the mainstream “hymn sheet” mainstream Geology uses all of the “dark arts” that have been pioneered by post-normal science:

The Vostok Research Station is at an altitude of 3,488 meters above sea level and the Vostok ice cores, to a depth of 3,623 metres, have a chronology dating back 420,000 years.

In the 1970s the Soviet Union drilled a set of cores 500–952 m deep.
These have been used to study the oxygen isotope composition of the ice, which showed that ice of the last glacial period was present below about 400 m depth.

Then three more holes were drilled:

In 1996 it was stopped at depth 3623 m, by the request of the Scientific Committee on Antarctic Research that expressed worries about possible contamination of Lake Vostok. 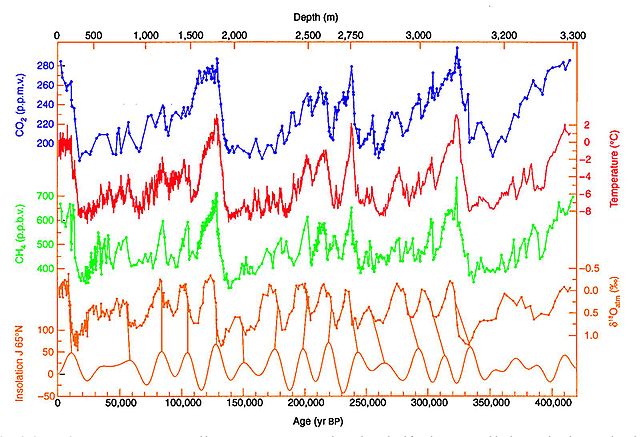 This site (75°06′S 123°21′E, 3233 m above sea level, 560 km from Vostok Station) was chosen to obtain the longest undisturbed chronicle of environmental change, in order to characterise climate variability over several glacial cycles, and to study potential climate forcings and their relationship to events in other regions. The core goes back 740,000 years and reveals 8 previous glacial cycles. Drilling was completed at this site in December 2004, reaching a drilling depth of 3270.2 m, 5 m above bedrock.

Studying the Vostok and EPICA Dome C ice cores makes it impossible to understand how the shorter [by 353 metres] EPICA Dome C core can have a longer [by 381,712 years] chronology than the Vostok ice core especially as the core sequence patterns can be so easily reconciled [see below].

The preposterous EPICA Dome C chronology is breathtaking in its audacity because it manages to magic into existence 381,712 years [and their associated glacial cycles] from the final 483 metres of the EPICA Dome C ice core [averaging 1.42 millimetres per year].

Then something miraculous occurs in the chronology.

Beyond “20,000 years ago” [at a depth of about 500 metres] the precipitous decline in “millimetres per year” suddenly halts when 88% of the original “annual ice layer” has been laterally displaced.

For the next “110,000 years” the ice core mysteriously stops dissipating [disappearing].

Thereafter, the ice core “hockey stick” chronology conforms to the established consensus of gradualism with the occasional “glacial cycle” thrown in for good measure.

Eventually, the final years of the chronology are associated with only 0.51 millimetres of ice core.

The miraculous nature of the EPICA Dome C chronology becomes even more incredible when compared to the Greenland ice cores.

The site was chosen for a flat basal topography to avoid the flow distortions that render the bottom of the GRIP and GISP cores unreliable.

Apparently, southern ice sheets manage to squeeze in 540 percent more years into a metre of ice!

The mainstream prefers to present a simple view of ice core dating based upon “counting individual layers” [just like counting “tree rings”].

Shallow cores, or the upper parts of cores in high-accumulation areas, can be dated exactly by counting individual layers, each representing a year. These layers may be visible, related to the nature of the ice; or they may be chemical, related to differential transport in different seasons; or they may be isotopic, reflecting the annual temperature signal (for example, snow from colder periods has less of the heavier isotopes of H and O).

Deeper into the core the layers thin out due to ice flow and high pressure and eventually individual years cannot be distinguished.

It may be possible to identify events such as nuclear bomb atmospheric testing’s radioisotope layers in the upper levels, and ash layers corresponding to known volcanic eruptions. Volcanic eruptions may be detected by visible ash layers, acidic chemistry, or electrical resistance change. Some composition changes are detected by high-resolution scans of electrical resistance.

Eventually, at an unspecified depth, the “individual years cannot be distinguished” in the ice core.

Wikipedia then helpfully suggests that volcanic “ash layers” and nuclear bomb “radioisotope layers” can be used to accurately date the ice core.

Unfortunately, the nuclear bomb “radioisotope layers” can only be used to date ice core layers deposited in the 20th century and the volcanic “ash layers” are of very limited use because the chronology of volcanic eruptions is very “sketchy” before 1600.

The sad truth is that much of the ice core chronology is based upon [bogus] computer modelling.

This is obviously a research bonanza for the mainstream because “ice accumulation” models require “ice sheet flow” models and “climate” models that can hindcast temperatures and all forms of precipitation for 800,000 years [in the case of the Antarctic EPICA Dome C core].

Lower down the ages are reconstructed by modeling accumulation rate variations and ice flow.
http://en.wikipedia.org/wiki/Ice_core

Dating is a difficult task.

Matching peaks by visual examination of Moulton and Vostok ice cores suggests a time difference of about 10,000 years but proper interpretation requires knowing the reasons for the differences.

Given, the wider context of “natural climate variability” and mainstream Plate Tectonics [or the alternate Expanding Earth theories] it is impossible to know the precise geographic location [and precise climate regime] of Antarctica and Greenland 800,000 years ago.

Underlying all of these ice core chronologies is the simple [yet totally unsupported] assumption that the ice sheets have been continuously accumulating ice throughout their chronologies and that there have been no sustained melting events.

The likelihood of this is extremely small for Antarctica [simply based upon the mainstream Greenland chronology] because Greenland was “officially” ice free 140,000 years ago [and the world was, presumably, a much warmer place].

Beyond these obvious inconsistencies there is a simple fact regarding ice sheets that the mainstream would prefer everyone to ignore.

Simply put: every ice sheet is melting from the bottom up.

Unusually, there is melting at the bottom of the NGRIP core – believed to be due to a high geothermal heat flux locally.

Wikipedia is being less that honest when it remarks “Unusually, there is melting at the bottom” of the Greenland NGRIP ice core because Antarctica has “almost 400 known subglacial lakes”.

At this stage it’s appropriate the take another look at Greenland’s “brown sludge” layers found in the ice core below 3,050 metres.

The only obvious clues [given by the mainstream] regarding these “brown sludge” layers is their remarkable thickness [11 millimetres] and lack of compression.

This has the advantage that the bottom layers are less compressed by thinning than they would otherwise be: NGRIP annual layers at 105 kyr age are 1.1 cm thick, twice the GRIP thicknesses at equal age.

These remarkable observations inevitably lead to the conclusion that the bottom “brown sludge” layers are layers of frozen melt water because once an original ice layer has been compressed [and the bulk of the ice layer has been laterally displaced – or squeezed out – in the main body of the ice core] then it is impossible for the layer to subsequently expanded to a thickness of 11 millimetres.

Overall, the mainstream “science” of ice cores and their chronologies is just hopelessly flawed and compromised “junk science”.

This sad state of affairs has been extensively documented by the late Zbigniew Jaworowski who noted [amongst other things] the way the mainstream manipulated ice core data to fit their theories.