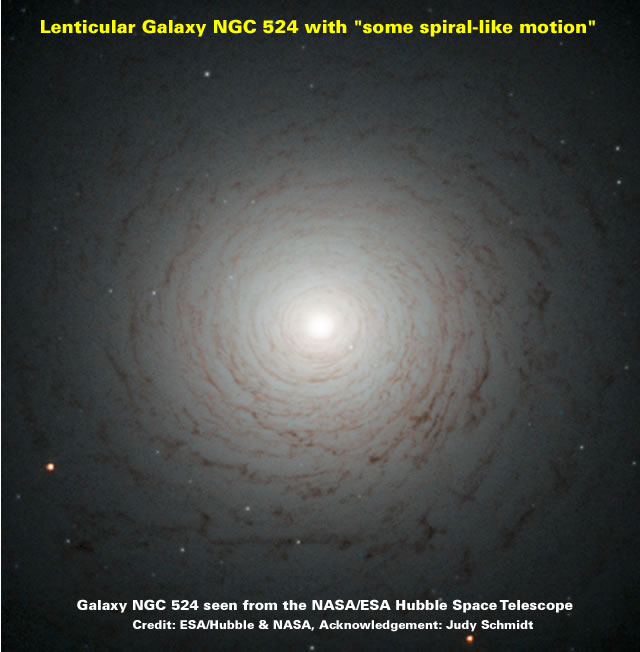 The mainstream has a phobia regarding the word “vortex”.

However, the word “spiral” seems to be acceptable to the mainstream provided it is prefixed by the word “old” or “some”.

Hubble eyes a mysterious old spiral
This striking cosmic whirl is the center of galaxy NGC 524, as seen with the NASA/ESA Hubble Space Telescope.

This galaxy is located in the constellation of Pisces, some 90 million light-years from Earth. NGC 524 is a lenticular galaxy.

Lenticular galaxies are believed to be an intermediate state in galactic evolution—they are neither elliptical nor spiral. Spirals are middle-aged galaxies with vast, pin wheeling arms that contain millions of stars.

Along with these stars are large clouds of gas and dust that, when dense enough, are the nurseries where new stars are born.

When all the gas is either depleted or lost into space, the arms gradually fade away and the spiral shape begins to weaken.

At the end of this process, what remains is a lenticular galaxy—a bright disc full of old, red stars surrounded by what little gas and dust the galaxy has managed to cling on to.

This image shows the shape of NGC 524 in detail, formed by the remaining gas surrounding the galaxy’s central bulge. Observations of this galaxy have revealed that it maintains some spiral-like motion, explaining its intricate structure.

The [above] Hubble image of the lenticular galaxy NGC 524 is truly remarkable.

However, what is even more remarkable is that NGC 524 demonstrates “some spiral-like motion” because this observation falsifies the mainstream notion that lenticular galaxies “are neither elliptical nor spiral”.

The mainstream phobia regarding the word “vortex” is simply cognitive dissonance caused by observations that don’t fit with what they know.

The theory of cognitive dissonance in social psychology proposes that people have a motivational drive to reduce dissonance by altering existing cognitions, adding new ones to create a consistent belief system, or alternatively by reducing the importance of any one of the dissonant elements.

Cognitive dissonance is the distressing mental state that people feel when they “find themselves doing things that don’t fit with what they know, or having opinions that do not fit with other opinions they hold.”

A key assumption is that people want their expectations to meet reality, creating a sense of equilibrium.

Likewise, another assumption is that a person will avoid situations or information sources that give rise to feelings of uneasiness, or dissonance.