The previous posting began an exploration of the Star Evolution narrative devised by the mainstream Philosophical Astrologers which revealed that [from a distance] the Earth and Moon could be easily mistaken for white dwarfs.

The cameras on NASA’s Cassini spacecraft captured this rare look at Earth and its moon from Saturn orbit on July 19, 2013. The image has been magnified five times. Taken while performing a large wide-angle mosaic of the entire Saturn ring system, narrow-angle camera images were deliberately inserted into the sequence in order to image Earth and its moon.
…
Images taken using red, green and blue spectral filters were combined to create this natural color view. The images were obtained by the Cassini spacecraft cameras on July 19, 2013 at a distance of approximately 898.414 million miles (1.445858 billion kilometers) from Earth.

Continuing the exploration of this Tolkienesque universe reveals there are red dwarf stars.

A red dwarf is a small and relatively cool star on the main sequence, either late K or M spectral type.

Red dwarfs range in mass from a low of 0.075 solar masses (the upper limit for a brown dwarf) to about 50% of the Sun and have a surface temperature of less than 4,000 K.

Red dwarfs are very curious stars because their “low luminosity” ensures they cannot be seen with the naked eye.

Red dwarfs are by far the most common type of star in the Milky Way galaxy, at least in the neighborhood of the Sun, but due to their low luminosity, individual red dwarfs cannot easily be observed.

From Earth, not one is visible to the naked eye.

On November 4, 2013, astronomers reported, based on Kepler space mission data, that there could be as many as 40 billion Earth-sized planets orbiting in the habitable zones of sun-like stars and red dwarf stars within the Milky Way Galaxy.

The camera shy red dwarf star SO25300.5+165258, for example, is more than usually curious because it may be orange or it may actually be red.

Even if there is some confusion regarding the actual colour of this particular red dwarf we can be assured that it, like all red dwarfs, will have “a constant luminosity and spectral type for, in theory, some trillions of years”

Red dwarfs therefore develop very slowly, having a constant luminosity and spectral type for, in theory, some trillions of years, until their fuel is depleted.

Because of the comparatively short age of the universe, no red dwarfs of advanced evolutionary stages exist.

A flare star is a variable star that can undergo unpredictable dramatic increases in brightness for a few minutes.

It is believed that the flares on flare stars are analogous to solar flares in that they are due to magnetic reconnection in the atmospheres of the stars.

The brightness increase is across the spectrum, from X rays to radio waves.
…
Most flare stars are dim red dwarfs, although recent research indicates that less massive brown dwarfs might also be capable of flaring.
…
The Sun’s nearest stellar neighbor Proxima Centauri is a flare star that undergoes random increases in brightness because of magnetic activity.

Proxima Centauri is a red dwarf about 4.24 light-years from the Sun, inside the G-cloud, in the constellation of Centaurus.

It was discovered in 1915 by Scottish astronomer Robert Innes, the Director of the Union Observatory in South Africa, and is the nearest known star to the Sun, although it is too faint to be seen with the naked eye (apparent magnitude 11.05).

Luckily, being only 4.24 light years away, the Philosophical Astrologers have closely studied Proxima Centauri so they could precisely identify the colour of this dim and flaring red dwarf star.

Unsurprisingly, Proxima Centauri is red because it’s a red dwarf. 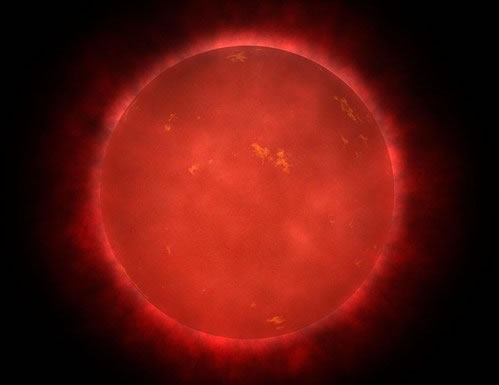 The nearest star to our Sun is Proxima Centauri. This star is four light years away – about 24 trillion miles.

Except, of course, when Proxima Centauri is pink. 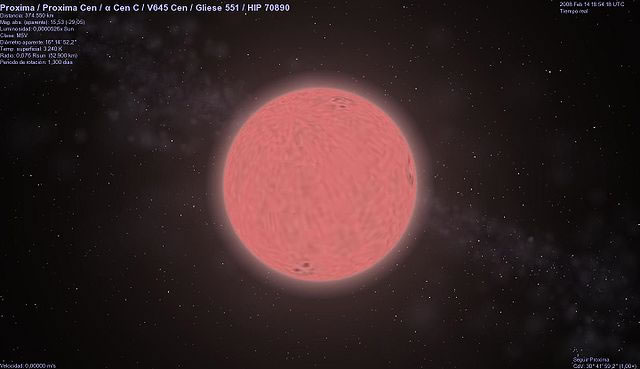 The faint red star in the center of the red circle is Proxima Centauri.

This diagram illustrates, from left to right, the relative size of the Sun, α Centauri A, α Centauri B and Proxima Centauri.

Proxima Centauri, the closest star to Earth other than the Sun, as seen by 2MASS.

Shining brightly in this Hubble image is our closest stellar neighbour: Proxima Centauri. 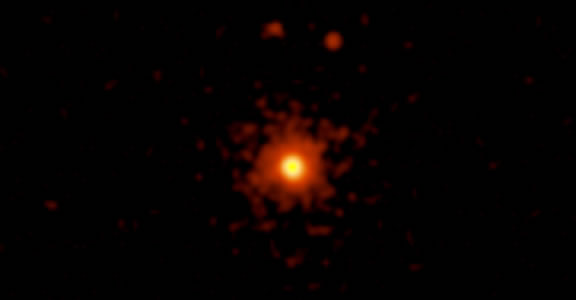 Chandra and XMM-Newton observations of the red dwarf star Proxima Centauri have shown that its surface is in a state of turmoil. Flares, or explosive outbursts, occur almost continually.

Or cool, red and “brighter on the near-infrared”.

A small sky field with the nearest known star, Proxima Centauri, close to the centre.

Clearly, there is some confusion regarding our nearest dim red dwarf neighbour.

Unfortunately, it doesn’t get any better looking at the next couple of closest stars.

Barnard’s Star is the next star and is a red dwarf that is about 5.963 light years distant.

Barnard’s Star is a red dwarf of the dim spectral type M4, and it is too faint to see without a telescope. Its apparent magnitude is 9.54.

WISE 1049-5319… is a binary brown dwarf located in the southern constellation Vela at 6.6 light-years from the Sun, making these the nearest known brown dwarfs to the Solar System, and the closest system discovered since Barnard’s Star in 1916.

Perhaps the most fascinating aspect of this visual review of red dwarfs is the recent mainstream preference to misrepresent these dim stars as blazing stars.

The Hubble image of Proxima Centauri released in October 2013 is probably the best example of this visual exaggeration.

Presumably, this misdirection aims to visually break the connection between stars and the Gas Giants in the Solar System.

Tracing the Philosophical Astrologers Main Sequence of Star Evolution back to its roots starts with the dim red dwarfs.

A red dwarf is a small and relatively cool star on the main sequence, either late K or M spectral type.

Red dwarfs range in mass from a low of 0.075 solar masses (the upper limit for a brown dwarf) to about 50% of the Sun and have a surface temperature of less than 4,000 K.
…
Red dwarfs are very-low-mass stars.

Consequently they have relatively low temperatures in their cores and energy is generated at a slow rate through nuclear fusion of hydrogen into helium by the proton–proton (PP) chain mechanism. Hence these stars emit little light, sometimes as little as 1⁄10,000 that of the Sun

The red dwarfs track back to the brown dwarfs.

Brown dwarfs are substellar objects too low in mass to sustain hydrogen-1 fusion reactions in their cores, unlike main-sequence stars, which can.

They occupy the mass range between the heaviest gas giants and the lightest stars, with an upper limit around 75 to 80 Jupiter masses (MJ).

Brown dwarfs heavier than about 13 MJ are thought to fuse deuterium and those above ~65 MJ, fuse lithium as well.

The brown dwarfs track back to the Gas Giants.

Gas giants have some of the characteristics of brown dwarfs.

For example, Jupiter and Saturn are both made primarily of hydrogen and helium, like the Sun.

Saturn is nearly as large as Jupiter, despite having only 30% the mass.

Three of the giants in the Solar System (Jupiter, Saturn, and Neptune) emit more heat than they receive from the Sun.

And all four giant planets have their own “planetary systems”—their moons.

Brown dwarfs form independently, like stars, but lack sufficient mass to “ignite” as stars do.

Like all stars, they can occur singly or in close proximity to other stars.

Some orbit stars and can, like planets, have eccentric orbits.

The Gas Giants track back to the terrestrial planets because they all have dense cores.

In planetary science, planetary differentiation is the process of separating out different constituents of a planetary body as a consequence of their physical or chemical behaviour, where the body develops into compositionally distinct layers; the denser materials of a planet sink to the center, while less dense materials rise to the surface.

Such a process tends to create a core and mantle.

The key point being that the densest elements [such as radioactive uranium] form part of the planetary inner core.

The inner core of the Earth, its innermost part, is a primarily solid ball with a radius of about 1,220 km (760 mi), according to seismological studies. (This is about 70% of the Moon’s radius.)

It is believed to consist primarily of an iron–nickel alloy, and to be about the same temperature as the surface of the Sun: approximately 5700 K (5430 °C).

While the outer core is formed of less dense elements such as iron and nickel.

The outer core of the Earth is a liquid layer about 2,266 km (1,408 mi) thick composed of iron and nickel which lies above the Earth’s solid inner core and below its mantle.

The transition between the inner core and outer core is located approximately 5,150 km (3,200 mi) beneath the Earth’s surface.

This natural structure is emulated in nuclear fission bombs.

In fission weapons, a mass of fissile material (enriched uranium or plutonium) is assembled into a supercritical mass—the amount of material needed to start an exponentially growing nuclear chain reaction—either by shooting one piece of sub-critical material into another (the “gun” method) or by compressing a sub-critical sphere of material using chemical explosives to many times its original density (the “implosion” method).

Therefore, a planetary inner-core that contains a critical mass of radioactive elements will initiate a fission chain reaction if sufficient pressure is contained within the enveloping iron outer core.

The excess heat and pressure generated by the nuclear reaction in the inner-core may cause the outer core to fracture and release energy that will drive volcanism in the planet. The release of pressure from the inner core will also tend to moderate the reaction or cause intermittent periods of quiescence that may finally terminate the reaction.

However, the natural pressurised design of the planetary core also enables a nuclear fission reaction to trigger a nuclear fusion reaction if sufficient pressure is contained within the enveloping iron outer core.

The other basic type of nuclear weapon produces a large proportion of its energy in nuclear fusion reactions.

Such fusion weapons are generally referred to as thermonuclear weapons or more colloquially as hydrogen bombs (abbreviated as H-bombs), as they rely on fusion reactions between isotopes of hydrogen (deuterium and tritium).

All such weapons derive a significant portion, and sometimes a majority, of their energy from fission.

The basics of the Teller–Ulam design for a hydrogen bomb: a fission bomb uses radiation to compress and heat a separate section of fusion fuel.

The more powerful nuclear fusion reactions can lead to catastrophic explosions if the planetary outer core contains [and sustains] the fusion reaction for too long.

Alternatively, the fusion reaction will fracture and melt the outer core. The resultant release of energy and lighter elements will drive planetary outgassing and the rapid physical expansion of the planet.

The release of pressure from the inner core will also tend to moderate the fusion reaction or cause intermittent periods of quiescence that may finally terminate the reaction.

The crust, oceans and atmosphere of the Inflated Earth all indicate that the planet has experienced rapid expansion and outgassing of lighter elements driven by a fusion reaction in the inner core.