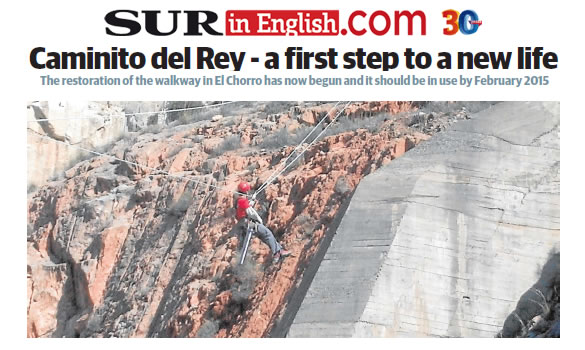 Sur in English reports that work has begun to restore the Caminito del Rey walkway.

The Caminito del Rey runs at a height of 100 metres over the Guadalhorce river.
…
A team of highly specialised workers will have to be used, hanging from the rock to put the wood into place along the four kilometres of rock face, as well as the metal of the bridge.

Along some stretches, the floor will be made of glass panels to give a view of the gorge below.

The materials will be transported to the climbers by helicopter.

This is an unusual method of working, but the Caminito del Rey is a very unusual walkway.
…
“Today we are taking a definitive step towards the Caminito de Rey being used again,” said Elías Bendodo. “It will no longer be something which is prohibited and dangerous, and will become something that people can enjoy.”

In early 2015 people will once again be able to walk the ‘King’s Path’.

For anyone who is unfamiliar with the Caminito del Rey:

El Chorro (“The Spurt”) is a small village located in Málaga (Andalusia) in southern Spain, near the town of Álora.

The gorge is famous for a dangerous bridge called Caminito del Rey (King’s little pathway). The path provides access to a hydro-electric plant and took its name after an official visit by Alfonso XIII of Spain in 1921. Official access to the path was removed in 2000 on grounds of safety. At present though the walkway is accessible by climbers, it is dangerous. The local government agreed to share costs of restoration of the “Caminito”.

The gorge runs from the end of the “Embalse del Gaitanejo” to “El Chorro”.

There are two extremely narrow sections at each end of the gorge with a wider bowl in between. In addition to the currently defunct walkway, the old Málaga-Cordoba railway line runs through the gorge in a set of several tunnels, bridges and dams cutting through the gorge.

The railway and sections of the Caminito were used in the final location shots of the 1965 adventure film Von Ryan’s Express.

This entry was posted in Earth, Spain. Bookmark the permalink.