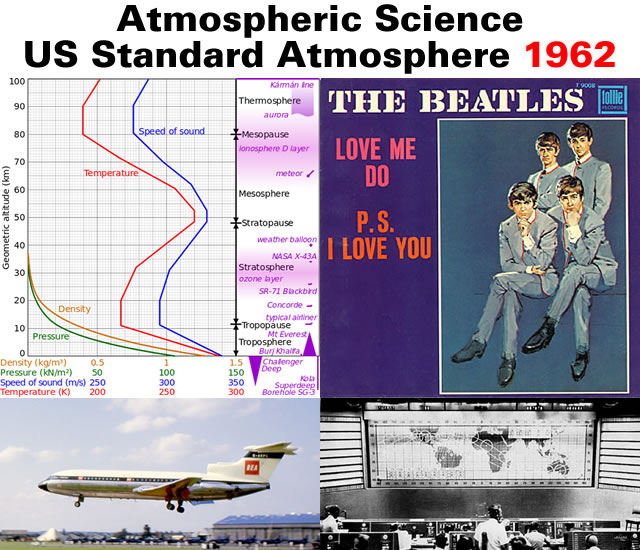 A sad example of the Mushroom Management that is endemic in Wikipedia is the breathtaking inclusion of a diagram [in their Atmosphere of Earth article] based upon the 1962 US Standard Atmosphere.

1962 saw the Beatles release their first single in the United Kingdom. 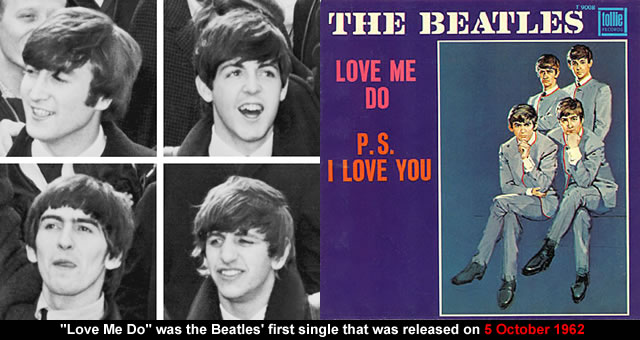 1962 saw the arrival of the trijet airliner.

The first regular color broadcasts in Europe were by the United Kingdom’s BBC2 beginning on July 1, 1967 (PAL).

Scrolling down the Atmosphere of Earth article we find that Wikipedia has included a graph from the NRLMSISE-00 standard atmosphere model.

Temperature and mass density against altitude from the NRLMSISE-00 standard atmosphere model (the eight dotted lines in each “decade” are at the eight cubes 8, 27, 64, …, 729)

NRLMSISE-00 is apparently a model of the “Earth’s atmosphere from ground to space” developed by the US Naval Research Laboratory.

NRLMSISE-00 is an empirical, global model of the Earth’s atmosphere from ground to space. It models the temperatures and densities of the atmosphere’s components. A primary use of this model is to aid predictions of satellite orbital decay due to atmospheric drag. This model has also been used by astronomers to calculate the mass of air between telescopes and laser beams in order to assess the impact of laser guide stars on the non-lasing telescopes.

The model, developed by Mike Picone, Alan Hedin, and Doug Drob, is based on the earlier models MSIS-86 and MSISE-90, but updated with actual satellite drag data. It also predicts anomalous oxygen.

NRL stands for the US Naval Research Laboratory.
MSIS stands for Mass Spectrometer and Incoherent Scatter Radar respectively, the two primary data sources for development of earlier versions of the model.
E indicates that the model extends from the ground through exosphere and 00 is the year of release.

Although NRLMSISE-00 can model the Earth’s atmosphere from ground to space Wikipedia only manages to provide a graph detailing the first 150 kilometres of the atmosphere.

Additionally, the example NRLMSISE-00 graph is not directly comparable with the 1962 US Standard Atmosphere because tucked away on the associated image page we learn that the NRLMSISE-00 graph was produced using the following parameters:

On the positive side these parameters provide a wonderful insight into what the mainstream currently believe controls the density and temperature profiles of the Earth’s atmosphere.

Intriguingly, the NRLMSISE-00 model doesn’t have a parameter for CO2.

An additional bonus is that the Wikipedia article relating to the U.S. Standard Atmosphere provides a graphic detailing the “composition by volume of Earth’s atmosphere” [excluding water vapour] which is more comprehensive than the table provided by Wikipedia in their Atmosphere of Earth article.

Furthermore, this Wikipedia article also provides a link to the 1976 version of the U.S. Standard Atmosphere…

Gallery | This entry was posted in Atmospheric Science, Earth. Bookmark the permalink.