The grand era of the Greenland Gatekeepers drew to a close in the 1990s having bequeathed the Holocene Hockey Stick and Abrupt Climate Change to posterity.

The wider community of Settled Scientists inherited these two key concepts and, more specifically, glaciology inherited the harmonised north-south chronologies [from 1972 and 1984].

The Greenland Gatekeepers would prove to be a hard act to follow and the Settled Scientists faced significant challenges attempting to harmonise the GRIP, GISP-2 and NGRIP ice cores as they emerged from the Greenland Ice Sheet.

Firstly, the Settled Scientists would have to learn how to reconcile a disparate collection of five ice core chronologies from very different domains in the Greenland Ice Sheet.

Secondly, the Settled Scientists would have to learn how to shoehorn this disparate collection of five ice core storylines into the topography of Greenland.

The 3,029 metre GRIP ice core landed in the laps of the Settled Scientists in 1992 just as Willi Dansgaard was retiring.

In 1991 we reached 40,000 years old ice at a depth of 2320 m, and July 12, 1992, the drilling was brought to a full stop, when the cutters hit gravel and pebbles at bedrock 3029 m below surface – world record in ice core drilling.
…
Maybe I should have stopped telling the story at my retirement in 1992 and let my successors tell about the continuation, because they should be given full credit for the further accomplishments and therefore first right to tell about them.

The last hurrah for Greenland Gatekeepers appeared in 1997 when they published a GRIP chronology based upon “a Dansgaard-Johnsen (1969) type flow model”.

This is one of several published depth age scales for the GRIP core.

The d18O values are given in the file gripd18O.dat.

The data for the GRIP chronology “based on a Dansgaard-Johnsen (1969) type flow model” is available on the NOAA website:

The associated δ18O profile for GRIP clearly identifies a transition from the present interglacial period [according to Settled Science] at about 1,600 metres.

This evidently presented the Greenland Gatekeepers with a significant challenge because their Flow Model needed to produce results that were compatible with the Holocene Hockey Stick which has the Holocene starting about 11,700 years ago.

The Holocene is a geological epoch which began at the end of the Pleistocene (at 11,700 calendar years BP) and continues to the present.

Understanding how the Flow Model was adapted to meet these twin constraints [of about 11,700 years at about 1,600 metres] can be achieved by calculating the millimetres of ice core per year from the incremental samples contained within the Flow Model dataset.

These crude artefacts, for example, could be reproduced in a spreadsheet by repeatedly cutting and pasting blocks of incremental values until a desired running total was achieved.

In so doing GISP2 recovered the deepest ice core record in the northern hemisphere (3053.44 meters).

The Greenland Ice Core Project (GRIP), GISP2’s European companion (30km to the east of GISP2 site) penetrated the ice sheet to a depth of 3028.8m one year earlier. 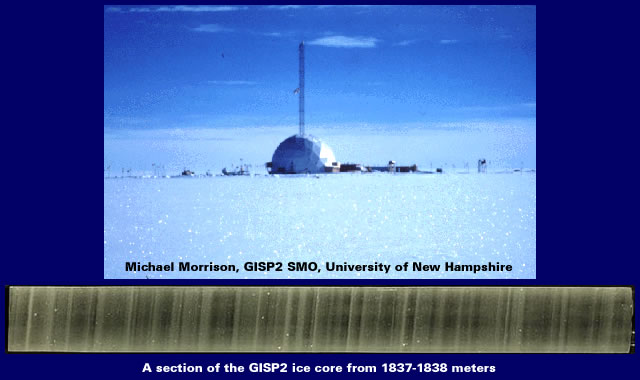 GISP2 produced an ice core 3053.44 meters in depth, the deepest ice core recovered in the world at the time.

It is generally agreed that the order of the strata are disturbed in the GISP2 core.

But that does not necessarily mean that it is also disturbed in the GRIP core, which was drilled on the very Summit where no horizontal ice movement takes place, at least today.

Furthermore, in the GRIP core the Eemian ice lies considerably higher above the bedrock than in the GISP2 core.

And finally, large scale folding seems excluded, because it has not been possible to find the same layer occurring at two or more levels in the GRIP core, i.e. two layers of the same isotopic and chemical composition.

The dating of the GISP-2 ice core seems to have got the Settled Scientists running round in circles trying everything they could think of to account for the first 40,500 years BP of the ice core.

The depth/age relationship for the GISP2 core has been developed from a variety of core parameters including:

Then, in a moment of sheer harmonic genius, the Settled Scientists decided to date below 40,000 BP by “correlating GISP2 into the Vostok chronology” from Antarctica.

This approach to correlation invokes the fact that the d18O of atmospheric O2 varies with time but, at one time, is constant throughout the atmosphere.

Recently annual layer counts based on visual stratigraphy and solid laser light scattering have been extended back to ~110 kyr B.P. (Meese et al. and Ram et al., submitted to the JGR Special Issue).

Thus, in one fell swoop, the GISP-2 ice core was harmonised with Antarctica plus, somehow or other, someone managed to harmonise the GISP2 and GRIP storylines.

Thankfully, the University of Washington provides access to their GISP-2 d18O datasets.

Listed are the GISP2 d18O sample data sets, measured at the University of Washington’s Quaternary Isotope Laboratory, as of March 5, 1999.

This file contains the entire continuous GISP2 delta 18O sample data set (excluding the silty ice samples, which are published separately), measured at the University of Washington’s Quaternary Isotope Laboratory, as of March 5, 1999.

The University of Washington d18O dataset provides a fairly high definition chronology that dates the ice at a depth of 2,808.00 metres at 110,977 years BP.

Their d18O dataset is intriguing because:

1) It clearly shows that the range of d18O values in the modern, uppermost layers of ice embrace about 99% of the values deeper in the core – including most of the d18O values from the last presumed Ice Age.

Having harmoniously digested the GISP-2 ice core the Settled Scientists moved on to the 3,085 metre NGRIP ice core in 2003.

The NGRIP ice core is also slightly different because:
a) NGRIP drilled down to 168 metres below sea level.
b) NGRIP encountered bottom water
c) NGRIP recovered a splinter of wood from the bottom water. 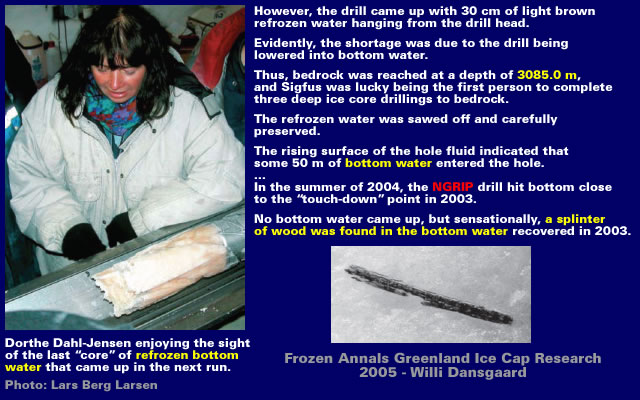 Drilling began in 1999 and was completed at bedrock in 2003.
…
Unusually, there is melting at the bottom of the NGRIP core – believed to be due to a high geothermal heat flux locally.
…
In 2003, NGRIP recovered what seem to be plant remnants nearly two miles below the surface, and they may be several million years old.

“Several of the pieces look very much like blades of grass or pine needles,” said University of Colorado at Boulder geological sciences Professor James White, an NGRIP principal investigator. “If confirmed, this will be the first organic material ever recovered from a deep ice-core drilling project,” he said.

NGRIP is also slightly different because it has been used by the Settled Scientists to partially clean the slate and distance themselves from the GRIP and GISP-2 ice cores.

The NGRIP site was chosen to extract a long and undisturbed record stretching into the last glacial, and it succeeded.

The site was chosen for a flat basal topography to avoid the flow distortions that render the bottom of the GRIP and GISP cores unreliable.
…
This has the advantage that the bottom layers are less compressed by thinning than they would otherwise be: NGRIP annual layers at 105 kyr age are 1.1 cm thick, twice the GRIP thicknesses at equal age.

The NGRIP record helps to resolve a problem with the GRIP and GISP2 records – the unreliability of the Eemian Stage portion of the record.

This break from the past is evident on the NOAA North Greenland Ice Core Project (NGRIP) Ice Core Data page which provides a wide range of information but each entry is [usually] of limited scope.

The NGRIP d18O data displays the familiar pattern established by the GRIP and GISP-2 ice cores although the uppermost layers display a very restrictive range of d18O value primarily because of the coarse 20 year sampling increment employed.

Similarly, in a masterpiece of marketing, the deployment of the [low resolution] 20 year sampling increment effectively masks any artefacts that could be revealed by a high resolution millimetres of ice core per year analysis.

Having resolved NGRIP the Settled Scientists [somehow] produced a three part harmony for Greenland based upon the narratives revealed by the Dye 3, GRIP and NGRIP ice cores.

Clearly, the Settled Scientists have become less holistic in their approach and more sophisticated at managing their message.

These changes suggest the Settled Scientists wish to avoid fundamental issues and awkward questions because they simply don’t “want to be asked that kind of question”.

Being a small country of great strategic importance, and being located very close to the Soviet Union, Denmark refrained in the 1950’es from having nuclear weapons placed on Danish soil.

Therefore, the American request for permission to use Thule for that purpose worked as an elephant in a glassware shop.

However, the official Danish reaction has been called a diplomatic masterpiece:

“The Danish government does not want to be asked that kind of question.”

Sadly, the construction of a hollow three part harmony may well be the crowning glory of the Settled Scientists because it’s become difficult to drill into the “warm” ice of Greenland.

This last field season was obviously fateful to NGRIP, in fact to European drilling in Greenland in a foreseeable future.

In the light of previous drilling successes, the task was “just” to recover the remaining 80 m, but drilling in “warm” ice called for a new technique and a lot of dogged perseverance.

The Dye 3 cores were part of the GISP and, at 2037 meters, the final Dye 3 1979 core was the deepest of the 20 ice cores recovered from the Greenland ice sheet.

The Dye 3 1979 core is not completely intact and is not undamaged.

The physical property of the core progressively improved and below ~1,400 m was of excellent quality.”

The ice core is 2035 m long and has a diameter of 10 cm.
It was drilled with less than 6° deviation from vertical, and less than 2 m is missing.

The deepest 22 m consists of silty ice with an increasing concentration of pebbles downward.

In the depth interval 800 to 1400 m the ice was extremely brittle, and even careful handling unavoidably damaged this part of the core, but the rest of the core is in good to excellent condition.”
…

Summer melting is usually the rule at Dye 3, and there is occasional melting even in north Greenland.

All of these meltings disturb the clarity of the annual record to some degree.

“An exceptionally warm spell can produce features which extend downwards by percolation, along isolated channels, into the snow of several previous years. This can happen in regions which generally have little or no melting at the snow surface as exemplified during mid July 1954 in north-west Greenland. Such an event could lead to the conclusion that two or three successive years had abnormally warm summers, whereas all the icing formed during a single period which lasted for several days. The location where melt features will have the greatest climactic significance is high in the percolation facies where summer melting is common but deep percolation is minimal. Dye 3 in southern Greenland (65°11’N; 43°50’W) is such a location.”

The d18O data for Dye 3 curiously starts at around 82 metres and the observer is left to speculate about the shape of the complete d18O profile where [presumably] the upper layers reveal summer melt features which are “usually the rule” at Dye 3.

The curious shape of the published d18O profile appears to include artefacts that reflect the curious regime of sampling increments chosen.

The curious sampling increment regime suggests a degree of confirmation bias [where you get what you look for] and a degree of cherry picking especially when the uppermost 81 metres have been excluded.