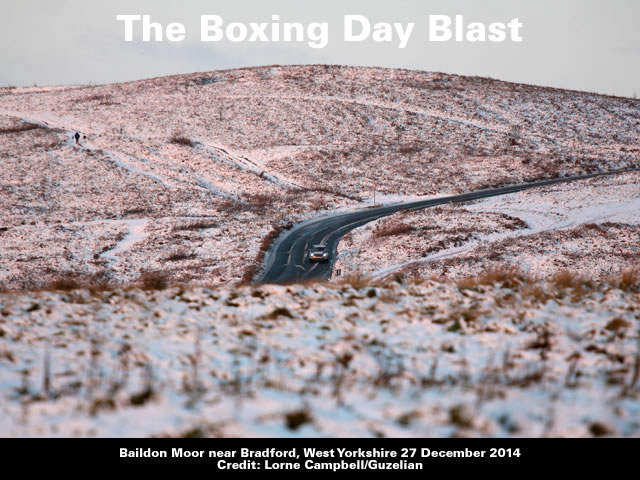 In recent years I have been making an annual pilgrimage to see friends and family which involves flying from Malaga to Dublin [for a few days] and then onwards to Leeds-Bradford before returning home to civilisation.

Making this round trip during the winter can involve delays and cancellations primarily because Leeds-Bradford airport is prone to strong winds and snow.

Therefore, when planning a winter pilgrimage I usually try to avoid any periods of severe weather that are flagged by the long range weather forecasters.

Overall, relying upon the skills of the long range weather forecasters has been generally successful.

However, this year it was the skills and tenacity of Ryan Air that ensured I was delivered safely back to Malaga from Leeds-Bradford on Boxing Day.

This was because the Boxing Day Blast was not predicted by the long range weather forecasters.

Tue 23rd
Piers’ latest Weather Commentary (23 Dec am)
=> WeatherAction mild mobile flow on cue
=> Will snow-blizzard-cold blast hit East UK on 27th? or(/&) later?
Weather Action’s Xmas and late December general weather scenarios are being confirmed firstly with mild / stormy blasts and floods from rain and snow melt (in North).
WeatherAction Solar active R3 period 25-27th will enhance the mobile stormy tendencies.
As mentioned in Comment on Dec 20 the standard models suggestion for a major snow blast on 27th was not in WeatherAction forecast but there was a cold plunge in WeatherAction for end Dec + into Jan.
…

The Boxing Day snow forced the closure of Liverpool Airport but the Ryan Air flight from Leeds Bradford managed to return to it’s Malaga base after some snow clearing, de-icing and wing inspections.

Whilst in England I visited the rather stunning medieval theme park that is called York.

The official history of the cathedral in York [York Minster] displays many of the curious features that are common in first millennium narratives.
1) A vague [citation needed] early period.
2) Destruction by fire.
3) An “obscure” middle period.
4) A substantiated history that only begins in “the 10th century”.

York has had a verifiable Christian presence from the 4th century.
However there is circumstantial evidence pointing to much earlier Christian involvement.

According to Bede missionaries were sent from Rome by Eleutherius at the request of the chieftain Lucius of Britain in AD 180 to settle controverted points of differences as to Eastern and Western ceremonials which were disturbing the church.

Tradition speaks of 28 British bishops, one for each of the greater British cities, over whom presided the Archbishops of London, York and Caerleon-on-Usk.

The first recorded church on the site was a wooden structure built hurriedly in 627 to provide a place to baptise Edwin, King of Northumbria.
Moves toward a more substantial building began in the 630s.
A stone structure was completed in 637 by Oswald and was dedicated to Saint Peter.
The church soon fell into disrepair and was dilapidated by 670 when Saint Wilfrid ascended to the see of York. He repaired and renewed the structure.

The attached school and library were established and by the 8th century were some of the most substantial in Northern Europe.[citation needed]

In 741 the church was destroyed in a fire.
It was rebuilt as a more impressive structure containing thirty altars.

The church and the entire area then passed through the hands of numerous invaders, and its history is obscure until the 10th century.

There was a series of Benedictine archbishops, including Saint Oswald of Worcester, Wulfstan and Ealdred, who travelled to Westminster to crown William in 1066.
Ealdred died in 1069 and was buried in the church.

The church was damaged in 1069 during William the Conqueror’s harrying of the North, but the first Norman archbishop, Thomas of Bayeux, arriving in 1070, organised repairs.
The Danes destroyed the church in 1075, but it was again rebuilt from 1080.
Built in the Norman style, it was 111 m (364.173 ft) long and rendered in white and red lines. The new structure was damaged by fire in 1137 but was soon repaired.
The choir and crypt were remodelled in 1154, and a new chapel was built, all in the Norman style.

The Gothic style in cathedrals had arrived in the mid 12th century.
Walter de Gray was made archbishop in 1215 and ordered the construction of a Gothic structure to compare to Canterbury; building began in 1220.
The north and south transepts were the first new structures; completed in the 1250s, both were built in the Early English Gothic style but had markedly different wall elevations.
A substantial central tower was also completed, with a wooden spire.
Building continued into the 15th century. 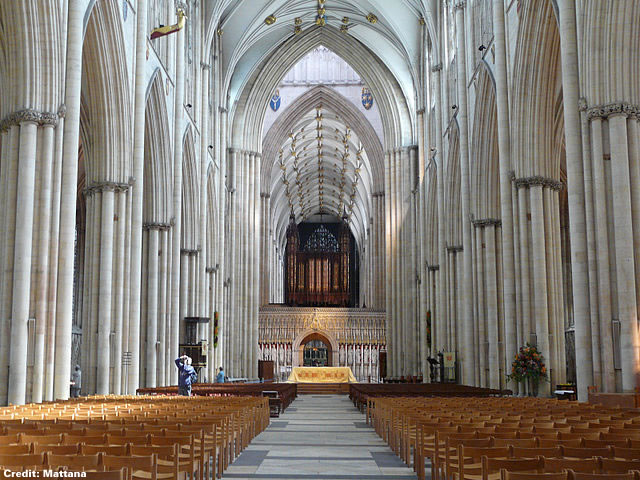 Clearly, the historic narrative for Britain in the first millennium is a shambles.

Fittingly, the centre of York includes a street called The Shambles which was famous for its [meat] butchers whilst the butchers of British history were more likely housed in continental monasteries.

The Shambles (official name Shambles) is an old street in York, England, with overhanging timber-framed buildings, some dating back as far as the fourteenth century. It was once known as The Great Flesh Shambles, probably from the Anglo-Saxon Fleshammels (literally ‘flesh-shelves’), the word for the shelves that butchers used to display their meat. As recently as 1872 there were twenty-five butchers’ shops in the street but now there are none.

Bede (672/673 – 26 May 735), also referred to as Saint Bede or the Venerable Bede (Latin: Bēda Venerābilis), was an English monk at the monastery of Saint Peter at Monkwearmouth and its companion monastery, Saint Paul’s, in modern Jarrow (see Monkwearmouth-Jarrow), Northeast England, both of which were located in the Kingdom of Northumbria.

He is well known as an author and scholar, and his most famous work, Historia ecclesiastica gentis Anglorum (The Ecclesiastical History of the English People) gained him the title “The Father of English History”.

The Historia Ecclesiastica was copied often in the Middle Ages, and about 160 manuscripts containing it survive.
About half of those are located on the European continent, rather than on the British Isles.

Most of the 8th- and 9th-century texts of Bede’s Historia come from the northern parts of the Carolingian Empire.
This total does not include manuscripts with only a part of the work, of which another 100 or so survive.
It was printed for the first time between 1474 and 1482, probably at Strasbourg, France.
…
Copies are sparse throughout the 10th century and for much of the 11th century.

The greatest number of copies of Bede’s work was made in the 12th century, but there was a significant revival of interest in the 14th and 15th centuries.

Many of the copies are of English provenance, but also surprisingly many are Continental.

Sadly, the pricing of railway tickets is also a shambles in the United Kingdom because the journey from Darlington to York cost me more than the flight from Dublin to Leeds-Bradford.

On a brighter note, the long suffering residents of the United Kingdom should be cheered to know that Joe Bastardi has referenced European weather in his latest Saturday Summary.

Gallery | This entry was posted in History. Bookmark the permalink.