Turbines are used to extract rotational energy from moving fluids.

A turbine is a rotary mechanical device that extracts energy from a fluid flow and converts it into useful work.

A turbine is a turbomachine with at least one moving part called a rotor assembly, which is a shaft or drum with blades attached.

Moving fluid acts on the blades so that they move and impart rotational energy to the rotor. 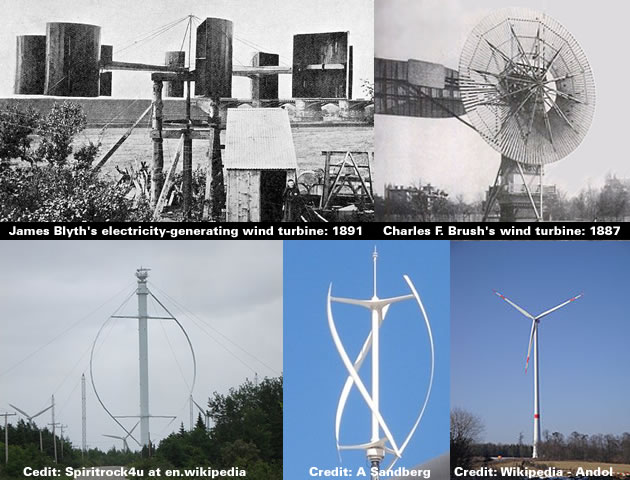 Unsurprisingly, Nature has inspired the design of Turbines.

The Bristol Type 171 Sycamore was the first British-designed helicopter to fly and serve with the Royal Air Force.

Created by the Bristol Aeroplane Company, it was used for search and rescue and anti-submarine warfare.

The name refers to the seeds of the Sycamore tree, Acer pseudoplatanus, which fall with a rotating motion.

Major discoveries always come with a story: Newton had his apple, Archimedes had his bath tub, and Dr. Frank E. Fish, while shopping for a gift, examined a sculpture of a humpback whale in a shop and issued a fatefully inaccurate observation:
“Look at that. The sculptor put the bumps on the wrong side of the flipper.”

The shop manager quickly set him straight.
She knew the sculptor’s work and that the sculptor knew humpbacks: That’s where the bumps should be.

A quick check and Frank was convinced the artist got it right.
But if the artist was right then at least part of the science of fluid dynamics was wrong.

Marine scientists have long suspected that humpback whales’ incredible agility comes from the bumps on the leading edges of their flippers.

Now Harvard University researchers have come up with a mathematical model that helps explain this hydrodynamic edge.

The work gives theoretical weight to a growing body of empirical evidence that similar bumps could lead to more-stable airplane designs, submarines with greater agility, and turbine blades that can capture more energy from the wind and water.
…
Already, attempts are being made to incorporate the tubercle design into commercial products. Fish is president of a venture based in Toronto, Ontario, called WhalePower, which has begun demonstrating the advantages of tubercles when they’re integrated into the leading edges of wind-turbine and fan blades.

The tubercles of the humpback whale flipper may function to generate vortices by excitation of flow to maintain lift and prevent stall at high angles of attack.

Unfortunately, Settled Science has displayed a distinct lack of enthusiasm towards Nature when it comes to Hannes Alfven’s suggestion that “magnetohydrodynamics waves” can “transfer momentum from the Sun to the planets”.

Magnetohydrodynamics (MHD) is the study of the dynamics of electrically conducting fluids.

Examples of such fluids include plasmas, liquid metals, and salt water or electrolytes.
…
The field of MHD was initiated by Hannes Alfvén, for which he received the Nobel Prize in Physics in 1970.

The fundamental concept behind MHD is that magnetic fields can induce currents in a moving conductive fluid, which in turn creates forces on the fluid and also changes the magnetic field itself.
…
The first recorded use of the word magnetohydrodynamics is by Hannes Alfvén in 1942:

“At last some remarks are made about the transfer of momentum from the Sun to the planets, which is fundamental to the theory. The importance of the magnetohydrodynamic waves in this respect are pointed out.”

…
Astrophysics and cosmology
MHD applies quite well to astrophysics and cosmology since over 99% of baryonic matter content of the Universe is made up of plasma, including stars, the interplanetary medium (space between the planets), the interstellar medium (space between the stars), the intergalactic medium, nebulae and jets.
…
Sunspots are caused by the Sun’s magnetic fields, as Joseph Larmor theorized in 1919.

The solar wind is also governed by MHD.
The differential solar rotation may be the long term effect of magnetic drag at the poles of the Sun, an MHD phenomenon due to the Parker spiral shape assumed by the extended magnetic field of the Sun.

This lack of enthusiasm is really surprising because:
1) The concept of a Turbine can easily be understood by kids [and even Settled Scientists].

With scissors, cut a square out of a piece of thin cardboard.
A piece from an index card or an empty box of tissues works well.
…
Bend one corner toward you.
Bend the opposite corner away from you.
…
You have made a turbine.

2) Settled Sciences acknowledges the Sun is a Magnetohydrodynamic System.

The sun is an MHD system that is not well understood.

3) Johannes Kepler [1571-1630] demonstrated by his Third Law of Planetary Motion [in 1619] that the Solar System displays the cohesive rotational properties of a dynamic system.

4) Planetary rotation periods in the Solar System display the cohesive rotational properties of a dynamic system.

5) The Solar Wind distributes kinetic energy from the Sun.

The solar wind is divided into two components, respectively termed the slow solar wind and the fast solar wind.

By contrast, the fast solar wind has a typical velocity of 750 km/s, a temperature of 8×105 K and it nearly matches the composition of the Sun’s photosphere.

The slow solar wind is twice as dense and more variable in intensity than the fast solar wind.

The slow wind also has a more complex structure, with turbulent regions and large-scale structures.

The slow solar wind appears to originate from a region around the Sun’s equatorial belt that is known as the “streamer belt”.

6) The Solar Wind distributes electromagnetic energy from the Sun.

The solar wind is a stream of plasma released from the upper atmosphere of the Sun.
It consists of mostly electrons and protons with energies usually between 1.5 and 10 keV.
…
The solar wind flows outward supersonically to great distances, filling a region known as the heliosphere, an enormous bubble-like volume surrounded by the interstellar medium.
…
The heliospheric current sheet results from the influence of the Sun’s rotating magnetic field on the plasma in the solar wind.

Depending on the hemisphere and phase of the solar cycle, the magnetic field spirals inward or outward; the magnetic field follows the same shape of spiral in the northern and southern parts of the heliosphere, but with opposite field direction.
…
The plasma in the interplanetary medium is also responsible for the strength of the Sun’s magnetic field at the orbit of the Earth being over 100 times greater than originally anticipated.

If space were a vacuum, then the Sun’s magnetic dipole field, about 10−4 teslas at the surface of the Sun, would reduce with the inverse cube of the distance to about 10−11 teslas.

But satellite observations show that it is about 100 times greater at around 10−9 teslas.

Magnetohydrodynamic (MHD) theory predicts that the motion of a conducting fluid (e.g. the interplanetary medium) in a magnetic field, induces electric currents which in turn generates magnetic fields, and in this respect it behaves like a MHD dynamo.

A visual examination of the Earth’s Plasmasphere [in cross-section] reveals an asymmetrical shape [with a “dusk bulge”] which suggests the Plasmasphere can function as a Turbine.

The Earth’s Plasmasphere – Windows to the Universe
http://www.windows2universe.org/glossary/plasmasphere.html

Although the shape and size of the Earth’s Plasmasphere is not constant there are clear indications [when looking down over the Northern Hemisphere] that the Plasmasphere can function as a Solar Wind Turbine. 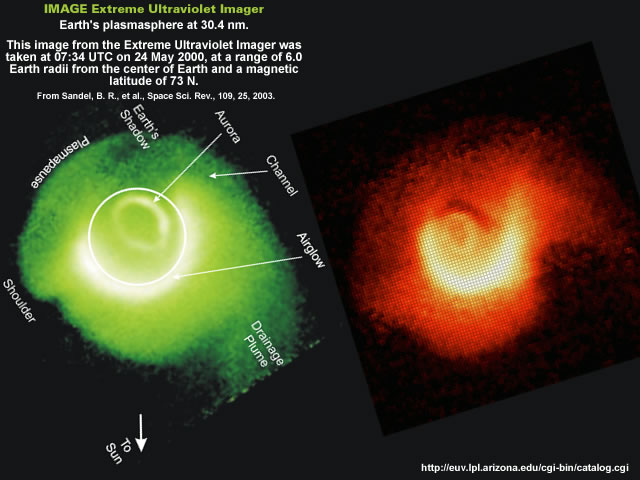 Results from Ulysses that Motivate the Solar Probe Mission
http://solarscience.msfc.nasa.gov/people/suess/SolarProbe/Page3.htm

Unsurprisingly, tracking the Earth’s Fluctuations in Length of Day displays a clear annual cycle that indicates the Earth’s Solar Wind Turbine rotates faster when it is closer to the Sun [Periapsis in January] and slower when it is farthest from the Sun [Apoapsis in July].

Footnotes
The 243 day retrograde rotation period of Venus suggests that its Solar Wind Turbine is currently slowing its rate of rotation [as confirmed by ESA’s Venus Express spacecraft].

New measurements from ESA’s Venus Express spacecraft shows that Venus’ rotation rate is about 6.5 minutes slower than previous measurements taken 16 years ago by the Magellan spacecraft.

Using infrared instruments to peer through the planet’s dense atmosphere, Venus Express found surface features weren’t where the scientists expected them to be.

However, these long rotation periods are explicable if these bodies were once outer moons [located between Titan and Iapetus] of the planet Saturn.