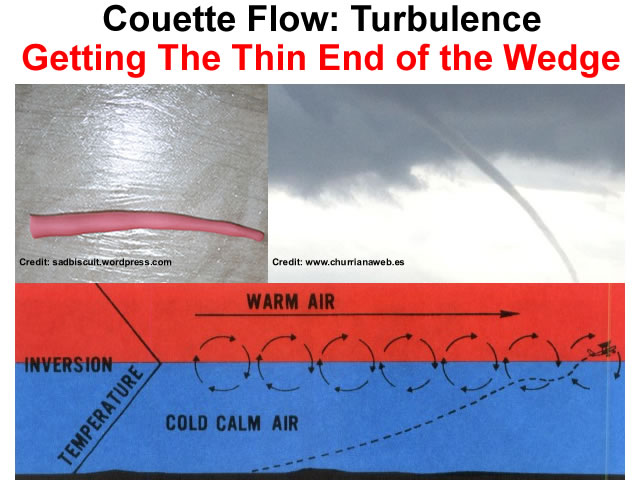 Laminar Flow is characterised by adjacent layers sliding past one another like playing cards.

In fluid dynamics, laminar flow (or streamline flow) occurs when a fluid flows in parallel layers, with no disruption between the layers.

At low velocities, the fluid tends to flow without lateral mixing, and adjacent layers slide past one another like playing cards.

There are no cross-currents perpendicular to the direction of flow, nor eddies or swirls of fluids.

In laminar flow, the motion of the particles of the fluid is very orderly with all particles moving in straight lines parallel to the pipe walls.

Turbulent Flow is “characterized by chaotic property changes” where “unsteady vortices appear on many scales”.

In fluid dynamics, turbulence or turbulent flow is a flow regime characterized by chaotic property changes.

This includes low momentum diffusion, high momentum convection, and rapid variation of pressure and flow velocity in space and time.
…
In turbulent flow, unsteady vortices appear on many scales and interact with each other.

The structure and location of boundary layer separation often changes, sometimes resulting in a reduction of overall drag.
…
Nobel Laureate Richard Feynman described turbulence as “the most important unsolved problem of classical physics.” 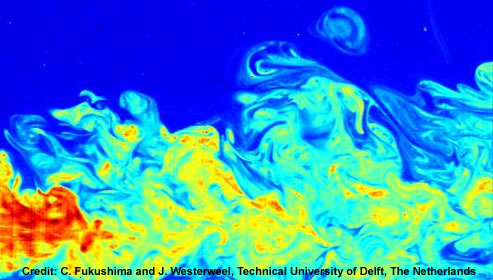 However, describing Turbulence as simply “chaotic” is misleading because Turbulence generates many different [structured flow] patterns which are easily recognised.

The tendency of Turbulence to create “vortices” [on many scales] in these structured flow patterns is [perhaps] best visualised by simply rubbing your hands together.

Rubbing your hands together usually creates very small, round sausage like structures from the boundary layer [of dead skin and dirt] between your hands.

Larger, round sausage like structures are also be created if you place a layer of plasticine [or pastry] between your hands before rubbing.

A similar visualisation technique can be used to envisage air turbulence.

Wind shear in a zone between relatively calm wind below an inversion and strong wind above the inversion.
This condition is most common at night or in early morning.
It can cause an abrupt turbulence encounter at low altitude.

Visualising the development of “vortices” from these sausage like structures can be readily achieved by introducing lateral [angled] movement whilst rolling plasticine on a table.

A similar visualisation technique can be used to envisage wake turbulence.

The lateral [angled] rolling of plasticine tends to develop tapered “vortices” and this natural feature of Turbulence helps explain the development of tornados and water spouts.

Many of these structured flow patterns can be observed in clouds.

The altostratus undulatus is a type of altostratus cloud with signature undulations within it.
…
The wavy strips of clouds are generally near an inversion surface.

Cirrocumulus undulatus is a variety of cirrocumulus cloud.
…
They have a rippled appearance due to wind shear and usually cover only a small portion of the sky.
They appear in bands as small patches or layers.
Occasionally, they comprise two or more wave forms superposed upon one another.
The individual cloudlets can either be circular, or elongated in the direction of the rows.

The altocumulus undulatus is a mid-level cloud (about 8000 – 20,000 ft or 2400 – 6100 m), usually white or grey with layers or patches containing undulations that resemble “waves” or “ripples” in water.
…
They result from wind shear (an abrupt speed or directional shifting in the wind, acutely changing with height). Lines one might see indicate the direction of the shear.

The Kelvin–Helmholtz instability (after Lord Kelvin and Hermann von Helmholtz) can occur when there is velocity shear in a single continuous fluid, or where there is a velocity difference across the interface between two fluids.

The multiplicity of repeating [structured] flow patterns that develop in Turbulence depends upon many factors such as surface shape, viscosity, velocity, density and the forces involved.

In fluid dynamics, a Kármán vortex street (or a von Kármán vortex sheet) is a repeating pattern of swirling vortices caused by the unsteady separation of flow of a fluid around blunt bodies.

The Richtmyer–Meshkov instability (RMI) occurs when two fluids of different density are accelerated.

Normally this is by the passage of a shock wave.

The development of the instability begins with small amplitude perturbations which initially grow linearly with time.

A chaotic regime eventually is reached and the two fluids mix.

The Rayleigh–Taylor instability, or RT instability (after Lord Rayleigh and G. I. Taylor), is an instability of an interface between two fluids of different densities which occurs when the lighter fluid is pushing the heavier fluid.

Examples include supernova explosions in which expanding core gas is accelerated into denser shell gas, instabilities in plasma fusion reactors, and the common terrestrial example of a denser fluid such as water suspended above a lighter fluid such as oil in the Earth’s gravitational field.
…
As the RT instability develops, the initial perturbations progress from a linear growth phase into a non-linear or “exponential” growth phase, eventually developing “plumes” flowing upwards (in the gravitational buoyancy sense) and “spikes” falling downwards.
…
This process is evident not only in many terrestrial examples, from salt domes to weather inversions, but also in astrophysics and electrohydrodynamics. 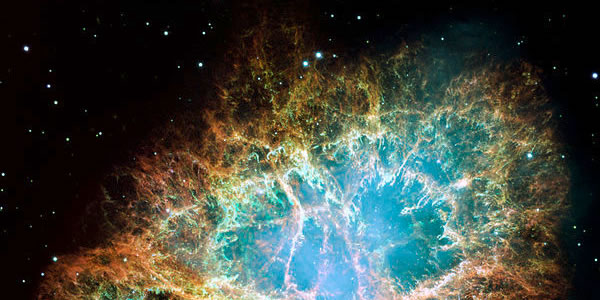 RT instability structure is also evident in the Crab Nebula, in which the expanding pulsar wind nebula powered by the Crab pulsar is sweeping up ejected material from the supernova explosion 1000 years ago.

The RT instability has also recently been discovered in the Sun’s outer atmosphere, or solar corona, when a relatively dense solar prominence overlies a less dense plasma bubble.

Rayleigh–Bénard convection is a type of natural convection, occurring in a plane horizontal layer of fluid heated from below, in which the fluid develops a regular pattern of convection cells known as Bénard cells.

The Kelvin–Helmholtz instability (after Lord Kelvin and Hermann von Helmholtz) can occur when there is velocity shear in a single continuous fluid, or where there is a velocity difference across the interface between two fluids.

An example is wind blowing over water: The instability manifests in waves on the water surface.

However, Settled Science has a very ambivalent attitude towards Fluid Mechanics.

An example is wind blowing over water:
The instability manifests in waves on the water surface.

While the Wikipedia entry for Wind Waves makes no mention of Kelvin–Helmholtz instabilities.

In fluid dynamics, wind waves, or wind-generated waves, are surface waves that occur on the free surface of oceans, seas, lakes, rivers, and canals or even on small puddles and ponds. They result from the wind blowing over an area of fluid surface.
…
Wind waves have a certain amount of randomness: subsequent waves differ in height, duration, and shape with limited predictability.
…
If we suppose a very flat sea surface (Beaufort number, 0), and sudden wind flow blows steadily across the sea surface, physical wave generation process will be like;

3. The interactions between the waves on the surface generate longer waves (Hasselmann et al., 1973) and the interaction will transfer wave energy from the shorter waves generated by the Miles mechanism to the waves have slightly lower frequencies than the frequency at the peak wave magnitudes, then finally the waves will be faster than the cross wind speed (Pierson & Moskowitz).

Clearly, Settled Science is concerned that Fluid Mechanics is the thin end of the wedge that threatens to undermine many sacred tenets of their antiquated belief system.

The thin end of the wedge is something small and seemingly unimportant that will lead to something much bigger and more serious.

Sadly, that means students of science are getting the thin end of the wedge when Settled Science ignores Fluid Mechanics.

This entry was posted in Astrophysics, Atmospheric Science, Fluid Mechanics, Science, Vortices. Bookmark the permalink.
×
%d bloggers like this: