As Above So Below – Nassim Haramein

Therefore, the focus of this posting is to highlight a few elements of his Natural Philosophy that might catch your attention and encourage you to discover more.

His Natural Philosophy [and his presentation style] is not to everyone’s taste but it is extremely thought provoking and it’s well worth [in my opinion] spending some time watching his presentations because Nassim Haramein provides a very different perspective on the Universe.

At school Nassim Haramein was taught about dimensions.

Dimension Three is the cube
and it does exist because it encloses space. 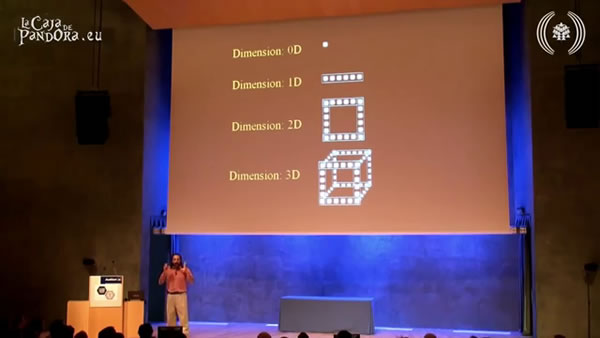 Nassim Haramein argues the mainstream Dimension Three can’t exist because the mainstream has constructed their 3D cube using dots, lines and squares that [all] don’t exist i.e. you cant build something out of nothing.

Nassim Haramein states the only thing that does exist is the dot.

Clearly, this is a philosophical perspective that is not shared by the Particle Accelerator guys at CERN who are busy [and will be busy until the End of Time] smashing atoms into ever decreasing pieces provided we keep supplying them with bigger and bigger toys. 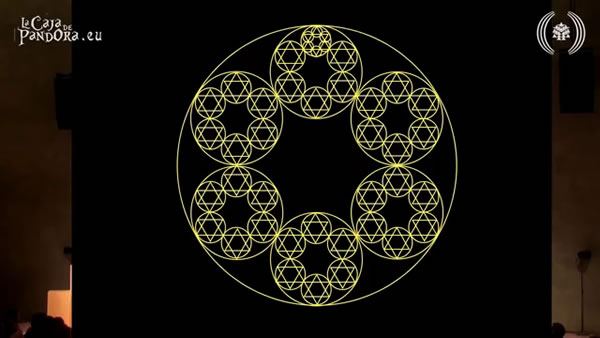 This geometric process of sub-division can be continued forever [because it is always possible to divide a dimension by two] or until you realise than an infinite number of subdivisions are contained within a finite space.

Therefore, Nassim Haramein argues that its not matter that defines space but that it is the boundary conditions within space that defines matter.

Furthermore, he argues science needs to concentrate upon boundary conditions in space [which accounts for 99.99999 % of the known Universe] instead of focusing upon fundamental particles.

Nassim Haramein is also a wonderful story teller and he frequently provides comic relief [usually at the expense of Settled Science] so that his presentation aren’t too intense.

Some of his anecdotes veer towards stand-up comedy and his Egyptian Pyramid routine is very educational [and very amusing].

Other stories veer towards tragic comedy.

In a meeting with Settled Scientists Nassim Haramein interrupted the flow when he displayed to the meeting a diagram from a mainstream textbook that attempts to illustrated how the Universe is expanding [following the Big Bang] and asked “Who is this guy?”

The meeting collectively held its breath because the Settled Scientists though he was going to mention the G word [God] which has been banished from science.

Instead, he observed, if this guy is meant to be blowing up the Universe [like a balloon] then his lungs must be contracting!

Needless to say the Big Bangers didn’t appreciate being reminded that for every action there is meant to be an equal and opposite reaction and that this implies parts of the Universe are expanding whilst other parts are simultaneously contracting.

He then observes that most of our physics is about exploding/expanding stuff [a very male approach to science] and that very little attention is paid to the compression of energy that much occur before any explosion can occur.

Returning to his main thread Nassim Haramein states the vacuum is infinitely dense and science has been ignoring this for a century because “it has no physical meaning”.

He illustrates this point by referring to a mainstream textbook which states present-day quantum field theory “gets rid by a renormalization process of an energy density in the vacuum that would formally be infinite if not removed by this renormalization”.

Therefore, he concludes, if this infinite energy density [in the vacuum] is defined by an infinite number of frequencies then most of these frequencies would cancel out and the vacuum would appear to be empty [nothing].

However, where there is a little bit of organisation [frequency coherence] then this would give rise to boundary conditions and [what we call] the material world.

This is just the first few steps in the Natural Philosophy of Nassim Haramein.

If you wish to lean move then please view the Youtube videos below.

The videos take you step by step towards the Schwarzchild Proton [and beyond].

We review our model of a proton that obeys the Schwarzschild condition.

We find that only a very small percentage (˜10-39%) of the vacuum fluctuations available within a proton volume need be cohered and converted to mass-energy in order for the proton to meet the Schwarzschild condition.

We calculate that two contiguous Schwarzschild protons would rotate at c and have a period of 10-23 s and a frequency of 1022 Hz which is characteristic of the strong force interaction time and a close approximation of the gamma emission typically associated with nuclear decay.

We include a scaling law and find that the Schwarzschild proton data point lies near the least squares trend line for organized matter.

Using a semi-classical model, we find that a proton charge orbiting at a proton radius at c generates a good approximation to the measured anomalous magnetic moment.

The solution is a useful approximation for describing slowly rotating astronomical objects such as many stars and planets, including Earth and the Sun. The solution is named after Karl Schwarzschild, who first published the solution in 1916.

The underlying duality of Nassim Haramein’s Natural Philosophy suggests perceived objects are the radiative [white hole] side of a black hole and that there is a black hole at the centre of every atom.

Gallery | This entry was posted in As Above So Below, Astrophysics, Science. Bookmark the permalink.

4 Responses to As Above So Below – Nassim Haramein