Will There be a War on Ants? 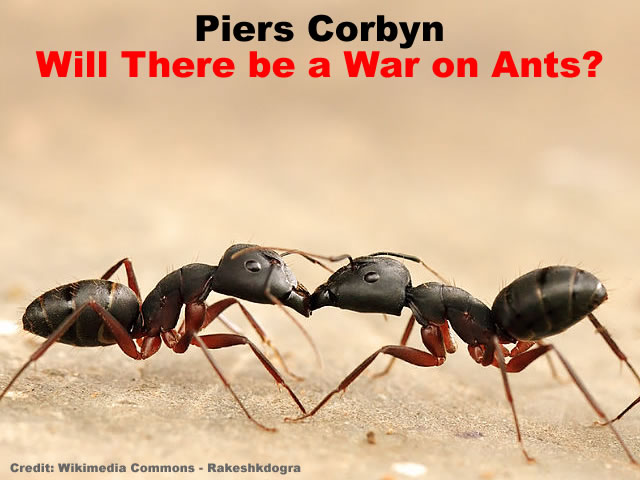 Piers Corbyn once again introduces some perspective and sanity into the CO2 Climate Change debate.

THE CASE AGAINST MAN MADE CLIMATE CHANGE IS SIMPLE

1. There is no evidence now and there never has been in real world data for CO2 levels controlling world temperatures.

2. Man’s CO2 flux in and out of atmosphere is only 4% of total. The idea that this dominates the other very variable 96% is deranged – slides 1+3 of pdf link above

The fact that termites produce ten times the CO2 equivalent of man means Obama and the Pope would do better at reducing CO2 by declaring WAR ON TERMITES.

Interestingly all Obama’s wars hitherto have upset the stability of middle-east oil production to the benefit of USA oil production (the USA is now an energy exporter not nett importer).

3. World sea temperatures control CO2 levels under very basic laws of physics so over thousands of years sea temperaures (which follow solar activity) LEAD CO2 levels by some hundreds of years, see slides 7+8 in pdf. This is an observed fact.

In everyday life if you warm a glass of fizzy drink CO2 comes off and if you cool it then it will absorb more CO2.

The deranged CO2 theory will have you believe that putting extra CO2 above a glass of drink (or anything) will warm it up.

Of course this idea is a deranged tail-wagging dog nonsense.

If you are delusionally obsessed about atmospheric CO2 then Piers Corbyn highlights that it is more rationale to focus upon the ANT in Anthropomorphic Global Warming i.e. Formic Global Warming.

Scientists have calculated that termites alone produce ten times as much carbon dioxide as all the fossil fuels burned in the whole world in a year.

Pound for pound, the weight of all the termites in the world is greater than the total weight of humans.

Scientists estimate that, worldwide, termites may release over 150 million tons of methane gas into the atmosphere annually. In our lower atmosphere this methane then reacts to form carbon dioxide and ozone.

It is estimated that for every human on Earth there may be 1000 pounds of termites.

On the average Termites expel gas composed of about 59% nitrogen, 21% hydrogen, 9% carbon dioxide, 7% methane, and 4% oxygen.

It is thought “There are 2,600 different species of termites, and it is estimated that there are at least a million billion individual termites on Earth, that they emit two and four percent of the global carbon dioxide and methane budget, respectively-both mediated directly or indirectly by their microbes.

Termites eat cellulose, but they can not digest it without the help of microorganisms in their gut. Single-celled protozoan are the primary organisms that break the bonds that turn cellulose into units of glucose, and from there, the termite can break the glucose bonds, release the energy, and give off carbon dioxide and water.

The Science magazine reports that termites annually generate more than twice as much carbon dioxide as mankind does burning fossil fuels. One termite species annually emits 600,000 metric tons of formic acid into the atmosphere, an amount equal to the combined contributions of automobiles, refuse combustion and vegetation.

The damage caused by wood-destroying insects has an important economic effect. Nationwide, the cost of control and repair of damage nears $5 billion per year; the outlay in California and Hawaii exceeds $1 billion per year (Brier et al. 1988, Su and Scheffrahn 1990). In California, subterranean and drywood termites are responsible for >95% of all costs resulting from wood-destroying insects (Brier 1987, Rust et al. 1988). Damage by drywood termites is more common in southern California (Wilcox 1979).

Let’s hope that the Pope, the POTUS, Jeremy Corbyn and the CO2 Fear Mongers learn to differentiate between ants and humans before they do any more squishing and squashing.

Jeremy, 66, was one of more than 400 MPs who signed an parliamentary Early Day Motion on climate change, leading to the 2008 Climate Change Act and ambitious carbon reduction targets for 2050.

He has also taken a lead in campaigning on the issue, including taking part in a mass climate change lobby outside parliament in May.

I’m not holding my breath.

Gallery | This entry was posted in Atmospheric Science, Inventions & Deceptions. Bookmark the permalink.

6 Responses to Will There be a War on Ants?