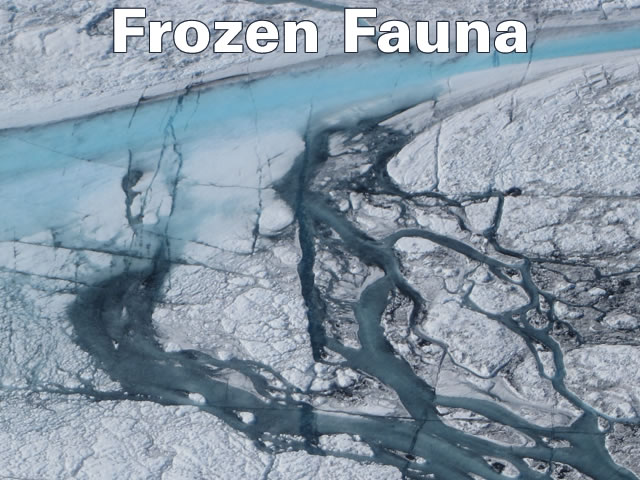 One of the important concepts that Earth Scientists should be aware of is that Life on Earth is generally deemed to be dormant at −18 °C [or below].

Conversely, Life on Earth is generally deemed to be active from around −17 °C up to an uncertain upper limit that may be as high as 151 °C.

Therefore, when Earth Scientists consider the frozen desolation of an ice sheet [glacier or ice core] they should not simply presume that the ice is devoid of life.

Life is remarkably tenacious even in the harshest of conditions.

Scientists find translucent fish in a wedge of water hidden under 740 meters of ice, 850 kilometers from sunlight

Stunned researchers in Antarctica have discovered fish and other aquatic animals living in perpetual darkness and cold, beneath a roof of ice 740 meters thick.

The animals inhabit a wedge of seawater only 10 meters deep, sealed between the ice above and a barren, rocky seafloor below – a location so remote and hostile the many scientists expected to find nothing but scant microbial life.

Lake Vostok, Antarctica’s biggest and deepest subsurface lake, might contain thousands of different kinds of tiny organisms – and perhaps bigger fish as well, researchers report.
…
More than 3,500 different DNA sequences were identified in samples extracted from layers of ice that have built up just above the surface of the lake.

About 95 percent of them were associated with types of bacteria, 5 percent of them had the hallmarks of more complex organisms known as eukaryotes, and two of the sequences were linked to a distinct class of one-celled organisms called archaea.

The sequences included close matches for various types of fungi as well as arthropods, springtails, water fleas and a mollusk.

Tardigrades are small, inconspicuous invertebrates that live quietly in almost every habitat we know of.

If there is water, there will be probably be active Tardigrades.

Even where there isn’t water they have a remarkable ability to enter a hibernation state that allows them to survive freezing and drying out.

They have been found at both poles, 20,000ft up mountains in the Himalaya to 14,000ft deep on the ocean floor…

Tardigrades are most common in moist environments, but can stay active wherever they can retain at least some moisture.

Tardigrades are one of the few groups of species that are capable of reversibly suspending their metabolism and going into a state of cryptobiosis. 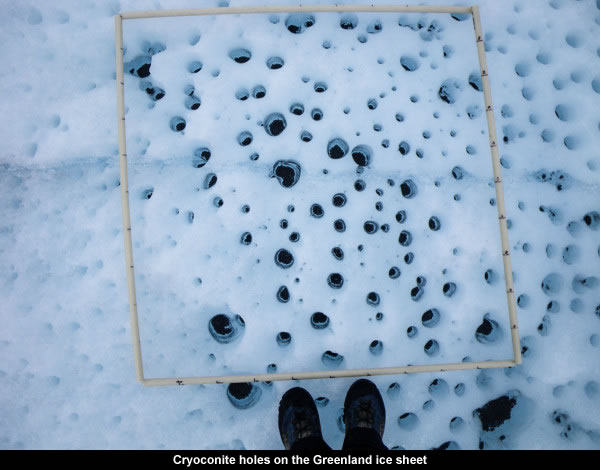 Cryoconite is powdery windblown dust made of a combination of small rock particles, soot and microbes which is deposited and builds up on snow, glaciers, or ice caps.

It has been reported from glaciers in many parts of the world: Arctic, Antarctic, Greenland, Canada, Tibet, and Himalayas.
…
Cryoconite holes have been suggested to play important roles in the glacier ecosystems because many kinds of living organisms have been reported from this structure on the glaciers, for example, algae, rotifer, tardigrada, insects and ice worm.

Black and Bloom: Understanding melting of the Greenland Ice Sheet
University of Leeds – School of Earth and Environment – 30 June 2015
http://www.see.leeds.ac.uk/news/news-inner/black-and-bloom-understanding-melting-of-the-greenland-ice-sheet/

Snow and ice algae are cold-tolerant algae growing on snow and ice and have been reported on snow fields and glaciers in many parts of the world.

The color is caused by red-pigmented Chlorophyta (green algae, usually Chamydomonas nivalis) and has been well studied taxonomically and physiologically on snow fields.

More than 100 species of snow algae have been reported in the world and they are mainly green algae or cyanobacteria.

Ice worms are annelids of the genus Mesenchytraeus.
They are the only annelid worms known to spend their entire lives in glacial ice.
…
These glacier ice worms can be found on glaciers in Alaska, Washington, Oregon and British Columbia. They have not been found in other glaciated regions of the world.

The specific name solifugus is Latin for “sun-avoiding,” as ice worms retreat underneath the ice before dawn.

Enzymes in ice worms have very low optimal temperatures, and can be denatured at even a few degrees above 0 °C (32 °F).

When ice worms are exposed to temperatures as high as 5 °C (41 °F), their membrane structures disassociate and fall apart (i.e., “melt”) causing the worm itself to “liquefy.”

Ice worms are several centimeters long, and can be black, blue, or white.

They come to the surface of the glaciers in the evening and morning.

We quantified anaerobic N2 production through bacterial denitrification and anaerobic NH4+ oxidation (anammox) in first-year ice from Young Sound (74° N) and in an ice floe off Northeast Greenland (79° N).

A knowledge gap in the Nitrogen Cycle was first identified in 1932.

Therefore, it was “a great surprise” when this knowledge gap was finally filled in 1999 by the discovery of the Anammox bacteria.

Most methanogens can grow on CO2 and H2 as their sole energy source.

It has been located in freshwater and marine sediments, decaying leaves and garden soils, oil wells, sewage and animal waste digesters and lagoons, thermophilic digesters, feces of herbivorous animals, and the rumens of ungulates.

Further, the species of Methanosarcina grow between 1 to 35°C with the optimal temperature of around 25°C.

Figure 5 shows the surprising results of the study by Tung et al. (2005) of microorganisms in the 3040 m of GISP2 glacial ice, which led them to propose a scenario in which the microorganisms were exhumed from the 14-m thickness of silty ice underneath.

The top two panels, from measurements of trapped methane sampled every few meters of depth (Brook, unpublished results), shows concentrations that range from ~350 to ~750 ppbv, in strong correlation with climate, with the exception of anomalously high values at three depths: 2954, 3018 and 3036 m.

To see whether the large excesses might be due to microbial metabolism, Tung et al. (2005) enumerated cells stained with Syto-23, observed with epifluorescence microscopy and shown in the middle panels, and methanogens, detected via the blue-green auto-fluorescence of their F420 coenzyme.

They found excesses of both methanogens and Syto-23-stained cells at those three depths.

At 3000 m there were also high concentrations of stained cells and of methanogens, but Brook did not measure methane at that depth.

At 2238 m they saw an excess of stained cells; again, at that depth Brook did not measure methane.

The interpretation of those regions by Tung et al. (2005) was that jerky ‘stick-slip’ glacial flow of ice across a frozen wetland repeatedly scraped thin layers of microbe-rich ice off of the silty region, intermixing it with glacial ice at distances up to nearly 100 m above the interface between silt and ice.

Evidently, life is abundant on, in and under ice sheets and glaciers.

We suggest that the surface of the Greenland Ice Sheet receives a “baseline” cell supply via deposition of atmospheric waters, and that wind-borne dust deposited on the ice sheet likely contains additional cells and may provide limiting nutrients for microbial growth.

Ablation areas with high dust concentrations and longer melt seasons are therefore expected to contain higher numbers of active microbes compared to the accumulation area and those portions of the ablation are that contain little dust and are primarily seeded with atmospheric
waters.

Whenever these life forms are active they will impact the chemical characteristics of the ice.

Therefore, when analysing the chemical composition of an ice core is it not safe to assume that the ice is as pure as the driven snow.