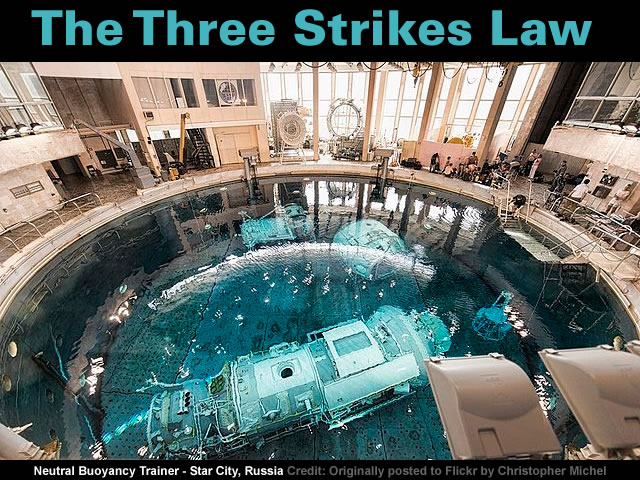 In the United States, habitual offender laws (commonly referred to as three-strikes laws) are statutes enacted by state governments which mandate courts to impose harsher sentences on those convicted of an offense if they have been previously convicted of two prior serious criminal offenses. They are designed to incapacitate those more likely to commit crime.

NASA called an early halt to a British astronaut’s spacewalk after water leaked in his American colleague’s spacesuit.
…
In 2013 Italian astronaut Luca Parmitano nearly drowned in his spacesuit after a serious water leak and had to be rushed back into the ISS. Similarly singing astronaut Chris Hadfield was blinded by water on his first spacewalk after irritation caused his eyes to tear up and, with no gravity, settled over his eyes.

Published on 25 Feb 2015
A NASA astronaut had to return to the International Space Station after his helmet started to fill with water during a spacewalk. Terry Virts was conducting a seven hour mission outside the ISS when the potentially deadly problem occurred.

Star City is a common name of an area in Moscow Oblast, Russia, which has since the 1960s been home to the Yuri Gagarin Cosmonaut Training Center (GCTC).

Officially, the area was known as “closed military townlet No. 1” and at various times had also been designated as Shchyolkovo-14 and Zvyozdny.

Therefore, independent observers might like to don their thinking caps [with optional tin foil] while pondering the realities of space [skip to around 7:07 to dive straight into the ISS specific issues].

It’s beginning to look like two illusions from the 1960s [finally] died this week.

He was a figure in popular music for over five decades, and was considered by critics and other musicians as an innovator, particularly for his work in the 1970s.