The Round Belfries of Ireland

Edwin Richard Wyndham-Quin was an Irish Lord, a Conservative Member of Parliament for a Welsh constituency [Glamorganshire] and an archaeologist who [we are assured] helped to establish “a sound school of archaeology” in Ireland.

Edwin Richard Wyndham-Quin, 3rd Earl of Dunraven and Mount-Earl KP PC (19 May 1812 – 6 October 1871) was a British peer, Member of Parliament, and archaeologist.
…
Along with George Petrie, Lord Dunraven is credited with “laying the foundations of a sound school of archaeology” in Ireland.
…
Wyndham-Quin was educated at Eton and at Trinity College, Dublin, graduating BA in 1833.

He converted to Roman Catholicism in 1855.
…
As Viscount Adare, he sat as the Conservative MP for Glamorganshire from the General Election in July 1837 to 1851.
…
Dunraven was deeply interested in intellectual pursuits.

For three years he studied astronomy under William Rowan Hamilton in the Dublin observatory, and acquired a thorough knowledge both of the practical and theoretical sides of the science.

He investigated the phenomena of spiritualism, and convinced himself of their genuineness.

His son, later, the fourth earl, prepared for him minute reports of séances which Daniel Dunglas Home conducted with his aid in 1867–8.

The reports were privately printed as Experiences in Spiritualism with Mr. D. D. Home, with a lucid introduction by Dunraven, in 1869 and subsequently withdrawn.

Edwin Richard Wyndham-Quin [following in the footsteps of George Petrie] unquestioningly accepted that the Round Towers of Ireland were ecclesiastical belfries.

But Irish archæology mainly occupied him.

He is said to have visited every barony in Ireland, and nearly every island off the coast.

He was usually attended by a photographer, and Dr. William Stokes and Miss Margaret Stokes were often in his company.

After Petrie’s death in 1866, Dunraven took it upon himself to complete his book, Notes on Irish Architecture.

He spent four years traveling and working on Notes, two lengthy folios published after his death, under the editorship of Margaret Stokes, with a preface by the fourth Earl of Dunraven, and notes by Petrie and Reeves.

The work was illustrated by 161 wood engravings, from drawings by G. Petrie, W. F. Wakeman, Gordon Hills, Margaret Stokes, Lord Dunraven, and others, besides 125 fine plates.

The first part dealt with stone buildings with and without cement, and the second part with belfries and Irish Romanesque.

However, the very first Round Tower described in the Notes on Irish Architecture [Volume 2] clearly displays a lack of supporting evidence for the belfry hypothesis which is papered over with some very faulty logic i.e. the discovery of human remains does not “prove” a church once stood at any archaeological site.

This noble tower, commonly called the Steeple, stands half a mile north of the town of Antrim, in the centre of the parish of that name, in the barony of Upper Toome, and county of Antrim.

There are two doorways and seven windows in the tower.

It is very rudely built, chiefly of basalt or trap, the rock of the country, the joints are wide, and the interstices are filled with small spawls and yellowish mortar.

The walling is of rude rubble masonry, the lower stones are apparently field stones, the upper appear to have been quarried, and are of common size.

The cut stone used in the original conical cap and in the present door is pitchstone porphyry.

Two fissures occur above the height of the door in the walls of the tower, owing apparently to the imperfect bonding of the stones. 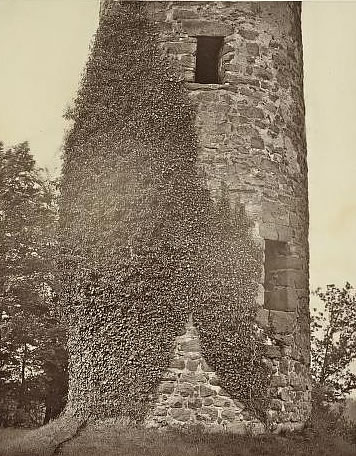 There is an artificial mound round the base of this tower, which is about 3 ft. high, and upon it the first plinth course is just visible.

I dug, and found a second course, lying against which were human bones, apparently in their original position.

The second plinth is about 1 ft. 6 in. below the first, and then there are projecting stones which probably formed the foundation.

A portion of the original stone which crowned the conical top is still preserved.

There is a square hole in the centre, into which a small wedge-shaped stone fitted, probably a cross.

The apertures are all square-headed ; even the stones in them are not rounded.

The jambs incline an inch and a half.

They are 2 ft. 11 in. thick, a beam of oak is placed between the inner and outer lintel across the door; this doorway is constructed of large blocks of coarse-grained basalt, found in the neighbourhood, many of the stones extending the entire thickness of the wall.

The jambs are of better stones than are found in the other apertures.

The lintel of the door is rounded.

Immediately over the lintel there is a large stone, on which is sculptured in rilievo a pierced cross within a circle.

The height of this aperture from the plinth course is 7 ft. 6 in.

When viewed from the interior, it would appear that it was an insertion.

It does not fit into the wall on each side, and the masonry looks different above the lintel.

There is a recess which may have been meant to hold the heavy frame of a wooden door.

Certainly there are no exterior marks of its being an insertion.

There is a second doorway about 14 ft. higher, which is quite as rude as the apertures above.

The cill of this doorway projects rude, broad, and ugly, with jambs nearly vertical.

The upper windows are narrower, and their sides incline rather more than those of the lower.

On the south side there is a window half-way to the top of the tower, and on the west side there is one two-thirds of the way up.

This must have lighted the third storey above the door.

Then another south window lights the fourth storey.

Above this there are the four windows near the roof, facing the four cardinal points.

This is the only tower I have ever seen without any remains of a church in its neighbourhood.

On this circumstance Dr. Reeves remarks :

” This monument of antiquity, to a stranger would appear, from the smoothness of the sward that surrounds it, and the total absence of any kindred building, to have been a solitary erection ; but the testimony of those who removed the foundations of adjacent walls, and who cleared away vast quantities of human remains from the surrounding space, and especially of the mason, who about twenty years ago repaired the top of the tower, and built into it a sculptured architrave of freestone which he found among the ruins, goes to prove that this tower, like all its fellows, has had in its day a church beside it.”

Overall, according to Notes on Irish Architecture the Round Tower of Antrim:

1) Is not overtly ecclesiastical because there are no “remains of a church in its neighbourhood” and there is a “total absence of any kindred building”.

2) Has a second plinth course containing “human bones, apparently in their original position”.

3) Was surrounded by “vast quantities of human remains”.

Therefore, the evidence from the Round Tower of Antrim suggests its original purpose was similar to that of a Buddhist stupa i.e. honouring the dead.

A stupa (Sanskrit: m.,stūpa “heap”) is a mound-like or hemispherical structure containing relics (śarīra – typically the remains of Buddhist monks or nuns), and used as a place of meditation. 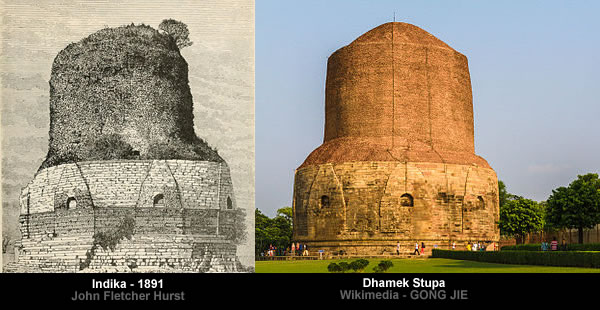 From these origins it can be argued that [over the centuries] the Round Towers of Ireland developed into [sacred] burial sites which were subsequently appropriated by other religious orders which [frequently] built their places of worship in close proximity to the Round Towers.

This evolutionary process is probably best demonstrated in France where the Round Towers have either been incorporated into churches or become lanternes des morts in graveyards.

Lanterns of the Dead (French: Lanternes des morts) are small stone towers found chiefly in the centre and west of France, pierced with small openings at the top, where a light was exhibited at night to indicate the position of a cemetery. 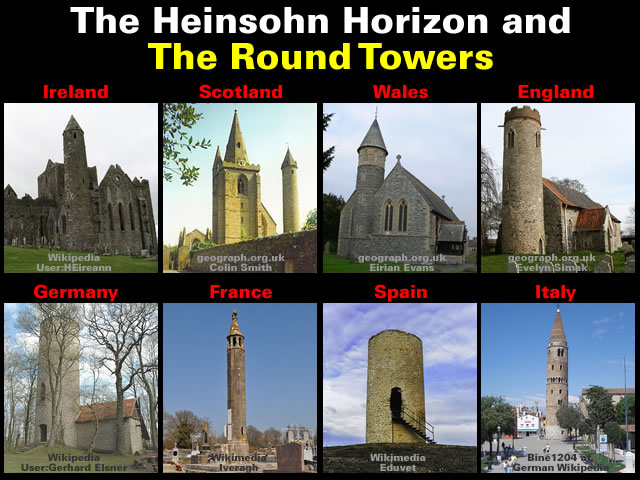 The curious interpretation of history continues in the Notes on Irish Architecture when the authors [Petrie/Wyndham-Quin/Stokes] detail the historical events associated with the Round Tower of Antrim.

Antrim, originally named Oentreb, i.e. “One house,” was connected at an early period with the church of Bangor, in the county of Down.

St. Comgall, who founded Bangor in the year 552, is represented as predicting, ” It will be true, by permission of the King of kings, that my bones shall be removed without defect from beloved Bennchor to Entrobh,” and in the Annals of the Four Masters, at the date 822, we read of the fulfilment of this prophecy : when the Oratory of Bangor was destroyed by the Danes, ” the reliques of Comgall were shaken from the shrine in which they were,” and brought to Entrobh.

In St. Bernard’s Life of St. Malachy O’Morgair, of Bangor, mention is made of his visiting a certain rich man, who sent for his aid in sickness, ” in civitate cui nomen Oentreb.”

The name subsequently assumed the forms of Entroia, Antroye, Entroya, but when it became Antrim, which more fittingly represents Aondruim (now Nendrum of Strangford), it wandered very far from etymological correctness.

The name Oentreib occurs also in the Annotations on the Felire of Aengus, at July 31.

At the dates 877 and 1096, we read of the death of two ecclesiastics belonging to this church, Muredach, son of Cormac, and Fland Ua Muirechan,.

At the dissolution of religious houses, the rectory was found to be appropriated to the Abbey of Woodburn, near Carrickfergus.

The quotation “the reliques of Comgall were shaken from the shrine” appears to suggests an earthquake [or severe thunderstorm] rather than the preferred mainstream narrative of “destroyed by the Danes”.

Furthermore, when it comes to the “invasions of the Northmen” the Notes on Irish Architecture [in its closing pages] suddenly switches from the belfry narrative to the protection narrative for the Round Towers of Ireland.

N.B. As these round towers are first mentioned in the Annals of Ireland in the tenth century it would seem that they were created for the protection of the Churches in consequence of the first attacks made upon the churches in the ninth century.

However, its hard to imagine that anyone [in their right mind] would seek to protect themselves [or their valuables] in a highly prominent Round Tower which visibly advertises its presence to all and sundry – including marauding invaders who are determined to pillage and plunder.

Danes and Druids, Persian or Scythian fire-worshippers, African sea-kings, Phoenicians and Indians, all went out of the door and the towers were firmly established as ecclesiastical in origin, monastic structures of the early Celtic church, primarily bell towers, refuges and treasure stores, with secondary uses as watch towers and possibly beacons.

On the plus side, the Notes on Irish Architecture does include many useful descriptions, intriguing illustrations and striking photographs which further underline the impression that the mainstream historical narrative is very corrupt and very misleading. 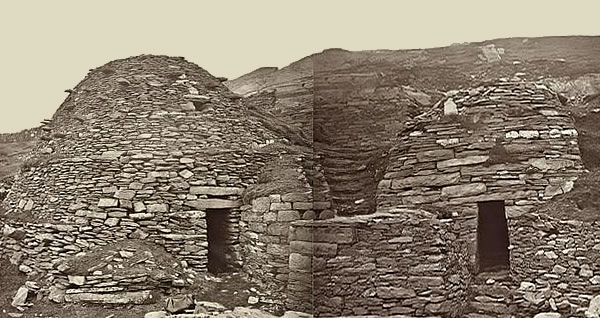 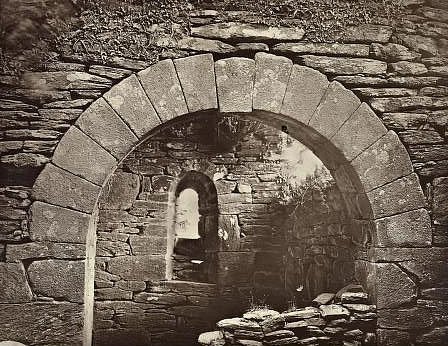 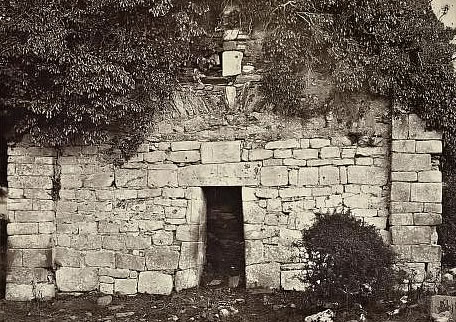 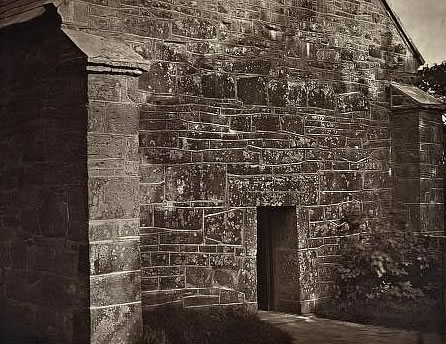 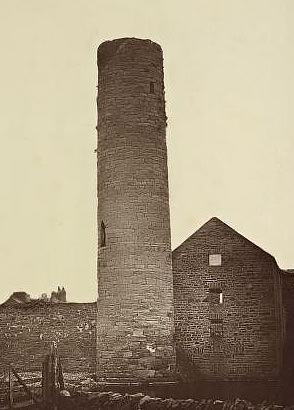 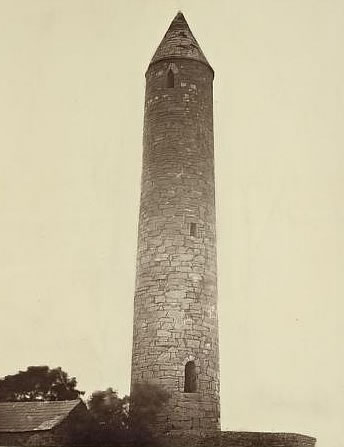 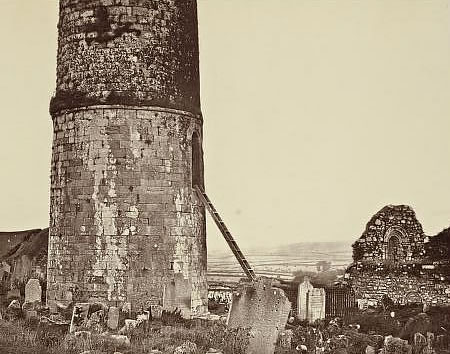 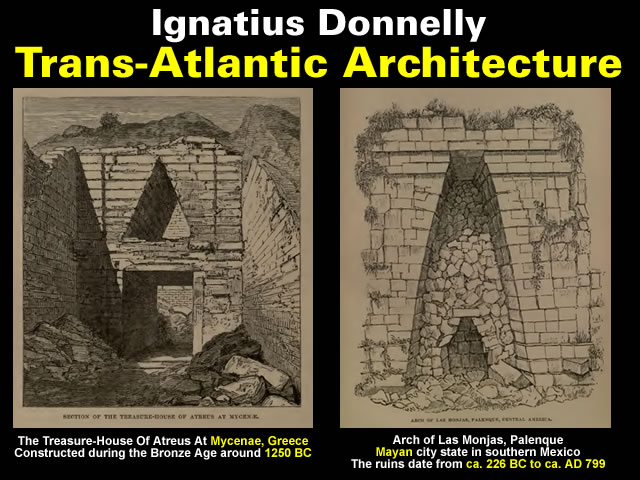 Gallery | This entry was posted in Books, Heinsohn Horizon, History, Round Towers. Bookmark the permalink.