The Roman Conquest of Britain was all about precious metals.

Mining was one of the most prosperous activities in Roman Britain.

Britain was rich in resources such as copper, gold, iron, lead, salt, silver, and tin, materials in high demand in the Roman Empire.

The abundance of mineral resources in the British Isles was probably one of the reasons for the Roman conquest of Britain.

They were able to use advanced technology to find, develop and extract valuable minerals on a scale unequaled until the Middle ages.

One of the more tangible benefits that accrued to Rome from the conquest of an empire was the acquisition of significant mineral resources, significant because Italy, although rich in iron, could not provide a sufficient supply of the whole range of metals needed by the Roman state for coinage and by member of the elite for the luxury artefacts that helped to enhance their social status.

Once Rome had gained control over metalliferous regions of the Mediterranean, Romans, and especially Italians, were not slow to become involved in mining overseas, while the state came to gain considerable revenue from the leasing of contracts for the right to exploit state-owned mineral resources.

The initial focus of the Roman Conquest of Britain was lead.

Analysis of deposits from Lindlow Bog near Manchester shows a continuous record of
over a period of 4000 years.

There is a dramatic increase in lead pollution from 200 B.C. to 200 A.D., indicating that lead production was considerable before the Roman occupation of Britain.

In Britannia the largest sources were at Mendip, South West England and especially at Charterhouse.

In A.D. 49, six years after the invasion and conquest of Britain, the Romans had the lead mines of Mendip and those of Derbyshire, Shropshire, Yorkshire and Wales running at full shift.

By A.D.70, Britain had surpassed Hispania as the leading lead-producing province.

The Spanish soon lodged a complaint with the Emperor Vespasian, who in turn put limits on the amount of lead being produced in Britain.

However British lead production continued to increase and ingots (or pigs) of lead have been found datable to the late second – early third century.

Research in America has found that British lead (i.e. Somerset lead) was used in Pompeii – the town destroyed in the eruption of Vesuvius in A.D.79.

Lead mining was an essential activity because it provided Rome with silver.

The most important use of lead was the extraction of silver.

Lead and silver were often found together in the galena, the lead ore.

The Roman economy was based on silver, as the majority of higher value coins were minted from the precious metal.

Lead was also an essential material in the Roman Empire.

Lead has been commonly used for thousands of years because it is widespread, easy to extract, and easy to work with. It is highly malleable and easily smeltable.
…
With the development of mining and its territorial expansion in Europe and across the Mediterranean, Rome became the greatest producer of lead during the classical era, with an estimated annual output equaling 80,000 tonnes. 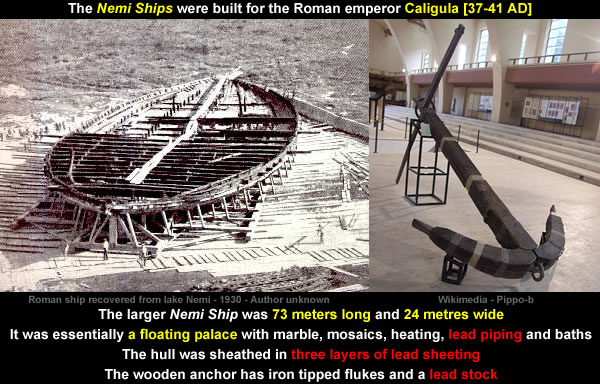 Roman naval cataphract warships were protected on their sides by a layer of tarred and lead sheathing.

It was used for piping for aqueducts and plumbing, pewter, coffins, and gutters for villas, as well as a source of the silver that sometimes occurred in the same mineral deposits.

Fifty-two sheets of Mendip lead still line the great bath at Bath which is a few miles from Charterhouse.

The Romans used lead cooking pots, which may have proved poisonous, particularly when boiling wine to concentrate it.
…
Before sugar became available Lead Acetate was used to sweeten wines, sometimes with deadly effect.

In Roman times lead oxides were used as paints.

For the Roman Empire lead was dangerous in the long term.

Lead poisoning – a condition in which one becomes dark and cynical – was called “saturnine”, after the ghoulish god of Saturn; the metal was also considered the father of all metals.

Lead poisoning can cause a variety of symptoms and signs which vary depending on the individual and the duration of lead exposure.
…
Symptoms usually develop over weeks to months as lead builds up in the body during a chronic exposure, but acute symptoms from brief, intense exposures also occur.

Symptoms from exposure to organic lead, which is probably more toxic than inorganic lead due to its lipid solubility, occur rapidly.

Poisoning by organic lead compounds has symptoms predominantly in the central nervous system, such as insomnia, delirium, cognitive deficits, tremor, hallucinations, and convulsions.

Gout, prevalent in affluent Rome, is thought to be the result of lead, or leaded eating and drinking vessels.

Sugar of lead (lead(II) acetate) was used to sweeten wine, and the gout that resulted from this was known as “saturnine” gout.

It is even hypothesized that lead poisoning may have contributed to the decline of the Roman Empire, a hypothesis thoroughly disputed…

Marcus Vitruvius Pollio (born c. 80–70 BC, died after c. 15 BC)… is well known and often cited as one of the earliest surviving sources to have advised that lead should not be used to conduct drinking water, recommending clay pipes or masonry channels.

For the British the Roman Empire was an immediate danger.

The Dolaucothi Gold Mines, also known as the Ogofau Gold Mine, are Roman surface and underground mines located in the valley of the River Cothi, near Pumsaint, Carmarthenshire, Wales.
…
Sextus Julius Frontinus was sent into Roman Britain in 74 AD to succeed Quintus Petillius Cerialis as governor of that island.

He subdued the Silures, Demetae and other hostile tribes of Roman Wales, establishing a new base at Caerleon for Legio II Augusta and a network of smaller Roman forts fifteen to twenty kilometres apart for his Roman auxiliary units.
…
The Romans may have used slave labour taken from the local area to work the mine, although the army itself was probably most directly involved, especially for their engineering skills in surveying and building aqueducts, reservoirs and water tanks or cisterns.

Luentinum appears to have been founded as a square 5½ acre (2.25 hectare) Roman auxiliary fort controlling the adjoining gold mines, around AD 75 when Frontinus was governor of Roman Britain and active in subduing the Silures of Roman Wales.

Because of the value of the metal produced, mines were usually put under the control of the army.

In Britain the evidence is that the Roman legions not only had the responsibility for mines, but also for the smelting of lead.

And the Roman Empire arrived in Wroxeter [Shropshire – England] around 58 AD.

The relocated Viroconium was established about AD 58 as a fortified camp (castra) for the Legio XIV Gemina during their invasion of Wales.

The main section of the Watling Street Roman road runs across England between Dubris (Roman Dover) and Wroxeter.

The arrival of the Roman Empire in Wroxeter wasn’t a total surprise because of Shropshire lead.

Snailbeach is a village in Shropshire, England, located near Shrewsbury
…
A village was built for workers at the local lead mine – Snailbeach Mine, which reputedly dates back to Roman times.
…
Snailbeach Mine was the biggest lead mine in Shropshire and it is reputed to have yielded the greatest volume of lead per acre of any mine in Europe.

Although the miners mainly extracted lead ore (galena) from the mine, smaller quantities of Barytes, Calcite, Fluorspar, Silver and Zinc were also obtained.

The Stiperstones is a distinctive hill in the county of Shropshire, England.
…
The general area has a long history of lead mining, most notably during the Roman occupation of Britain.

Several pigs of lead have been found nearby, and the tradition continued into Victorian times.

But the abandonment of Wroxeter by the Roman Empire in 88 AD was very surprising because the Snailbeach lead mine was still operational.

Around the year 88, the military abandoned the fortress and it was taken over by the Cornovians’ civilian settlement.

Proof that the Romans mined lead at Snailbeach was found in 1796, when a Roman lead ingot weighing 87.5 kilogrammes (over 13 ½ stone – the weight of a large man) was found there, bearing the inscription IMP HADRIANI AVG.

Alternatively, the mainstream historical narrative may have experienced a communication breakdown with reality and the Roman Empire…

1 Response to The Wroxeter Chronicles: Legions, Lead and Lunacy