Myths of the Cherokee: Struck by Lightning 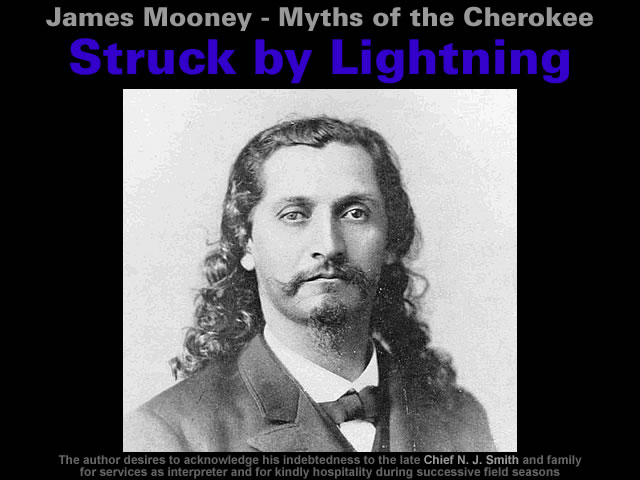 James Mooney noted the Cherokee utilise the “mysterious properties” of wood that has been struck by lightning.

Following this line of inquiry reveals some very surprising information.

These “mysterious properties” were employed by the Cherokee to prepare seeds for “a good crop”.

Mysterious properties attach to the wood of a tree which has been struck by lightning, especially when the tree itself still lives, and such wood enters largely into the secret compounds of the conjurers.

An ordinary person of the laity will not touch it, for fear of having cracks come upon his hands and feet, nor is it burned for fuel, for fear that lye made from the ashes will cause consumption.

In preparing ballplayers for the contest, the medicine-man sometimes burns splinters of it to coal, which he gives to the players to paint themselves with in order that they may be able to strike their opponents with all the force of a thunderbolt.

Bark or wood from a tree struck by lightning, but still green, is beaten up and put into the water in which seeds are soaked before planting, to insure a good crop, but, on the other hand, any lightning-struck wood thrown into the field will cause the crop to wither, and it is believed to have a bad effect even to go into the field immediately after having been near such a tree.

With the American tribes, as in Europe, a mysterious potency attaches to the wood of a tree which has been struck by lightning.

The Cherokee conjurers claim to do wonderful things by means of such wood.

Splinters of it are frequently buried in the field to make the corn grow.

After many years of testing at University of Florida and the USDA lab at Gainesville, Prof Callahan has proven that any soil that is healthy (primary, secondary & trace minerals, with good biology) will grow healthy plants, but when paramagnetic rock dust is added to that soil, the growth of the plant increases from 200% to 875%, while the use of water (irrigation) is reduced by nearly 40%.

Terra preta (literally “black soil” in Portuguese) is a type of very dark, fertile manmade (anthropogenic) soil found in the Amazon Basin.
…
Terra preta owes its characteristic black color to its weathered charcoal content, and was made by adding a mixture of charcoal, bone, and manure to the otherwise relatively infertile Amazonian soil.

A product of indigenous soil management and slash-and-char agriculture, the charcoal is very stable and remains in the soil for thousands of years, binding and retaining minerals and nutrients.

However, this line of inquiry became even more curious when I stumbled across a remarkable paper by Marie-Agnès Courty that examines a “lightning struck pine tree” and the “materials formed by transient heating and plasma processes”.

Their durability expresses the refractory and hydrophobic properties of materials formed by transient heating and plasma processes.

The identiﬁcation of similar robust components in all the ﬁring products of the archaeological contexts tested here shows that plasma-assisted combustion and ﬂash heating exert a major role on the durability of ﬁring records.

The archaeological combustion contexts are separated into two types of intact ﬁring records:

(1) the ones with abundant mineralised charcoal, vitreous char and metal coatings would trace the use of fuel acquired from wood affected by a lightning strike;

(2) the thick white ash with polymer ﬁlms, refractory minerals and metal coatings would indicate wood fuel collected during periods of active aeroplasma processes in the atmosphere due to increased dust loading and intense ionization.

The study is suggested to offer a challenging perspective to elucidate further the role that lightning and plasma processes exerted on ancestral pyrotechnology by occasionally providing wood fuel resources of long durability, low degradability and high caloriﬁc power.

This remarkable paper details a “lightning struck pine tree” that has limited surface vitrification and this field observation provides direct support for Louis Hissink’s hypothesis that “the surface vitrification observed coating many rock outcrops” could be produced by [large scale] “electric plasma explosions”.

One of the more mysterious geological occurrences is the surface vitrification observed coating may rock outcrops.

In the Kimberley region of Western Australia ancient rock paintings known as the Bradshaw Paintings are covered by a thin silicious coating that has permanently fused the painted art onto the rock surface, making this art particularly fire-resistant.

The puzzle lies in the origin of this vitrification. What is it?

Basically it seems to be similar to the thermal effects of a nuclear explosion where a sudden flash of extremely high temperature causes partial melting of the surface of rocks and stone structures that then cooled rapidly and left a glassy or vitrified coating. It is similar to some methods of glazing used in the production of baked clay utensils and bricks etc.

Nuclear explosions are electric plasma explosions, to put it simply, and yield a flash of intense heat and radiation.

In a variety of contexts, exogeny or exogeneity (from Greek exo, meaning “outside”, and gignomai, meaning “to produce”) is the fact of an action or object originating externally.
…
In materials science, an exogenous property of a substance is derived from outside or external influences, such as a nano-doped material. 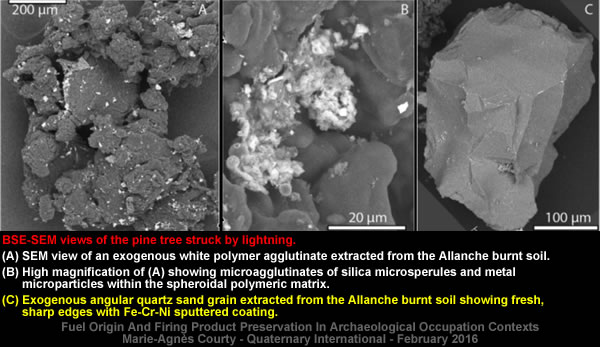 And if this proposed plasma pulse did actually happen in the past, might it also have produced the globally extensive silicate sands from the electro-machining of the Earth’s surface as implied by the Australian aboriginal rainbow serpent stories?

But if this regolith stripping was caused by the Rainbow Serpent Mechanism (RSM), then logically the old land surface would have covered a deeply weathered regolith of clay and minor quartz which when subsequently subject to the impact of a large electric-plasma cutting mechanism would, under the extreme temperatures and Z-Pinch pressures cause partial melting of the clays and formation of droplets of glass or quartz.

Western Australia does have radioactive siliceous surface deposits known as ‘grey-billy’ or ‘laterites’, the iron rich variation which are also frequently radioactive.

Laterite is a soil and rock type rich in iron and aluminium, and is commonly considered to have formed in hot and wet tropical areas.

Nearly all laterites are of rusty-red coloration, because of high iron oxide content.

Laterites are a source of aluminium ore; the ore exists largely in clay minerals and the hydroxides, gibbsite, boehmite, and diaspore, which resembles the composition of bauxite. In Northern Ireland they once provided a major source of iron and aluminium ores.

Laterite ores also were the early major source of nickel.
…
Laterites consist mainly of quartz, zircon, and oxides of titanium, iron, tin, aluminium and manganese, which remain during the course of weathering.
…
Yves Tardy, from the French Institut National Polytechnique de Toulouse and the Centre National de la Recherche Scientifique, calculated that laterites cover about one-third of the Earth’s continental land area.

As Louis Hissink says: “All rather unsettling in a scientific sense, no?”