One of the more spectacular reactions to the Settled Science of Global Warming has been a resurgence of interest in Science [especially Earth Sciences] and with the emergence of Crowd Source Funding a new generation of independent Scientists [unfettered by the straitjacket of Academic Groupthink] are beginning to make waves.

The independent Scientist Dutchsinse is currently refining his earthquake prediction capabilities following the development of a Seismic Progression Map.

After 7 years of research, and countless hours of live broadcasting seismic events out to the world, a Global Seismic Pressure Transfer Map (GSPT) has now been officially developed for public use.
…
This map is based upon our observed progression of seismic events (earthquakes both deep and shallow) which occur daily, weekly, and monthly around the planet.

The seismic pressure transfer has been observed to create earthquakes of similar size which spread out beginning in the West Pacific.

The whole process of seismic progression begins from the West Pacific, born from multiple “deep” earthquakes (beyond 300 miles / 400+ km depth) which usually strike below the areas marked with the letter “D” on the map.

The earthquake forecasts made by Dutchsinse are gaining traction and he has notched up some impressive results regarding earthquake locations and strength within a predicted window of opportunity that is limited to 72 hours for a specific seismic event in the chain.

Many of the earthquake sites appears to be related to magmatic dykess, dormant volcanoes, sea mounts and man made areas of crustal weakness such as fracking sites, oil wells and deep mines.

Dutchsinse notes that volcanic eruptions are frequently associated with these seismic event chains and that eruptions diminish subsequent seismic events along the chain.

The observed inter-connections leads Dutchsinse to suggest the Earth has a plasma core that thermally drives deep earthquakes which trigger seismic event chains that are propagated around the globe in the asthenosphere.

The asthenosphere is the highly viscous, mechanically weak and ductilely deforming region of the upper mantle of the Earth.

It lies below the lithosphere, at depths between approximately 80 and 200 km (50 and 120 miles) below the surface.

The asthenosphere is generally solid, although some of its regions could be melted (e.g., below mid-ocean ridges).

The lower boundary of the asthenosphere is not well defined.

The thickness of the asthenosphere depends mainly on the temperature.

In some regions the asthenosphere could extend as deep as 700 km (430 mi).

It is considered the source region of mid-ocean ridge basalt (MORB).

Earthquake observations suggest seismic event chains propagate along the edges of the cratons, linearly beneath the oceanic crust and [occasionally] beneath the craton.

A craton is an old and stable part of the continental lithosphere, where the lithosphere consists of the Earth’s two topmost layers, the crust and the uppermost mantle.

Having often survived cycles of merging and rifting of continents, cratons are generally found in the interiors of tectonic plates.

They are characteristically composed of ancient crystalline basement rock, which may be covered by younger sedimentary rock.

They have a thick crust and deep lithospheric roots that extend as much as several hundred kilometres into the Earth’s mantle.

Arguably, the predicted window of opportunity [for a specific seismic event] will be refined further as the dynamics of the propagation paths become better understood.

However, it’s certain is that the arguments over Plate Tectonics will rumble on.

Plate tectonics is a scientific theory describing the large-scale motion of 7 large plates and the movements of a larger number of smaller plates of the Earth’s lithosphere, over the last hundreds of millions of years.

The theoretical model builds on the concept of continental drift developed during the first few decades of the 20th century.

The geoscientific community accepted plate-tectonic theory after seafloor spreading was validated in the late 1950s and early 1960s.

One of the bigger problems for Plate Tectonics is that deep earthquakes [below 500 km] are exceedingly difficult for the mainstream to explain away because [at that depth] the asthenosphere is meant to highly viscous, mechanically weak and ductilely deforming.

The third hint that there may be a problem with the Earth Scientists ability to transform their 99.81% ignorance of the Earth’s interior into Settled Science arrived when it was realised that earthquakes occur in the “highly viscous, mechanically weak and ductilely deforming” asthenosphere and that the occurrence of earthquakes increases after a depth of 400 kilometres [where there Earth is meant to be increasingly hot and increasingly viscous] until they disappear at a depth of around 700 kilometres.

The dynamics of deep earthquakes along [for example] the north eastern edge of the Australian Plate [where a “subduction zone” runs parallel to an “oceanic spreading ridge”] can be interpreted in many ways.

The earthquakes in this region appear to occur along the plane of the “subducting plate”.

These earthquakes can be interpreted to support Plate Tectonics by suggesting earthquakes are caused by the “subducting plate” being driven down into the Earth.

Subduction is a geological process that takes place at convergent boundaries of tectonic plates where one plate moves under another and is forced or sinks due to gravity into the mantle.

Regions where this process occurs are known as subduction zones.

Plates include both oceanic crust and continental crust.

Alternatively, this region can be interpreted [in support of Dutchsinse] as a mechanism driven by a hot spot beneath the “oceanic spreading ridge”. 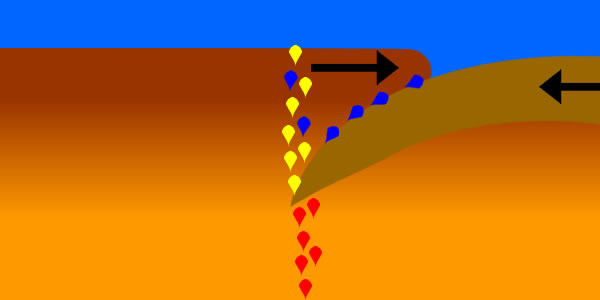 Personally, I favour a simpler mechanism powered by compression heating.

This mechanism assumes surface “plates” simply slide over a viscous asthenosphere and will eventually become “fused” together when the “plates” arrive at an equilibrium position i.e. when there is no sliding and [by definition] no compression heating.

The Indian Plate or India Plate is a major tectonic plate straddling the equator in the eastern hemisphere.

Originally a part of the ancient continent of Gondwana, India broke away from the other fragments of Gondwana 100 million years ago and began moving north.

Once fused with the adjacent Australia to form a single Indo-Australian Plate, recent studies suggest that India and Australia have been separate plates for at least 3 million years and likely longer.

This slow sliding on a viscous asthenosphere is illustrated by the “Indian Plate”.

The gradual sliding and rotation of the symmetrical shield shaped “Indian Plate” suggests it’s [slowly but surely] aligning itself with the Earth’s axis of spin.

However, it should be noted that rapid “plate” sliding would be accompanied by additional “friction heating” beneath the “plate” and that this might explain the Deccan Traps.

The Deccan Traps are a large igneous province located on the Deccan Plateau of west-central India (17°–24°N, 73°–74°E) and one of the largest volcanic features on Earth. 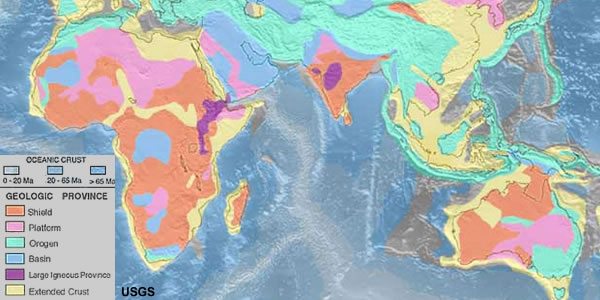 The Deccan Traps shown as dark purple spot on the geologic map of India.

Which, of course, implies the Geological Timescale is incorrect and that the axial tilt of the Earth was previously greater than its current 23.4°.

Either way, the Science isn’t settled and the following video by Dutchsinse provides plenty of food for thought – including [at 53:38] a 5.3 earthquake on the West coast of Scotland [reported by 14 stations] that wasn’t included in the official listing.