Deranged Dating: 536 And All That 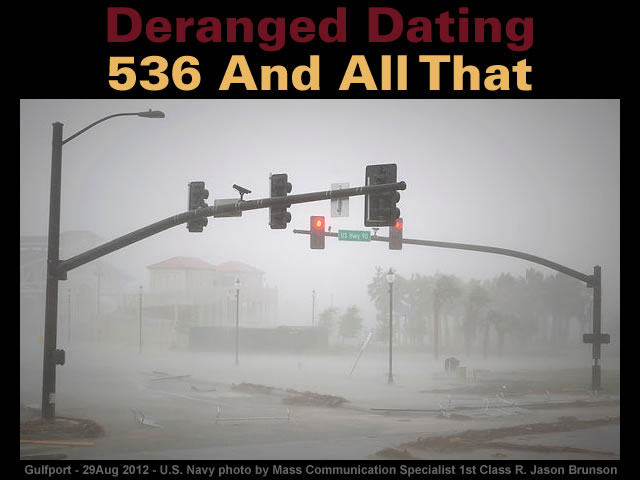 Best snap on a pair of rubber gloves because this is going to be a messy delve into an Anarchic Academic Admixture of Settled Science Spaghetti and Historic Hubris that’s liberally coated with Consensus Calibration Coulis.

This Anarchic Academic Admixture is very much alive and in a seething state of continuous change as it wriggles towards an illusive Consensus.

I don’t personally understand the reason why calibration has been re-calibrated recently (back in 2013) as it must cause a lot of confusion when dating archaeological material.

For example, the 2300BC scenario is now dated to around 2500BC, opening up a massive gap in archaeology.
…
What is worse, if you have a few books on the shelves that are written in the old dates – they are now invalid.

Not just books, but articles as well.…

But it’s a great job creation scheme as all those old books and articles are conscientiously consigned to the memory hole so they can be replaced with copious quantities of fresh Consensus Compliant Chaff.

However, for independent observers, it’s becoming increasingly difficult to differentiate this process of continuous change from a Settled Science Stampede that’s locked into a feedback loop that’s going round in circles [and getting nowhere meaningful].

Positive feedback is a process that occurs in a feedback loop in which the effects of a small disturbance on a system include an increase in the magnitude of the perturbation.

The Physics of the Oozlum Bird is intriguing because it has the ability to fly around in ever-decreasing circles until it disappears [with an almighty big bang] into a black hole.

Taking a closer look at one of these carefully crafted globs of Consensus Compliant Chaff may help illustrate the point.

The Late Antique Little Ice Age was a long-lasting Northern hemisphere cooling period in the 6th and 7th century AD, proposed as theory in 2015, and subsequently confirmed as the interval from 536 to about 660 AD.

One of the supporting strands of Settled Science Spaghetti embedded within this glob of Consensus Compliant Chaff focusses upon the “extreme weather events of 535–536”.

This period followed three immense volcanic eruptions in 536, 540 and 547.
One of the suspected volcanic sites for those events is the Rabaul caldera, in the western Pacific, which erupted around 540.

The extreme weather events of 535–536 were the early phenomena of the century-long global temperature decline.

The first hunk of Historic Hubris is centred upon my old friend Procopius who is [unfortunately] one of the best Western mainstream sources with the least convincing provenance.

The Byzantine historian Procopius recorded of 536, in his report on the wars with the Vandals, “during this year a most dread portent took place. For the sun gave forth its light without brightness… and it seemed exceedingly like the sun in eclipse, for the beams it shed were not clear”.

Furthermore, Procopius of Caesarea [“the last major historian of the ancient Western world”] is one of the best Western mainstream sources with the least convincing provenance and [ironically] “the worst” content.

For example, his “celebrated (and infamous) Secret History” was lost for over a thousand years before it was [apparently] “discovered” in the Vatican Library and published in 1623.

The second hunk of Historic Hubris comes from the Emerald Isle.

Unfortunately, these sources are also rather dubious.

The Annals of Ulster was compiled [at least] 900 years after the events of 536 AD.

The Annals of Ulster are annals of medieval Ireland.

The entries up to AD 1489 were compiled in the late 15th century by the scribe Ruaidhrí Ó Luinín, under his patron Cathal Óg Mac Maghnusa on the island of Belle Isle on Lough Erne in the province of Ulster.

Cathal Óg Mac Maghnusa (1439-1498) was an Irish historian. He was the principal compiler of the Annals of Ulster, along with the scribe Ruaidhrí Ó Luinín.

The provenance of the Annals of Inisfallen includes lots of arm waving and wishful thinking which fails to obscure the uncomfortable truth that the manuscript can only be traced back to a vague “some time” before the end of the first quarter of the seventeenth century.

The Annals of Inisfallen are a chronicle of the medieval history of Ireland.

The manuscript is thought to have been compiled in 1092, as the chronicle is written by a single scribe down to that point but updated by many different hands thereafter.

The MS was continued to the early fourteenth century by some 18 scribes (only six of whom made large contributions).

Mac Niocaill, however, suggests that while the earliest stratum may be associated with Emly, the annals may have been continued at Tomgraney, transcribed at Killaloe after the mid-eleventh century, and continued at Lismore from about the year 1119.

The MS passed to a West-Munster monastery, most likely Inisfallen, in 1130×1159.

The fact that much of the later part of these annals is in phonetic spellings lends them an additional linguistic interest.

The MS came into the possession of Sir James Ware (died 1666) some time before the end of the first quarter of the seventeenth century and is described in the catalogue of his books as ‘Annales coenobii Innisfallensis in agro Kerriano.

In 1638 he, with Sir Philip Perceval obtained the monopoly of granting licenses for the sale of ale and brandy.
…
His book of 1639, De Scriptoribus Hiberniae was to be the last published for fifteen years, due to his involvement in Irish and British politics.

Overall, it’s difficult avoiding the conclusion the above history was written by the victors.

During the 16th and 17th centuries, England not only conquered Ireland by military force, but under Oliver Cromwell (1649–53) and his forces killed tens of thousands of Irish, and drove hundreds of thousands more off their land in Northeastern Ireland (Ulster).
…
In Ireland Before and After the Famine, Cormac O’Grada points out, “Although the potato crop failed, the country was still producing and exporting more than enough grain crops to feed the population. But that was a “money crop” and not a “food crop” and could not be interfered with.”

Further phenomena were reported by a number of independent contemporary sources:

Low temperatures, even snow during the summer (snow reportedly fell in August in China during the Northern and Southern dynasties, which caused the harvest there to be delayed) [9]

Drought in Peru, which affected the Moche culture [9] [11]

The most quoted independent contemporary source is a Global Warming tome with strong NGO connections that suggests it’s neither independent nor a primary source of information for the “extreme weather events of 535–536”.

George Ochoa is a writer specializing in reference books on science and other subjects.

Currently discounted by 85% at https://www.amazon.com/dp/B001G7R6BM

Having discovered that the documentary evidence is far from overwhelming the independent observer is left to consider the scientific evidence.

Tree ring analysis by dendrochronologist Mike Baillie, of the Queen’s University of Belfast, shows abnormally little growth in Irish oak in 536 and another sharp drop in 542, after a partial recovery.

Similar patterns are recorded in tree rings from Sweden and Finland, in California’s Sierra Nevada and in rings from Chilean Fitzroya trees.

Ice cores from Greenland and Antarctica show evidence of substantial sulfate deposits in around 533–534 ± 2, which is evidence of an extensive acidic dust veil.

Unfortunately, this scientific evidence is also far from overwhelming.

The best the 1993 Irish Oaks Delta 14C Chronology can muster is an uncalibrated downward spike in 414 AD which is adjusted to 590 AD by the calibration process..

However, all is not lost for the “extreme weather events of 535–536” because there are other secret sauce recipes for the lubricating Consensus Calibration Coulis.

The calibration method also assumes that the temporal variation in 14C level is global, such that a small number of samples from a specific year are sufficient for calibration.

This was experimentally verified in the 1980s.

Over the next thirty years many calibration curves were published using a variety of methods and statistical approaches.

The improvements to these curves are based on new data gathered from tree rings, varves, coral, and other studies.

The IntCal13 recipe for the Consensus Calibration Coulis is almost the perfect secret sauce for validating the “extreme weather events of 535–536” and associated “extensive acidic dust veil” because an uncalibrated downward spike in 363 AD is adjusted to a more sympathetic 525 AD by the calibration process i.e. only 11 years short of 536 AD.

However, before you get too excited it should be noted this Consensus Calibration Coulis recipe has probably doubled up on some of it’s ingredients.

If this is the case then the scientific evidence for the “extreme weather events of 535–536” actually relates to 1145 CE.

Which, strangely enough, makes sense because 1145 CE coincides with a Comet Halley perihelion.

Hopefully, that wasn’t too messy.

7 Responses to Deranged Dating: 536 And All That