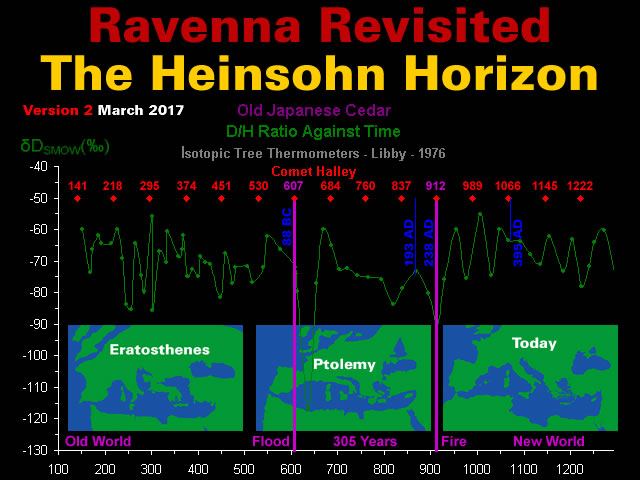 Based upon the mud that reached the height of the ground floor door lintel of the Mausoleum of Theoderic in Ravenna it seems this event was characterised by earthquakes and flooding.

The more likely explanation is that these tall tales from the monasteries were designed to explain away the natural disaster that was the Roman Termination Event in 912 CE – an event that most decidedly was associated with “heat, fire and dust”.

These topographical changes have been carefully recorded by many generations of cartographers and the initial [predominantly] East-West expansion of the Mediterranean Sea was well documented by Eratosthenes and Ptolemy.

This dynamic evolution was also well documented in the 2nd millennium.

Overall, these topographical change form a natural continuum that documents the transformation of the Old World into the New World.

One of the more dynamic locations [since the time of Ptolemy] has been the British Isle.

These changes to the British Isles are indirectly documented by the mainstream historical narrative.

The Romans introduced wine making to England, and even tried to grow grapes as far north as Lincolnshire.

Winemaking continued at least down to the time of the Normans with over 40 vineyards in England mentioned in the Domesday Book, although much of what was being produced was for making communion wine for the Eucharist.

The presence of amphora production houses found in what is now Brockley and Middlesex indicates that the British probably had vineyards of their own as well.

There is clear evidence that the Roman cult of Bacchus, the wine god, was practiced in Britain: more than 400 artifacts depicting his likeness have been found throughout Britain.

Dionysus is the god of the grape harvest, winemaking and wine, of ritual madness, fertility, theatre and religious ecstasy in ancient Greek religion and myth.
…
He is also known as Bacchus, the name adopted by the Romans and the frenzy he induces is bakkheia.

Nearly all the Greek historians mention that Dionysus, their wine God, came to India in remote times.

These changes have been interpreted by some observers as the Roman Warm Period followed by a period of “strong climate cooling” in the Early Middle Ages.

The Roman Warm Period or the Roman climatic optimum has been proposed as a period of unusually warm weather in Europe and the North Atlantic that ran from approximately 250 BC to AD 400.

Temperature can be inferred from the isotope ratios for carbon (carbon-12 and carbon-13C) and oxygen (oxygen-16 and oxygen-18) in the skeletons of sea foraminifers, in the bottom deposits in Sargasso Sea (Northern Atlantic).

These indicate that in the last 3,000 years, the climate on Earth has been constantly changing, and the scope of changes in modern times does not differ from those of the past.

Shown are the Medieval Optimum (1,000 years ago) the beginnings of the Holocenic Optimum (2,500 years ago), and also the Little Ice Age (ca. 500 years ago) from which we are still emerging.

The Early Middle Ages also witnessed a strong climate cooling, which had an impact on Europe ’ s economic and cultural decline in this period.

The Greeks had a more sophisticated approach towards climate change where a “change of clima” was associated with a change in latitude and/or a change in axial tilt.

Sadly, these Greek concepts are deemed heretical by modern Settled Scientists and far too complex to be comprehended by modern Earth Scientists.

The word clima (from Gr. κλίνειν, to lean or incline; whence also the English “clime,” now a poetical term for this or that region of the earth, regarded as characterized by climate), as used by the Greeks, probably referred originally either to the supposed slope of the earth towards the pole, or to the inclination of the earth’s axis.

It was an astronomical or a mathematical term, not associated with any idea of physical climate.

A change of clima then meant a change of latitude.

The latter was gradually seen to mean a change in atmospheric conditions as well as in length of day, and clima thus came to have its present meaning.

In many respects academia is still stuck in the Dark Ages.

The “Dark Ages” is a historical periodization traditionally referring to the Middle Ages.
…
The phrase “Dark Age” itself derives from the Latin saeculum obscurum, originally applied by Caesar Baronius in 1602 to a tumultuous period in the 10th and 11th centuries.