Back in the day, when the United Kingdom joined the Common Market, the media pumped out propaganda whilst avoiding detailed data and coherent comment like the plague.

In those distant days the Balance of Payments made headlines and the Government’s Foreign Exchange Controls meant gap year travellers [like myself] had to obtain special approval before they could purchase the necessary currency and Traveller’s Cheques.

The new currency controls are likely to bring back memories of the Sixties and Seventies when holidaymakers were only allowed to pack £50, the equivalent of £700 today.

The limits were brought in by Harold Wilson’s Labour government in 1964 in a doomed attempt to narrow a huge balance of payments deficit and revive the economy.

Travellers had their passports marked with the amount of foreign currency they had bought at the bank.

Back then, Economists introduced a new culinary delight to Britain: The European Waffle.

Economists baked-up ill-informed Cost Benefit Guesstimates where the Cost was defined as abandoning [vaguely] 50% of our established Trading arrangements with the Rest of the World for the unquantifiable Benefit of enhanced Trading opportunities with the European Common Market.

The United Kingdom European Communities referendum of 1975, also known as the Common Market referendum and EEC membership referendum was non-binding referendum held on 5 June 1975 in the United Kingdom to gauge support for the country’s continued membership of the European Communities (EC) – often known at the time as the “Common Market” – which it had entered on 1 January 1973 under the Conservative government of Edward Heath. Labour’s manifesto for the October 1974 general election had promised that the people would decide “through the ballot box” whether to remain in the EC.

The quality of information has only deteriorated since joining European Common Market.

This was amply demonstrated by the unedifying spectacle that was the Brexit Campaign where opposing groups of politicians and spin doctors cooked-up some good old-fashioned European Waffles for a new generation of junk food connoisseurs.

Since then the Government’s contribution to the debate hasn’t risen above the level of circulating a few Blue Pills containing empty platitudes and media sound bites.

Britain’s shock vote to leave the European Union in June propelled May to power and the former interior minister has been under pressure to offer more details on her plan for departure, beyond an often-repeated catchphrase that “Brexit means Brexit”.

BREXIT-BACKING MPs have condemned a Commons committee report because it criticised Theresa May’s claim that “no deal is better than a bad deal”.

Brexit report ROASTED after criticising May’s ‘no deal is better than a bad deal’ claim
The Express – Will Kirby – 4 Apr 2017
http://www.express.co.uk/news/uk/787563/brexit-committee-report-criticise-theresa-may-no-deal-better-than-bad-deal-dominic-raab

However, a few determined commentators on the internet have been producing substantive Red Pills containing well informed comment and unsettling information that indicates [for example] only 14% of Britain’s Trade is currently with the Rest of the World.

From what has been reported in the UK press on a daily basis, it doesn’t look like negotiations between the UK and Europe are going well.

To highlight the scale of the challenge that the UK faces, this chart shows the share of total UK trade by trade agreement.

According to Bruegel, approximately 51% of UK trade today is conducted with the EU, 4% with nations that are in the EEA or have a customs union agreement, and 9% under existing EU preferential trade agreements (PTA).

A further 21% of trade is conducted with nations that have a PTA under negotiation.

In March 2019, unless some form of deal is agreed, the UK will have to negotiate trade deals with the majority of its current trading partners.

This would be a major challenge as complex trade agreements are not easy to negotiate and often take years to agree to.

If the UK finds itself outside the European Union Single market and the EU Customs Union, tariff and non-tariff trade barriers (like quotas, embargoes, and levies) are likely to be implemented between the UK and its main European trading partners.

Some sectors and companies may face much more restricted access to the European market, and that will prove to be a significant headwind to UK economic growth in the short-term.

Here Are Some Of The Scariest Charts In Finance To Celebrate Halloween
BondVigilantes.com – Anthony Doyle – 31 Oct 2017
https://www.bondvigilantes.com/blog/2017/10/31/here-are-some-of-the-scariest-charts-in-finance-to-celebrate-halloween/

Confronted with the “no deal” advocates who airily assure us that, without a specific exit deal we can happily fall back on “WTO rules”, I have for a long time been concerned as to whether these so-called “rules” are quite the panacea that they are apparently held to be.

In fact, it seems to be the case that the “WTO rules” per se are not rules in any ordinary sense, in that they can be directly actioned or implemented in such a way as to bind the parties to any specific courses of action.

The key to this was expressed last Sunday by Booker in his column, where he stated that “WTO rules” were “not ‘rules’ at all but merely principles that must govern any trade agreement“.

It is difficult to find the exact point at which I started pointing out the problems that might arise after Brexit as a result of inadequate customs facilities on the other side of the Channel.

However, it is certainly the case that I was in full flow September 2016 – over a year ago. Then, I was writing that France “as we know” has limited infrastructure to deal with the extra customs requirements arising out of Brexit. And European officials, I said, “admit they are only just beginning to understand the scale of the Brexit challenge”.

In his pieces, headed, “The terrible Brexit prophecy of Ivan Rogers is coming true. We should have listened”, Booker tells us that, last week, one of the chief spectres at the Brexit feast was Sir Ivan Rogers, who last January resigned as our vastly experienced ambassador to the EU, after warning against “ill-founded arguments and muddled thinking” in our approach to leaving it.

This was just before Theresa May’s announcement that we were to leave the single market and the European Economic Area (EEA), to seek a one-off trade deal that would give us the same “frictionless” access to the market we have now.

On Wednesday, writes Booker, Sir Ivan tried to explain to the Commons Treasury committee some of the realities inevitably resulting from our decision to become what the EU classifies as a “third country”, with “no more rights than Yemen or Venezuela”.

And the picture he painted, although diplomatically couched, was devastating.

If you swallow the Blue Pills then everything is just fine and dandy and the British Government is being open, honest and truthful.

If you swallow all the Red Pills then triggering Article 50 [without a coherent and detailed plan] initiated a two year Thelma & Louise road trip towards oblivion.

Theresa May will call on the British people to unite as she triggers article 50, beginning a two-year process that will see the UK leave the European Union and sever a political relationship that has lasted 44 years.

A letter signed by the prime minister will be hand-delivered to the president of the European council at about 12.30pm – as she rises in Westminster to deliver a statement to MPs signalling the end of the UK’s most significant diplomatic association since the end of the second world war.

Article 50: Theresa May to call on UK to unite after letter triggers Brexit
The Guardian – Anushka Asthana and Rowena Mason – 29 March 2017
https://www.theguardian.com/politics/2017/mar/28/theresa-may-to-call-on-britons-to-unite-as-she-triggers-article-50

Slowly, but surely, people are beginning to sense something is wrong.

00:26
How did she not see this question coming?
Would you vote for Brexit if the referendum was held today?
I mean it’s a pretty obvious question to ask.
With, surely, only one possible answer if you’re the person in charge of Brexit.
Lie for fuck’s sake – but answer the fucking question.
It’s pretty simple Theresa: “I have changed my mind and I fundamentally believe that Brexit is a massive opportunity to…”
Fucking lie.
First day at politics school: “Can you look someone in the eye and lie?”
“Good. Right. You’re in.”
She can’t even do that.
Fucking useless.

The sweet and innocent song of the Lesser Westminster Warbler no longer soothes.

While song of the Abandoned Brussels Bureaucrat becomes more demanding and vengeful.

MEPs on Tuesday morning backed a motion by 557 votes to 92 that said negotiations should not be allowed to progress to the future relationship between the UK and the European Union unless there is a “major breakthrough.”
…
Barnier added that there was still “serious divergence” over the financial settlement, making it clear that taxpayers of the remaining 27 EU countries should not have to pay more to facilitate Brexit.

He said: “We will never accept for the 27 to pay what was decided on by 28, it’s as simple as that. The taxpayers of the 27 don’t have to pay for the consequences of the decision that they didn’t take. So, no more, no less.”

As Brexit dissolves into farce and fantasy there is a growing suspicion the set piece Negotiations by Press Conference are just badly choreographed Kabuki featuring the “three key objectives” as poor substitutes for the three tenors.

“The European Council must state that” sufficient progress “has not been achieved on the three key objectives of the EU – the protection of the rights of EU and British citizens, the clarification of Britain’s financial obligations and the resolution of the border issue in Ireland and Northern Ireland,” the press service said. European Council.

Kabuki is a classical Japanese dance-drama.

This impression is underlined by the classic Catch 22 nature of this Kabuki drama.

The EU won’t negotiate a Trade Deal until the “three key objectives” are resolved.

The UK can’t resolve the “three key objectives” until there’s a Trade Deal.

And it’s evident the Kabuki is in dire straits when the actors have to instruct the audience to stay seated until the Final Act begins on “the 59th minute of the 11th hour of the last day”.

Davis had told the Brexit select committee that he believed the EU would only finalise the deal at the last possible moment. “It’s no secret that the way the union makes its decisions tends to be at the 59th minute of the 11th hour of the last day.
That’s precisely what I would expect to happen here. I am quite sure in my mind that we can do that,” he said.

Thus we arrive at the position where Red Pill consumers suspect the British Government is playing another Great Game that involves Never Letting A Good Manufactured Crisis Go To Waste.

There is a possibility a last minute Manufactured Crisis could be used to bounce the British electorate into accepting an oven ready Transatlantic Trade and Investment Partnership [TTIP] with the USA.

The Transatlantic Trade and Investment Partnership (TTIP) is a proposed trade agreement between the European Union and the United States, with the aim of promoting trade and multilateral economic growth.
…
The negotiations were halted indefinitely following the 2016 United States presidential election, but by mid-2017, representatives of both the US and the EU expressed willingness to resume the negotiations.

There is also a possibility a last minute Manufactured Crisis could be used to bounce the British electorate into re-joining the EU on far less favourable terms e.g. no rebate, accepting the Euro with a European Treasury function, and full Military integration [PESCO].

A broad consensus by all EU Member States on the modalities for launching Permanent Structured Cooperation in the field of defence could lead to a legal decision as early as December, with some 30 projects for concrete cooperation between countries already on the table. 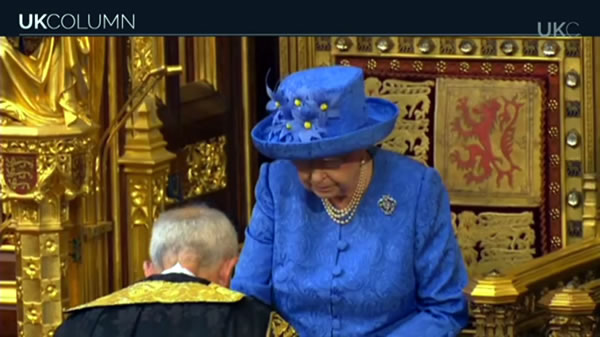 And finally there is the Crash and Burn option where the Oligarchs sell short and then fight with the Vulture Capitalists over the juiciest morsels of the charred remains.

One world, one money
A global currency is not a new idea, but it may soon get a new lease of life 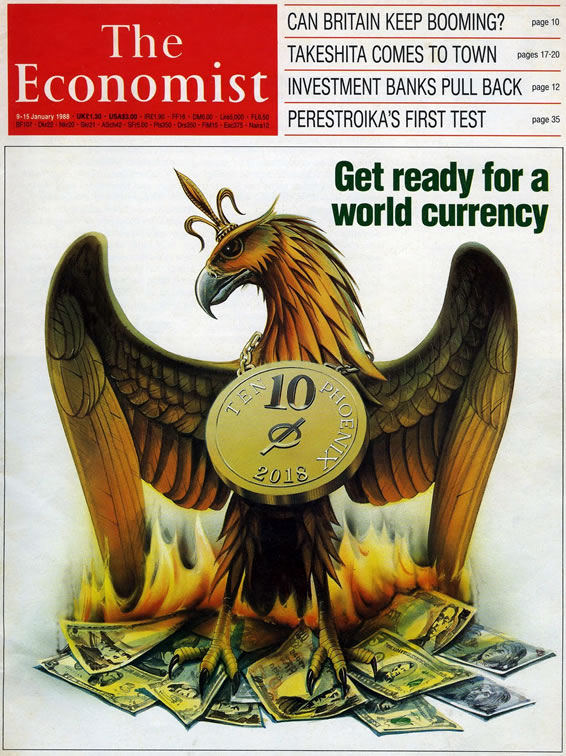 The British live in interesting times.

This entry was posted in Economics, History. Bookmark the permalink.

10 Responses to Brexit: The Great Game