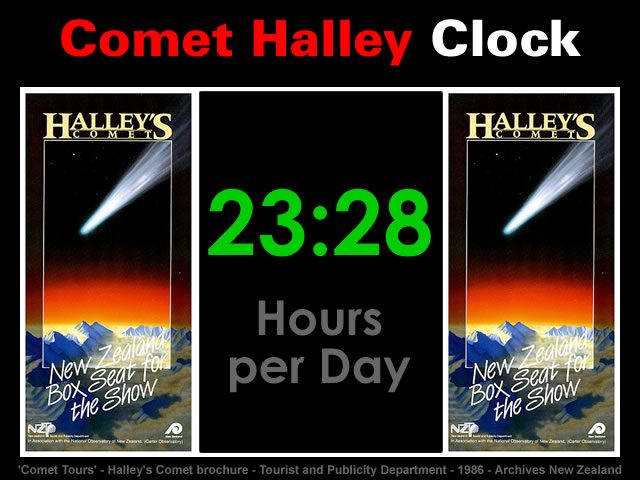 Life is full of surprises.

Having stumbled upon the Comet Halley Calendar [in the mire of mainstream medieval manuscripts and academic assertions] I wasn’t expecting any more revelations.

I was content with establishing a rough estimate for the number of days in a Earth Year when the Earth experienced it’s orbital excursion between 914 and 1409.

…
However, in whole numbers, an indicative estimate can be established by assuming the head and shoulders pattern of Comet Halley had an average return period of 78 years while the body pattern averaged out at 76 years i.e. a difference of two year.
…
This estimate indicates the shortened Earth Year contained 355 or 356 days.

What I didn’t realise was a very intriguing manuscript has recently been discovered in the special collections of the City Library in London.

The two members of staff, Rob Hodgson and Simon Bralee, unearthed the manuscript whilst auditing the collections.
…
The manuscript contains two texts –

the Algorismus (or De Arte Numerandi)
and
the De Anni Ratione –

written by Johannes de Sacrobosco (aka John of Holywood or Halifax).

The Algorismus was the first major text of the Western tradition that dealt with, and examined, the use of Hindu-Arabic numerals.

It became a key text of the medieval European university curriculum.

Before this date, Roman numerals were used.

One of the very eye-catching features of this manuscript is a circular calendar containing 364 days which has a slightly different approach to allocating days across the 12 months of the year i.e. every other month is a hollow month with less than 31 days. 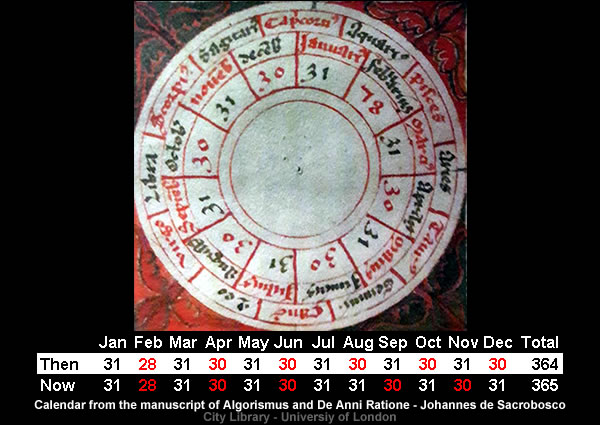 To understand the implications [of a 364 day calendar] the numbers from the Comet Halley Calendar can be re-worked in minutes to establish a Comet Halley Clock.

In this particular instance, the Comet Halley Clock shows a 364 day calendar [during the Earth’s orbital excursion] had an Earth Day that’s only 23 hours and 28 minutes.

The manuscript hasn’t been formally dated [as far as I know] but it’s likely to have been created sometime between [officially] 1235 and the Gregorian Calendar Reforms in 1582.

The mid-point between these extremes falls just at the end of the Earth’s orbital excursion: 1408.5.

Johannes de Sacrobosco, also written Ioannis de Sacro Bosco (c. 1195 – c. 1256), was a scholar, monk and astronomer who was a teacher at the University of Paris
…
Sacrobosco’s Algorismus aka De Arte Numerandi is thought to have been his first work, and the date is estimated at about 1225, and before 1230.
…
What Sacrobosco may be most famous for is his criticism of the Julian calendar. In his book on computus, entitled in Latin De Anni Ratione (English: On reckoning the years), dated circa 1235, he maintained that the Julian calendar had accumulated an error of ten days and that some correction was needed.

Parchment is a writing material made from specially prepared untanned skins of animals—primarily sheep, calves, and goats.
…
In the later Middle Ages, especially the 15th century, parchment was largely replaced by paper for most uses except luxury manuscripts, some of which were also on paper.

If it’s assumed this 364 day calendar was an early attempt to resolve the notorious Julian Calendar problem then this manuscript has some very interesting implications:

The Earth’s orbital period stabilised and it’s period of rotation slowed by 32 minutes between [roughly] 1235 and 1752 when the British Calendar Reforms were implemented.

Arguably, the rise to dominance of the Christian solar sect was delayed until the Earth Year and Earth Day started to stabilise during the 16th century.

Within this context the introduction of Gradualism in 1795 [and the associated banishment of Catastrophism] was the covert continuation of the 1752 Calendar Reforms.

In the natural sciences, gradualism is the theory which holds that profound change is the cumulative product of slow but continuous processes, often contrasted with catastrophism.

The theory was proposed in 1795 by James Hutton, a Scottish geologist, and was later incorporated into Charles Lyell’s theory of uniformitarianism.

Tenets from both theories were applied to biology and formed the basis of early evolutionary theory.

The Conservation of Angular Momentum principles imply the slowing of the Earth’s rate of rotation [in this short time-frame] will have been associated with an increase in it’s diameter. 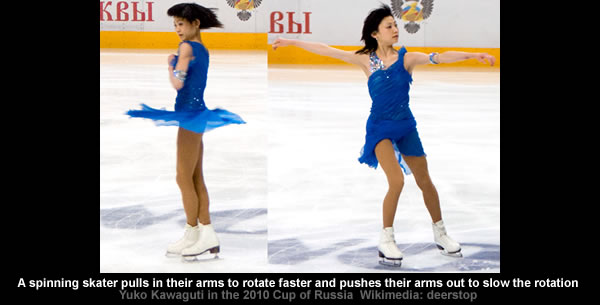 The conservation of angular momentum explains the angular acceleration of an ice skater as she brings her arms and legs close to the vertical axis of rotation.

By bringing part of the mass of her body closer to the axis she decreases her body’s moment of inertia.

It implies the cartographic evidence tracking this increase in the Earth’s diameter is valid. 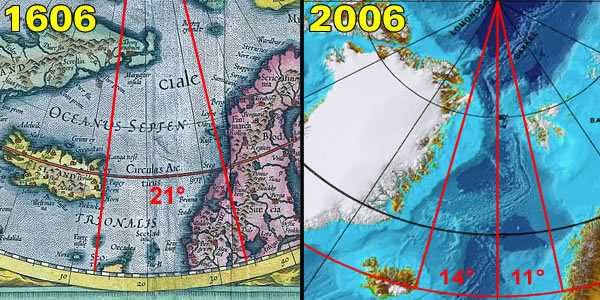 It implies the Earth’s history of rotational decay [and inflation] is valid.

The long term climate forecast is for a continuation of the well established cooling trend.