The History of the Decline and Fall of the Roman Empire is a six-volume work by the English historian Edward Gibbon… Volume I was published in 1776 and went through six printings. Volumes II and III were published in 1781; volumes IV, V, and VI in 1788–1789.
…
According to Gibbon, the Roman Empire succumbed to barbarian invasions in large part due to the gradual loss of civic virtue among its citizens.

They had become weak, outsourcing their duty to defend their empire to barbarian mercenaries, who then became so numerous and ingrained that they were able to take over the Empire.

In the decades and centuries since Edward Gibbon his barbarian storyline has become firmly entrenched in the historical narrative.

The Marcomannic Wars were a series of wars lasting over a dozen years from about 166 until 180 AD. These wars pitted the Roman Empire against, principally, the Germanic Marcomanni and Quadi and the Sarmatian Iazyges; there were related conflicts with several other barbarian peoples along both sides of the whole length of the Roman Empire’s northeastern European border, the river Danube

Marcomannia was a proposed province of the Roman Empire that Marcus Aurelius planned to establish in this territory. It was inhabited by the Germanic tribes of Marcomanni and Quadi, and lay in the western part of what are today Slovakia and Moravia.
…
Marcus Aurelius wanted to create a new Roman province called Marcomannia in those conquered territories, but his death put an end to the project.

However, these particular Germanic Barbarians are a “matter for conjecture” because a “pall of near-silence” enfolds their history in the 2nd century AD.

After the relative richness of the written sources for the Germanic peoples and their dealings with Rome during the first century A.D., a pall of near-silence envelops the following century.

The wars generally referred to as the Marcomannic wars in the reign of Marcus Aurelius are sketchily recorded and reveal Germanic society fitfully, and then only in limited aspects.

This extensive gap cannot be filled by recourse to archaeological evidence, important though this is.
…
It is particularly unfortunate that the written sources give out when they do.
…
Many of the small tribes known to Tacitus and Ptolemy are scarcely mentioned thereafter or disappear entirely, while larger groupings of a different stamp increasingly dominate the lands close to the Rhine and Danube frontiers, chief among them the Goths, Alamanni and Franks.

We can perceive, dimly, the scale of the changes wrought from the second century onward.

How those changes came about is matter for conjecture.

A similar shroud of secrecy envelops the Roman Hero of the Marcomannia project because the major sources are said to be “patchy and frequently unreliable” whilst the minor sources are deemed to be “full of fiction” when they warble about Marcus Aurelius.

Marcus Aurelius was Roman emperor from 161 to 180, ruling jointly with Lucius Verus until Verus’ death in 169 and jointly with his son, Commodus, from 177.
…
The major sources depicting the life and rule of Marcus Aurelius are patchy and frequently unreliable.

The most important group of sources, the biographies contained in the Historia Augusta, claim to be written by a group of authors at the turn of the 4th century AD, but are in fact written by a single author from the later 4th century (c. 395 AD).

The later biographies and the biographies of subordinate emperors and usurpers are a tissue of lies and fiction, but the earlier biographies, derived primarily from now-lost earlier sources (Marius Maximus or Ignotus), are much more accurate.

For Marcus’ life and rule, the biographies of Hadrian, Antoninus Pius, Marcus and Lucius Verus are largely reliable, but those of Aelius Verus and Avidius Cassius are full of fiction.

On the plus side archaeologists have removed vast quantities of material [including soil, sand, gravel, black earth and assorted debris] to reveal Roman remnants.

Apparently, during their long months [and years] of hard labour, these archaeologists have avoided seriously considering the possibility that Edward Gibbon’s barbarian invasions should be taken with a pinch of salt [and several sacks of soil].

One of the more spectacular sites associated with the Marcomannia project is Gorsium.

Gorsium-Herculia is one of Hungary ‘s most important Roman areas.

At this time, not only the outer quarters were burned, but the fire in the holy district was also greatly destroyed. This blow was quickly overthrown by the city. The buildings of the Emperor’s Culture were restored. At that time, the hall of the Provincial Assembly was renewed.

Ninety years later, the city flourished in the Severus era.
…
In 258, the city council’s treasury was dumped underground under the threat of a fast-paced civil war. The 3134 double dénar was produced 1725 years later during the excavations.

During the plunder all over Pannonia, the barbarians made Gorsium with the ground. 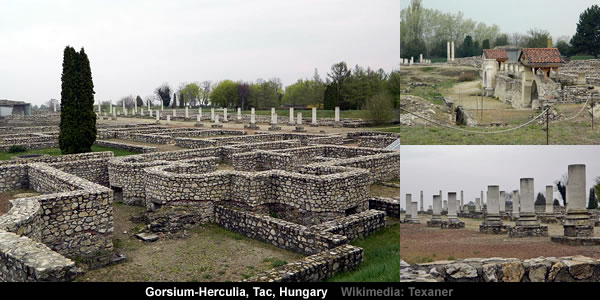 Overall, the “great damage” associated with the Marcomannia project has been observed at 33 sites and [very sensibly] labelled a “catastrophe-horizon” by Dénes Gabler.

The coin-hoards were rarely found in the sites of destructions related to the Marcomannic wars. Destruction-levels in the forts and towns of the Danubian provinces indicate the intensity of barbarian incursions in AD. 170.

In Raetia and Noricum there were already earlier Antonine burnt layers recorded.

The events of the Marcomannic wars were indicated by destruction-levels dated by coins and samian ware. In the Danubian provinces this catastrophe-horizon can be observed by Antonine samian from Lezoux, Ittenweiler or Rheinzabern on 33 sites. This pottery help us to recognise the hints of the wars in forts, vici of auxiliary units, towns and settlements during the reign of Marcus Aurelius.

On the basis of the finds we can obtain conclusions concerning barbarian incursions in AD 170 in Noricum and Upper Pannonia and invasion of Sarmatians in AD 178 in Lower Pannonia. The war caused a great damage in the provinces, which can be observed also by archaeological finds.

The Gorsium Ceramic Chronology displays similarities and synchronicities with the Glen Turret Fan Chronology from Scotland.

Aligning the Gorsium Ceramic, Glen Turret Fan and Old Japanese Cedar chronologies provides some noteworthy perspectives into the events leading up to the Heinsohn Horizon [circa 912 CE].

Therefore, some 700 years of the 1st millennium (230 to 930s) have neither strata nor tree samples for C14 or dendro-chronological dating.

Secondly, the development of Gorsium [Hungary] appears to have begun immediately after the Sand Layer was deposited around 50 AD aka 712 CE.

Arguably, the deposition of this Sand Layer marks the beginning of the decline of Roman Britain and the burial of an aqueduct under 7 metres of sand and gravel in Cologne [Germany].

Thirdly, a significant decline in Gorsium [Hungary] occurred immediately after the Deformed Layers appear in the Glen Turret Fan Chronology around 160 AD aka 872 CE.

The only significant issue highlighted by the Gorsium Ceramic Chronology is the dating of the Heinsohn Horizon to 912 CE on Leona Libby’s Old Japanese Cedar chronology.

However, the Gorsium Ceramic Chronology very graphically confirms Gunnar Heinsohn’s statement that the Heinsohn Horizon occurred in the 230s AD aka 930s CE.

FOOTNOTES
The death of Marcus Aurelius is said to mark the end of two [miraculous] centuries of “relative peacefulness” in the Roman Empire.

Marcus Aurelius was Roman emperor from 161 to 180, ruling jointly with Lucius Verus until Verus’ death in 169 and jointly with his son, Commodus, from 177.
…
His death in 180 is considered the end of the Pax Romana and the increasing instability in the west that followed has traditionally been seen as the beginning of the eventual fall of the Western Roman Empire.

Pax Romana was a long period of relative peacefulness and minimal expansion by the Roman military force experienced by the Roman Empire after the end of the Final War of the Roman Republic and before the beginning of the Crisis of the Third Century.
…
Its span was approximately 206 years (27 BC to AD 180), from the time of Augustus becoming emperor to the death of Emperor Marcus Aurelius.
…
The Pax Romana is said to have been a “miracle” because prior to it there had never been peace for so many centuries in a given period of history. 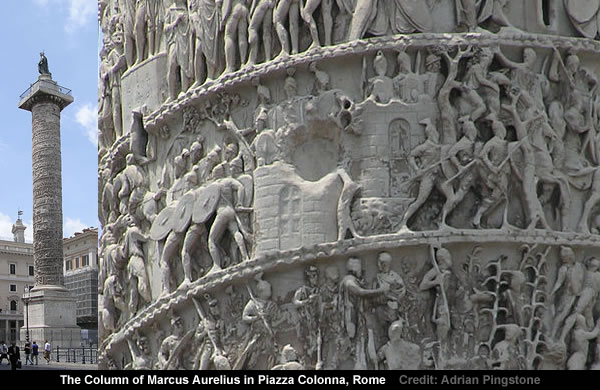 The Column of Marcus Aurelius is a Roman victory column in Piazza Colonna, Rome, Italy. It is a Doric column featuring a spiral relief: it was built in honour of Roman emperor Marcus Aurelius and modeled on Trajan’s Column.
…
The spiral picture relief tells the story of Marcus Aurelius’ Danubian or Marcomannic wars, waged by him from 166 to his death.

Because the original dedicatory inscription has been destroyed, it is not known whether it was built during the emperor’s reign (on the occasion of the triumph over the Marcomanni, Quadi and Sarmatians in the year 176) or after his death in 180; however, an inscription found in the vicinity attests that the column was completed by 193.

Similarly, it’s questionable whether the Meditations of Marcus Aurelius are actually associated with Marcus Aurelius because the source manuscript was “lost” soon after this work first appeared in print in 1559.

The struggle against the Germans and Sarmatians occupied the major part of the reign of Roman emperor Marcus Aurelius, and it was during his campaigns against them that he started writing his philosophical work Meditations, whose book 1 bears the note “Among the Quadi at the Granua”.

Meditations is a series of personal writings by Marcus Aurelius, Roman Emperor from 161 to 180 AD, recording his private notes to himself and ideas on Stoic philosophy.
…
The editio princeps of the original Greek (the first print version) was published by Conrad Gessner and his cousin Andreas in 1559.

Both it and the accompanying Latin translation were produced by Wilhelm Xylander.

His source was a manuscript from Heidelberg University, provided by Michael Toxites. By 1568, when Xylander completed his second edition, he no longer had access to the source and it has been lost ever since.

Marcus Aurelius wrote the 12 books of the Meditations in Koine Greek as a source for his own guidance and self-improvement.

However, whilst the academics are busy working on their Latin character set the “educated Roman citizens” are still busy conversing in Greek whilst the “first Popes” were apparently still writing in Greek during the 2nd or 3rd centuries AD.

Marcus Aurelius wrote the 12 books of the Meditations in Koine Greek as a source for his own guidance and self-improvement.

Koine Greek, also known as Alexandrian dialect, common Attic, Hellenistic or Biblical Greek, was the common supra-regional form of Greek spoken and written during Hellenistic and Roman antiquity and the early Byzantine era, or Late Antiquity
…
Literary Koine was the medium of much of post-classical Greek literary and scholarly writing, such as the works of Plutarch and Polybius. Koine is also the language of the Christian New Testament, of the Septuagint (the 3rd-century BC Greek translation of the Hebrew Bible), and of most early Christian theological writing by the Church Fathers. In this context, Koine Greek is also known as “Biblical”, “New Testament”, “ecclesiastical” or “patristic” Greek.

However, as this liturgical language is still used by the Greek Orthodox Church it’s very possible the Meditations of Marcus Aurelius [like so many other source documents] were fabricated in the 2nd millennium CE.

Koine Greek… continues to be used as the liturgical language of services in the Greek Orthodox Church.