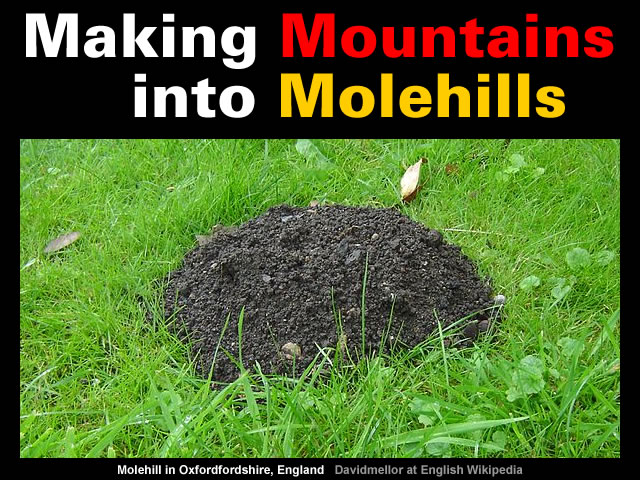 A diversionary [and defensive] tactic deployed during debates is to claim your opponent is over-reacting and [metaphorically] “making a mountain out of a molehill”.

Making a mountain out of a molehill is an idiom referring to over-reactive, histrionic behaviour where a person makes too much of a minor issue.

Unfortunately, deploying this metaphor [implicitly] informs your opponent you are in a defensive position and “on the back foot”.

on the back foot
2. (idiomatic) in a defensive posture; on the defensive; off balance; at a disadvantage.

A far more effective strategy in the information war is for authority figures to control the topics other people discuss by setting the agenda.

Politicians, journalists, academics and many others specialise in setting the agenda.

One very effective diversionary [and offensive] tactic that’s deployed when setting the agenda is to misdirect the audience so that [metaphorical] mountains become molehills.

In the realm of academia the greatest existential threat to their snug sinecures and tramline thinking is [very appropriately] the concept of Extinction Events.

An extinction event (also known as a mass extinction or biotic crisis) is a widespread and rapid decrease in the biodiversity on Earth.

Such an event is identified by a sharp change in the diversity and abundance of multicellular organisms.

The academic authorities understand that Extinction Events require very careful management because they have the potential to devastate many consensus theories that are deeply embedded in the disciplines of astronomy, biology, geology, history and physics.

The academic authorities also understand that Extinction Events are very much like Death Certificates in so far as games can be played by misdirecting and muddling the debate regarding the Immediate, Intermediate and [especially] Underlying Causes.

● Immediate cause – – – – – carbon monoxide poisoning
● Intermediate cause – – – gas burning appliance
● Underlying causes – – – lack of: maintenance / ventilation / appliance isolation / regulation / inspection / risk assessment / understanding / education and so on and so forth…

● Flood basalt events: 11 occurrences, all associated with significant extinctions
But Wignall (2001) concluded that only five of the major extinctions coincided with flood basalt eruptions and that the main phase of extinctions started before the eruptions.

● Sea-level falls: 12, of which seven were associated with significant extinctions.

A wonderful example of this diversionary [and diversified] agenda playing out is a recent article that emphasises the asteroid and volcanic extinction explanations [Hat Tip to CW].

The Nastiest Feud in Science

A Princeton geologist has endured decades of ridicule for arguing that the fifth extinction was caused not by an asteroid but by a series of colossal volcanic eruptions.

But she’s reopened that debate.

This agenda very cleverly sidesteps the most important question of all:

What turns a Disaster into an Extinction?

Why didn’t the survivor population recover?

In the natural course of events there are survivors on the periphery of every natural disaster that [eventually] repopulate the disaster zone.

Completing the Extinction Certificate for any natural Extinction is difficult.

The Extinction Certificate for the giant millipede is a challenge because it needs to include the Immediate, Intermediate and Underlying Causes of extinction.

Arthropleura is a genus of extinct millipede arthropods that … ranged in length from 0.3 to 2.3 metres and a width up to 50 centimetres.

This is an invalid Extinction Certificate for the giant millipede.

The problem being that this Extinction Certificate could apply to any life form.

It doesn’t address why the giant millipede was specifically destined for extinction.

The underlying principle of extinction is:

Leg Bone Strength
The strength of leg bones necessary to support the mass of today’s life has been measured by a number of researchers (Anderson et al, 1985). Researchers have also estimated the body mass of dinosaurs based on the volume of these dinosaurs (Colbert, 1962).

Since leg bone strength will be weaker in a reduced gravity, the gravity at the time of ancient life can be estimated from fossil leg bones.

In general, the body mass estimates based on volume methods greatly exceed those based on leg bone strength.

This variation between the body mass estimates and the leg bone strength can be used to roughly calculate ancient gravity when the ancient life was alive.

Ligament Strength
Ligaments are not fossilised but the size and shape of dinosaurs’ bones have been used to estimate the strength of the neck ligaments of Diplodocus (Alexander, 1989).

The gravity at the time of ancient life can be estimated from the strength of neck ligaments.

Ancient Life’s Gravity and its Implications for the Expanding Earth
Stephen Hurrell
Interdisciplinary Workshop on The Earth Expansion Evidence:
A Challenge for Geology, Geophysics and Astronomy
See: https://malagabay.wordpress.com/2013/06/16/the-inflating-earth-4-gravity/

The Extinction Certificate for large dinosaurs based upon the work of Stephen Hurrell would read as follows.

The Extinction Certificate for most ancient aquatic species is very straight forward once it’s recognised that aquatic fossils are only found on dry land.

Thus an ancient historical narrative begins to emerges of an inflating Water World which was once covered by a network of interconnected inland seas.

These inland seas have since [in the main] drained away into the [recently created] oceans basins leaving behind isolated lakes [many of which have evaporated away] and some isolated populations of seals.

The beastly Basilosaurus has been banished to “30 to 40 million years ago”.

And the dreadful Dorudon has been dispatched to “40.4 to 33.9 million years ago”.

The remains of this dangerous duo that “lived in warm seas around the world” have been found in the dessicated desert of Wadi Al-Hitan – West of Faiyum in Egypt.

These Extinction Certificates follow in the footsteps of D’Arcy Wentworth Thompson who very effectively threw Newton, Darwin and a whole host of academic acolytes under the bus when his On Growth and Form was published in 1917.

The central theme of On Growth and Form is that biologists of its author’s day overemphasized evolution as the fundamental determinant of the form and structure of living organisms, and underemphasized the roles of physical laws and mechanics.
…
Thompson pointed out – in example after example – correlations between biological forms and mechanical phenomena.

By focussing upon the Underlying Causes of Extinction Events the mainstream has very effectively set an agenda that diverts and misdirects the audience.

Under their guidance the vitally important issues of the Intermediate and Immediate Causes of extinction have been sidestepped and metaphorically made into molehills.

Another century of academic inanity beckons unless this agenda is altered.

8 Responses to Making Mountains into Molehills