Calendars and the Level of the Nile 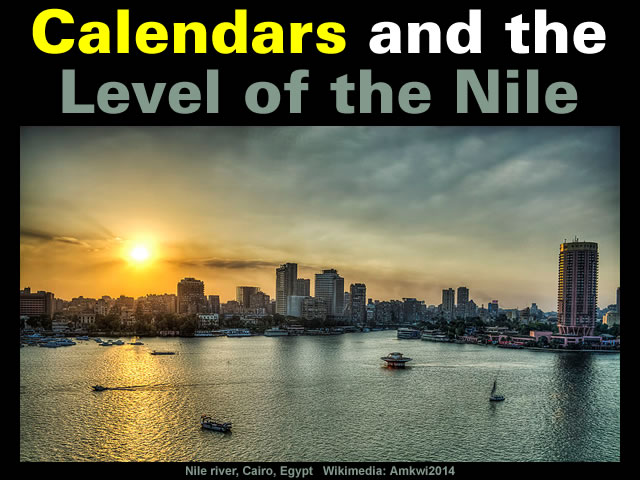 Isaac Newton claimed in 1676 that he had “seen further” by “standing on the shoulders of giants”.

Since then academia has institutionalised this Newtonian approach to knowledge building.

Unfortunately, this Newtonian technique is fatally flawed because “giants” only exist in fairy tales.

The Level of the Nile

One of the more remarkable datasets tucked away in the academic archives is “an almost continuous series” of Nile river level measurements that are said to span 641 AD to 1480 AD.

It will be noticed that both maxima and minima show a general upward trend.

This is due to the deposit of silt, which has been steadily raising the level of the Nile bed for thousands of years, at the rate of about 0.1 metre per century.
…
The records are made up as follows : there is an almost continuous series of records of both high and low levels extending from A.D. 641 to 1480.
…
There are no connected series of records known earlier than A.D. 641, but Prince Omar Toussoun gives determinations of the levels which constituted ” weak floods,” ” good floods,” and ” strong floods ” in the fifth century B.C., and in the first, second, and fourth centuries A.D., as well as in the later centuries.

The low water level of the Nile is deemed to be the “better guide” to rainfall of equatorial Africa.

The minimum level, on the other hand, depends chiefly on the rainfall in the equatorial belt of low pressure, which is very closely connected with the intensity of the general circulation of the atmosphere.

For this reason the level of the Nile during the stage of low water is the better guide to the general rainfall of equatorial Africa, while the flood levels represent the monsoon rainfall of the eastern highlands.

The curious aspect of this “ almost continuous series” of Nile low water records is that it’s not synchronised with Leona Libby’s Old Japanese Cedar chronology.

For example, the Arabian Horizon centred on 637 CE in Leona Libby’s chronology is dated to [about] 778 AD in the Nile low water chronology i.e. a 141 year mismatch.

It is possible to achieve a fairly good alignment of the Nile low water chronology by matching major inflection points in Leona Libby’s chronology.

Working backwards in time it appears the Nile river dataset that ends in 1480 AD is aligned with 1386 CE in Leona Libby’s chronology i.e. a mismatch of 94 years.

Overall, the realignment is spot on except for a mismatch at the Arabian Horizon minimum of [about] 40 years.

Researching the apparent 94 year mismatch in the Nile river dataset is an interesting journey into the assumptions and beliefs that underpin the treasured tenets of academia.

The beginning of the Nile river dataset in 641 AD coincides with the Islamic conquest of Egypt.

The Byzantines were able to regain control of the country after a brief Sasanian Persian invasion early in the 7th century amidst the Byzantine–Sasanian War of 602–628 during which they established a new short-lived province for ten years known as Sasanian Egypt, until 639–42, when Egypt was invaded and conquered by the Islamic Empire by the Muslim Arabs.

The Islamic, Muslim, or Hijri calendar is a lunar calendar consisting of 12 months in a year of 354 or 355 days.
…
The Islamic calendar employs the Hijri era whose epoch was retrospectively established as the Islamic New Year of 622 AD/CE.
…
In the West, dates in this era are usually denoted AH (Latin: Anno Hegirae, “in the year of the Hijra”) in parallel with the Christian (AD), Common (CE) and Jewish eras (AM).

The Gregorian calendar is the most widely used civil calendar in the world.
It is named after Pope Gregory XIII, who introduced it in October 1582.
The calendar spaces leap years to make the average year 365.2425 days long, approximating the 365.2422 day tropical year that is determined by the Earth’s revolution around the Sun.

The visibility criterion, and the differences between Islamic and Gregorian calendars, have produced certain problems for historians, not least for the historians of Islamic science, in dating manuscripts or events exactly.

Amongst these problems is the Tabular Islamic calendar used by early Islamic astronomers that, for example, begins the day at noon [instead of sunset in the Islamic civil calendar].

The Tabular Islamic calendar (an example is the Fatimid or Misri calendar) is a rule-based variation of the Islamic calendar.
…
It has the same numbering of years and months, but the months are determined by arithmetical rules rather than by observation or astronomical calculations.

It was developed by early Muslim astronomers of the second hijra century (the 8th century of the Common Era) to provide a predictable time base for calculating the positions of the moon, sun, and planets.

In the civil Hijra calendar the day began at sunset and some months were determined by observation of the New Moon.

But in the astronomical Hijra calendar the day began at noon, and the pattern of months lengths and leap years was fixed.

At this juncture it’s interesting to note that although the modern Islamic calendar is classified as a “lunar calendar” it’s days were originally based upon solar observations i.e. “noon” for astronomers and “sunset” for civil uses.

On the other hand, these incongruities disappear if the early Islamic astronomers were originally observing a solar year of 354.25 days.

In fact, it’s now said the Islamic calendar was originally a lunisolar calendar.

This reckons time backwards according to the lunar calendar, which causes it to miss the three intercalary months (about 88 days) added to the then-lunisolar calendar between the time of the Hijra and AH 10, when Muhammad is recorded as having received a revelation prohibiting their use.

This would mean the early Islamic calendar could have been tracked using the lunisolar Coligny Calendar that’s been traditionally dated to the 2nd century AD.

The 2nd century AD Coligny Calendar is an academic curiosity that I stumbled upon whilst researching the solar credentials of the Julian calendar.

The Coligny Calendar is generally said to be a lunisolar calendar with intercalary months.

But beneath all the fevered speculation about intercalary months lies a 2nd century AD calendar from Roman Gaul that “yields a total of 354 or 355 days” just like the Islamic lunar calendar.

Researchers who are interesting in the finer details of the Islamic calendar are recommended to read al-Bīrūnī’s [973–1050] Chronology of Ancient Nations.

The most extensive study of calendars in the Middle Ages is al-Bīrūnī’s Chronology of Ancient Nations (tr. Sachau 1879).

Abū Rayḥān Muḥammad ibn Aḥmad Al-Bīrūnī (973–1050), known as Al-Biruni in English, was an Iranian scholar and polymath.
…
Biruni is regarded as one of the greatest scholars of the medieval Islamic era and was well versed in physics, mathematics, astronomy, and natural sciences, and also distinguished himself as a historian, chronologist and linguist.

However, the manuscripts for al-Bīrūnī’s Chronology of Ancient Nations are “not complete”, are “full of faults” and only date from the 17th century.

In the form in which I offer the book to the reader it is not complete.

Many most essential parts, both large and small, are missing, e.g. the chapter on Zoroaster…
…
The basis of my edition consists of two manuscripts of the seventeenth and one of the nineteenth century, all full of faults, and — what is worse ! — agreeing with each other almost in every particular.

In fact, all three copies represent one and the same original.

The Chronology of Ancient Nations;
An English version of the Arabic text of the Athâr-ul-Bâkiya of Albîrûnî,
or “Vestiges of the past”
Muhammad ibn Ahmad Biruni – Translated: Eduard Sachau – 1879
https://archive.org/details/chronologyofanci00biru/page/n16

This clearly raises the distinct possibility that al-Bīrūnī’s manuscript has been sanitised to support the earliest known reconciliation of the Islamic and Christian calendars that’s dated to 1609.

Since the beginning of the 17th century, when Western scholars began to pay attention to histories of other peoples and cultures, concordances for the Hijra and the Christian eras, have been produced.

The oldest one is in Latin and was produced in 1609.

The arcane calculations required to convert between Islamic and Christian dates led to the development of conversion tables that [currently] start the Hijri era on 19th April 622 CE.

This cycle, which comprises a period of thirty lunar years, is thus constituted: — a duration of thirty and twenty-nine days alternately is, in the first instance, assigned to the twelve months of the Mahometan year, which would accordingly contain 354 days.

Neglecting the seconds, which only in 2,400 years accumulate to a day, the difference of 8h 48m amounts, at the conclusion of 30 such periods, to precisely 11 days; the astronomical and civil cycles comprising, the former 10,631, the latter 10,620 days.

In order, therefore, to adjust this difference, and to keep the cyclical kalendar in accordance with the natural one, 11 days are intercalated in the former, in the course of every 30 lunar years.

However, the official start date of the Hijri era is subject to interpretation and in recent history it has begun on the 15th and 16th July 622 AD.

Its Julian equivalent was April 19 but it is sometimes mistakenly placed on July 16.

The error derives from the tabular Islamic calendar which was devised by later Islamic astronomers.

This reckons time backwards according to the lunar calendar, which causes it to miss the three intercalary months (about 88 days) added to the then-lunisolar calendar between the time of the Hijra and AH 10, when Muhammad is recorded as having received a revelation prohibiting their use.

Therefore, it’s probable the 94 year mismatch identified in the Nile river dataset is partly associated with the religious nature of calendars and partly caused by the gradualist settled science belief that the Earth’s orbital period has been constant since [at least] 46 BC.

The accuracy of retrospective astronomical calculations are definitely not beyond doubt.

The Islamic calendar has probably lost [about] 94 years somewhere along the way.

8 Responses to Calendars and the Level of the Nile