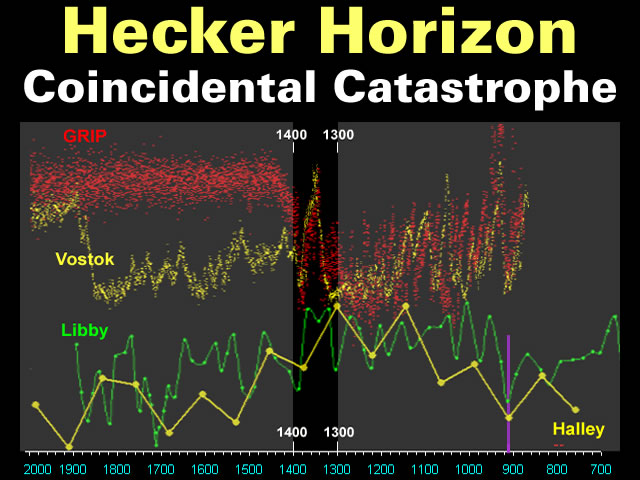 One of the bigger challenges presented by the Hecker Horizon is trying to comprehend the dramatic rise and fall in the temperature proxies during the 14th century.

The Great Plague
The apex of this rise and fall in the proxy records coincides with the The Great Plague that is estimated to have killed 30–60% of Europe’s total population.

The Black Death, also known as the Great Plague, the Black Plague, or simply the Plague, was one of the most devastating pandemics in human history, resulting in the deaths of an estimated 75 to 200 million people in Eurasia and peaking in Europe from 1347 to 1351.
…
The Black Death is thought to have originated in the dry plains of Central Asia, where it travelled along the Silk Road, reaching Crimea by 1343. From there, it was most likely carried by Oriental rat fleas living on the black rats that were regular passengers on merchant ships, spreading throughout the Mediterranean Basin and Europe.

The Black Death is estimated to have killed 30–60% of Europe’s total population.
…
It took 200 years for the world population to recover to its previous level.

Plague Problems
Although the plague narrative is well established as the primary cause of death the storyline has more than a few issues.

3) Estimating Great Plague deaths is “hampered by the lack of reliable statistics” and [without any trace of irony] some modern historians question the veracity of “the clergy”.

It is recognised that an epidemiological account of the plague is as important as an identification of symptoms, but researchers are hampered by the lack of reliable statistics from this period. … Estimates of plague victims are usually extrapolated from figures from the clergy.

4) Many aspects of the The Great Plague narrative have been “significantly challenged”.

The plague theory was first significantly challenged by the work of British bacteriologist J. F. D. Shrewsbury in 1970, who noted that the reported rates of mortality in rural areas during the 14th-century pandemic were inconsistent with the modern bubonic plague, leading him to conclude that contemporary accounts were exaggerations.

In 1984, zoologist Graham Twigg produced the first major work to challenge the bubonic plague theory directly, and his doubts about the identity of the Black Death have been taken up by a number of authors, including Samuel K. Cohn, Jr. (2002 and 2013), David Herlihy (1997), and Susan Scott and Christopher Duncan (2001).
…
In addition to arguing that the rat population was insufficient to account for a bubonic plague pandemic, sceptics of the bubonic plague theory point out that the symptoms of the Black Death are not unique (and arguably in some accounts may differ from bubonic plague); that transference via fleas in goods was likely to be of marginal significance; and that the DNA results may be flawed and might not have been repeated elsewhere or were not replicable at all, despite extensive samples from other mass graves.

Gradualist Solutions
Gradualist historians have adopted a couple of strategies to resolve these plague problems.

One approach is to simply discount the death as exaggerations.

Unfortunately, this approach produces equally unreliable estimates that suggest The Great Plague only reduced the European population by [about] 10%.

The alternate approach is to substitute [or combine] plague with different deadly diseases.

A variety of alternatives to Y. pestis have been put forward.

Twigg suggested that the cause was a form of anthrax, and Norman Cantor thought it may have been a combination of anthrax and other pandemics. Scott and Duncan have argued that the pandemic was a form of infectious disease that they characterise as hemorrhagic plague similar to Ebola.
…
However, no single alternative solution has achieved widespread acceptance.

Many scholars arguing for Y. pestis as the major agent of the pandemic suggest that its extent and symptoms can be explained by a combination of bubonic plague with other diseases, including typhus, smallpox and respiratory infections.

Poorly Explained Away Deaths
The poorly explained away deaths associated with The Great Plague suggests the catastrophic concept of cometary cyanogen [being injected into the atmosphere] should also be considered as a possible attack vector.

… if the cyanogen managed to penetrate down into the lower atmosphere then there’s the possibility of significant unexplained [or poorly explained away] deaths.

Cyanogen is the chemical compound with the formula (CN)2.
…
Cyanogen gas is an irritant to the eyes and respiratory system.
Inhalation can lead to headache, dizziness, rapid pulse, nausea, vomiting, loss of consciousness, convulsions, and death, depending on exposure. Lethal dose through inhalation typically ranges from 100 to 150 milligrams (1.5 to 2.3 grains).
Inhalation of 900 ppm over a period of 10 minutes is considered lethal.

Cometary cyanogen clearly qualifies as an “airborne plague that attacks the lungs”.

In addition to the bubonic infection, others point to additional septicemic (a type of “blood poisoning”) and pneumonic (an airborne plague that attacks the lungs before the rest of the body) forms of the plague, which lengthen the duration of outbreaks throughout the seasons and help account for its high mortality rate and additional recorded symptoms. In 2014, Public Health England announced the results of an examination of 25 bodies exhumed in the Clerkenwell area of London, as well as of wills registered in London during the period, which supported the pneumonic hypothesis.

If cometary cyanogen is a mutagenic chemical then it’s very possible new strains of infectious diseases developed during The Great Plague.

If cometary cyanogen is mutagenic then The Great Plague is similar to the 1918 Influenza Pandemic that killed “50 to 100 million” people.

The grotesque realities of the First World War didn’t stop with the 1918 armistice for those exposed to mustard gas because it is “strongly mutagenic and carcinogenic”.

The “strongly mutagenic” effects of mustard gas became apparent in 1918 when an “unusually deadly influenza” spread around the globe.

The 1918 influenza pandemic (January 1918 – December 1920; colloquially known as Spanish flu) was an unusually deadly influenza pandemic, the first of the two pandemics involving H1N1 influenza virus. It infected 500 million people around the world,[2] including people on remote Pacific islands and in the Arctic, and resulted in the deaths of 50 to 100 million (three to five percent of the world’s population), making it one of the deadliest natural disasters in human history.

Poorly Explained Away Heat
If The Great Plague is associated with cometary cyanogen then another aspect of this catastrophe should be poorly explained away objects that have been exposed the “second-hottest-known natural flame”.

… if the cyanogen managed to penetrate the lower atmosphere then there’s the possibility the gas will ignite with the “second-hottest-known natural flame”.

Cyanogen produces the second-hottest-known natural flame (after carbon subnitride) with a temperature of over 4,525 °C (8,177 °F) when it burns in oxygen.

These poorly explained away objects include the “vitrified ramparts” found in Europe that have been dated between 1000 and 1500 BP.

These poorly explained away objects would be similar to the settlements that were “completely burned every 75–80 years” to create the Burned House Horizon in Southeastern and Eastern Europe.

In the archaeology of Neolithic Europe, the burned house horizon is the geographical extent of the phenomenon of presumably intentionally burned settlements.

This was a widespread and long-lasting tradition in what is now Southeastern and Eastern Europe, lasting from as early as 6500 BCE (the beginning of the Neolithic) to as late as 2000 BCE (the end of the Chalcolithic and the beginning of the Bronze Age)
…
Cucuteni-Trypillian settlements were completely burned every 75–80 years, leaving behind successive layers consisting mostly of large amounts of rubble from the collapsed wattle-and-daub walls. This rubble was mostly ceramic material that had been created as the raw clay used in the daub of the walls became vitrified from the intense heat that would have turned it a bright orange color during the conflagration that destroyed the buildings, much the same way that raw clay objects are turned into ceramic products during the firing process in a kiln. Moreover, the sheer amount of fired-clay rubble found within every house of a settlement indicates that a fire of enormous intensity would have raged through the entire community to have created the volume of material found.

The Burned House Horizon in Southeastern and Eastern Europe is said to have lasted “from as early as 6500 BCE to as late as 2000 BCE” but the “burned” architecture suggests there might well be very big problems with the official mainstream dating.

The Cucuteni–Trypillia culture, also known as the Tripolye culture, is a Neolithic–Eneolithic archaeological culture (c. 5200 to 3500 BC) of Eastern Europe.

If The Great Plague is associated with cometary cyanogen then the close proximity of the Burned House Horizon to the origins of the plague “in the dry plains of Central Asia” [reaching Crimea by 1343] is probably not just a remarkable coincidence.

In this scenario the cometary cyanogen crossed Central Asia, the Black Sea and Greece.

The Black Death is thought to have originated in the dry plains of Central Asia, where it travelled along the Silk Road, reaching Crimea by 1343.

The plague known as the Black Death, which started in the Mongol dominions and spread to Europe, added to the confusion. Disease devastated all the khanates, cutting off commercial ties and killing millions.
…
In 1304, the three western khanates briefly accepted the nominal suzerainty of the Yuan dynasty, but in 1368 the Han Chinese Ming dynasty took over the Mongol capital. The Genghisid rulers of the Yuan retreated to the Mongolian homeland and continued to rule there as the Northern Yuan dynasty.

This track of cometary cyanogen might just explain the sintering of the Loukous aqueduct sometime between Roman Times and “around 1400”.

The Transfiguration Monastery is still inhabited by a few nuns. In the centre of the complex stands a cross dome church, built around 1400, the bricks are from antiquity and partly from a sanctuary, partly from a nearby rediscovered villa of Herod Atticus.

At the entrance to the monastery, one passes the remains of an aqueduct that was sintered to give it a mysterious appearance.

Sintering is the process of compacting and forming a solid mass of material by heat or pressure without melting it to the point of liquefaction.

Hat Tip: Yves who references GaryN on the TB forum.

Readers who discover the Loukous aqueduct is just too hot to handle are advised to seek solace [and a pair of oven gloves] from their nearest gradualist historian.