The Algonquin languages open up a gloriously global can of worms.

Harold Gladwin was particularly interested in the Algonquin languages.

Some of these names may surprise you, particularly those west of the Mississippi, as you have not thought of these people as Algonquin.

But there they are, stretched in a continuous chain across the continent with one end hooked on Cape Cod and the other on Cape Flattery, just south of Vancouver; and the only explanation seems to be that tribes which have been said to be Algonquin because they spoke Algonquin, were contiguous and continuous from Puget Sound to Buzzards Bay, unless, of course, you lean to the idea that Algonquin phonetics are of such a kind that different peoples spontaneously break out into Algonquin when they need to express themselves.

The Algonquian languages are a subfamily of American indigenous languages that include most languages in the Algic language family.

The Algic languages are an indigenous language family of North America.

Cape Flattery is the northwesternmost point of the contiguous United States.

It is in Clallam County, Washington on the Olympic Peninsula, where the Strait of Juan de Fuca joins the Pacific Ocean.

It is also part of the Makah Reservation, and is the northern boundary of the Olympic Coast National Marine Sanctuary.

The Makah are an indigenous people of the Pacific Northwest Coast living in Washington, in the northwestern part of the continental United States.
…
The Makah tribe linguistically belongs to the Southern Nootkan branch of the Wakashan family of languages among North American indigenous peoples.

Wakashan is a family of languages spoken in British Columbia around and on Vancouver Island, and in the northwestern corner of the Olympic Peninsula of Washington state, on the south side of the Strait of Juan de Fuca.
…
In the 1960s, Swadesh also suggested a connection of the Wakashan languages with the Eskimo-Aleut languages. … Sergei Nikolaev has argued in two papers for a systematic relationship between the Nivkh language of Sakhalin island and the Amur river basin and the Algic languages, and a secondary relationship between these two together and the Wakashan languages.

These linguistic connections suggest the landmasses migrated with their indigenous populations aboard as passive [and probably petrified] passengers.

Alaskan mega-fauna [dead and alive] moved northward when the landmasses migrated as the Earth inflated.

Nivkh, Gilyak or Amuric is a small language family, often portrayed as a language isolate, of two or three mutually unintelligible languages spoken by the Nivkh people in Outer Manchuria, in the basin of the Amgun (a tributary of the Amur), along the lower reaches of the Amur itself, and on the northern half of Sakhalin.
…
More recently, Sergei Nikolaev argued in two papers for a systematic relationship between Nivkh and the Algic languages of North America and a more distant relationship between these two together and the Wakashan languages of coastal British Columbia.

The Algonquin linguistic connections also show the Algonquin people expanded into uninhabited land created by the draining of the Western Interior Seaway.

The Western Interior Seaway was a large inland sea that existed during the mid- to late Cretaceous period as well as the very early Paleogene, splitting the continent of North America into two landmasses, Laramidia to the west and Appalachia to the east.

The curved drainage channels around the Plug Hole of the Sea show where the waters of the inland seas swirled down the drain into the Atlantic Basin. 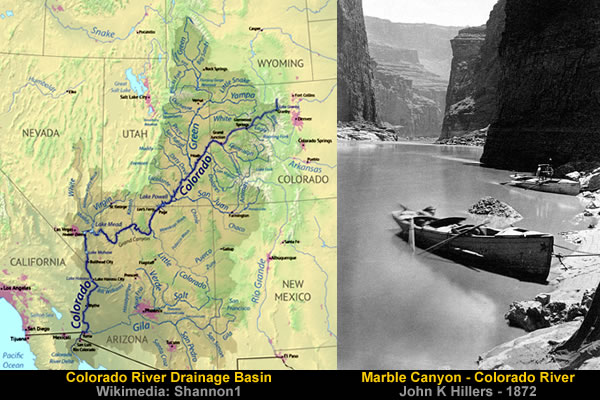 It appears the Hopi moved to higher ground around 900 AD.

Arguably, the move was necessitated by the transformation of the Colorado River from a modest overflow channel into a funnelled flood that [amongst other things] excavated the Grand Canyon as the Western Interior Seaway drained away into the Pacific Ocean.

Harold Gladwin realised cord-marked pottery was produced around the world. 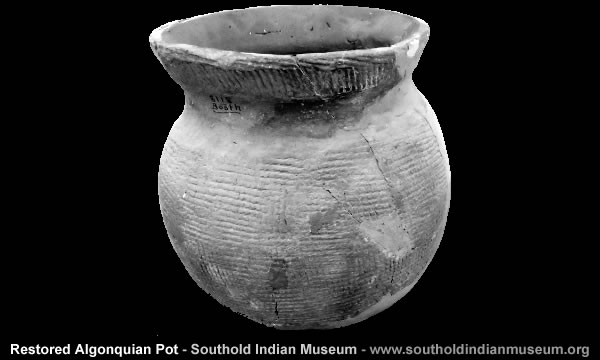 We hope that you have jumped to the conclusion that there was a direct connection between the old and the new, that the modern Algonquin are the descendants of the people who made the cord-marked pottery, or, putting it differently, that cord-marked pottery was an ancient Algonquin product.

Because in this case we have the word of the early colonists that the New England Indians were still making this kind of pottery in the seventeenth century, and there is no doubt about the connection or the continuity of culture so far as New England is concerned.
…
All that is certain is that similar types of pottery, plus the same kind of polished celts, plus other very suggestive traits, have been found in combination from the western coast of France, through Europe, Siberia, China and Japan to North America and the eastern coast of New England.

When the compound reached North America it became known as the woodland culture and later was identified as the product of Algonquin tribes. 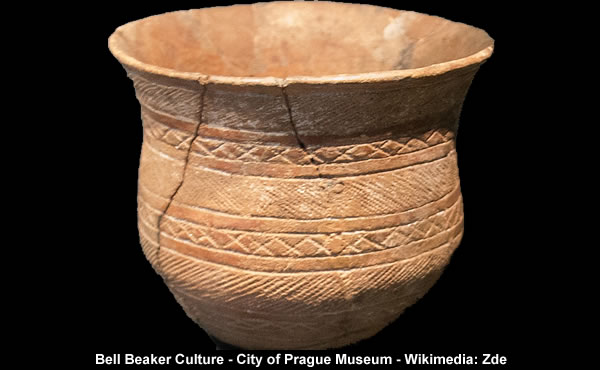 The Bell Beaker culture is an archaeological culture named after the inverted-bell beaker drinking vessel used at the very beginning of the European Bronze Age. Arising from around 2800 BC, it lasted in Britain until as late as 1800 BC but in continental Europe only until 2300 BC, when it was succeeded by the Unetice culture.

The culture was widely dispersed throughout Western Europe, from various regions in Iberia and spots facing northern Africa to the Danubian plains, the islands of Great Britain and Ireland, and also the islands of Sicily and Sardinia. 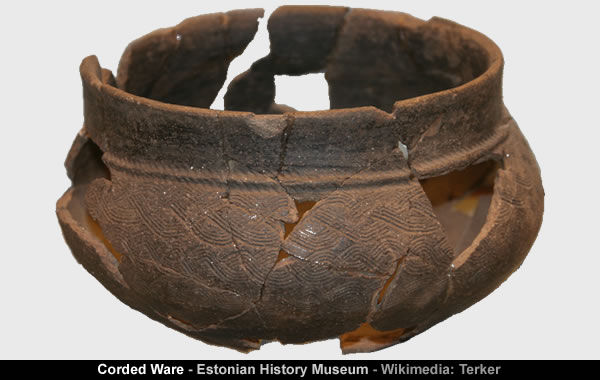 The Corded Ware culture comprises a broad archaeological horizon of Europe between c. 3100 BCE – circa 2350 BCE, thus from the late Neolithic, through the Copper Age, and ending in the early Bronze Age. Corded Ware culture encompassed a vast area, from the Rhine on the west to the Volga in the east, occupying parts of Northern Europe, Central Europe and Eastern Europe. 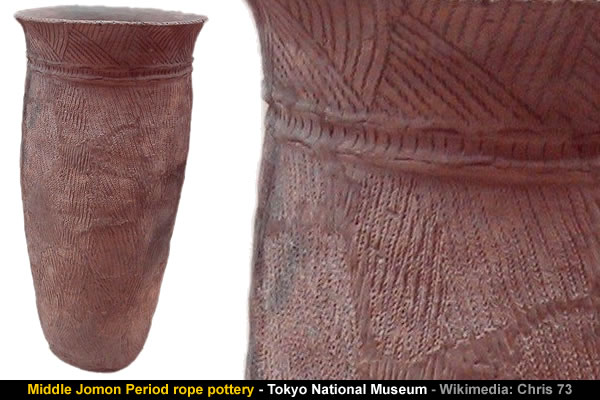 It is also certain that the Algonquin originally came from Asia, and it is therefore simply a question of deciding what to call these people and their culture at various times and at various stages of their travels.

The Jōmon pottery is a type of ancient earthenware pottery which was made during the Jōmon period in Japan.
…
The name Jōmon itself means “rope-patterned”.

This refers to the impressions on the surface of the pottery which were created by pressing rope into the clay before it was heated to approximately 600–900 degrees Celsius.

The DNA evidence suggests the Algonquin are related to Europeans.

The DNA evidence also suggests the ancient ancestors of the Algonquin [and their European relations] originated in Northern India.

The geological evidence suggests the Algonquin are related to Europeans.

Artefacts suggest the Algonquin are related to Bell Beaker Europeans. 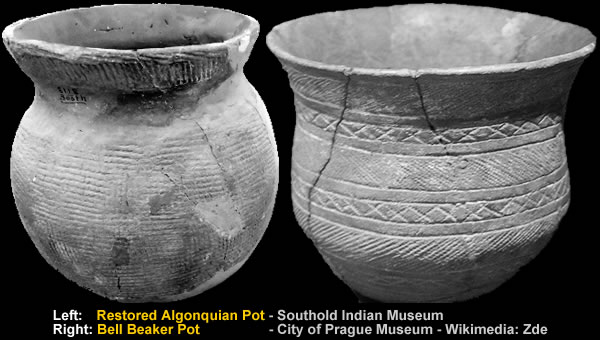 The Bell Beaker culture is an archaeological culture named after the inverted-bell beaker drinking vessel used at the very beginning of the European Bronze Age. Arising from around 2800 BC, it lasted in Britain until as late as 1800 BC but in continental Europe only until 2300 BC, when it was succeeded by the Unetice culture.

The Paris Basin inland sea drained away during the Miocene.

The sedimentary history of the Paris Basin [area 4040 outlined in red – below] tells the same story as it was a component part of the [larger] North European Basin inland sea that drained away into the Atlantic Basin when Britain separated from Europe.

During the Miocene, the current hydrographic network, including the Seine, was established. The basin is then a vast plain barely dominating the sea level. 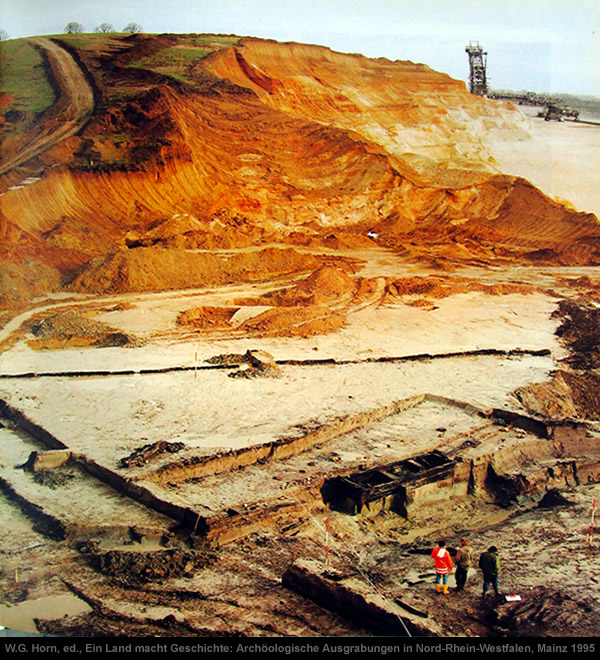 This Roman water works is not buried under colluvium, but under, ahem, Miocene stratigraphy.

The evidence suggests there were numerous European Islands of Culture.

The key to understanding the initial history of the New World in Northern Europe is the re-population of the old landmasses and the population of the newly emerged European Plane by the surviving Islands of Culture.

And a vast number of Islands of Culture dotted across the Old World.

Cord-marked pottery is an early form of a simple earthenware pottery made in precontact villages. It allowed food to be stored and cooked over fire.

Cord-marked pottery varied slightly across the world, depending upon the clay and raw materials that were available.

According to P. N. Oak the “blundering” Academics in Aspic have constructed a false historical narrative that has “forgotten” there was once a Worldwide Vedic Culture.

Review the evidence and draw your own conclusions.