Why The Sky Is Blue

Wikipedia tells us that the sky is blue because air scatters short-wavelength light more than longer wavelengths.

The sunlit sky is blue because air scatters short-wavelength light more than longer wavelengths. Since blue light is at the short wavelength end of the visible spectrum, it is more strongly scattered in the atmosphere than long wavelength red light. The result is that the human eye perceives blue when looking toward parts of the sky other than the sun.

Evidently, Wikipedia has forgotten that Indigo and Violet have shorter wavelengths that blue light.

Evidently, Wikipedia has also forgotten that Indigo and Violet are in the visible spectrum. 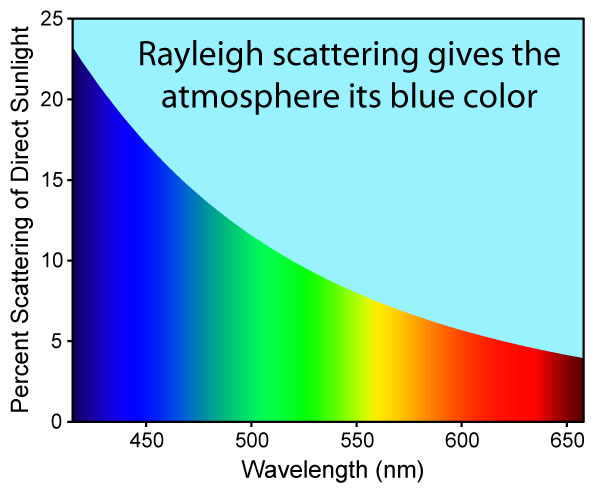 Therefore, if there was any validity in the mainstream hypothesis then the sky should be Violet in colour because Violet has the shortest wavelength in the visible spectrum.

Wikipedia also informs us that we see blue when we look towards the heavens [except when we look directly at the Sun].

The result is that the human eye perceives blue when looking toward parts of the sky other than the sun.

Evidently, Wikipedia has forgotten we can see white clouds in the sky without a hint of a blue tint. 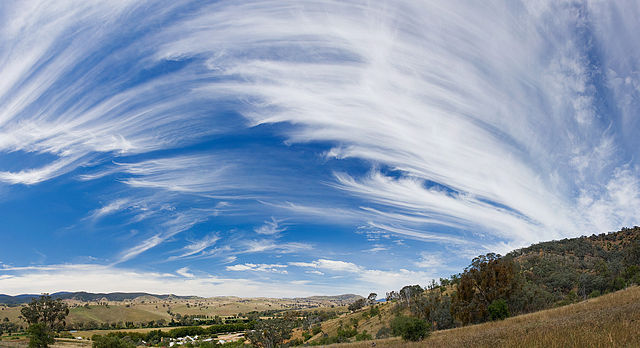 Evidently, Wikipedia has never wondered where all the blue comes from in the spectrum of direct sunlight if the blue light is scattered [in all directions] more than any other colour.

Wikipedia finally tells us that sunrises and sunsets are red because too much blue and green light has been scattered by the atmosphere.

Near sunrise and sunset, most of the light we see comes in nearly tangent to the Earth’s surface, so that the light’s path through the atmosphere is so long that much of the blue and even green light is scattered out, leaving the sun rays and the clouds it illuminates red.

We have already recognised that Wikipedia has a mental block regarding Indigo and Violet so perhaps we will let that pass this time. We should also recognise that when Wikipedia says Red they really mean Red, Orange and Yellow. However, we must also recognise that the Wikipedia folks don’t get out much as night and have never looked at the stars.

However, if the folks from Wikipedia care to step outside on a clear night they should be able to see some stars and [with luck] they might see some stars just above the horizon. Now, if they look carefully they should observe the stars as small points of white light. Not red light. Not orange light. Not yellow light. The stars appear as white light because the Earth’s atmosphere is not magically scattering the blue [and even the green] light. Wikipedia is completely wrong again. The light from stars is not scattered by the Earth’s atmosphere when the stars are close to the horizon [or otherwise] and the same applies to our local star [the sun].

The key to understanding our blue skies was articulated by the late [and great] Ralph Rene when he realised that the Earth’s atmosphere fluoresces. 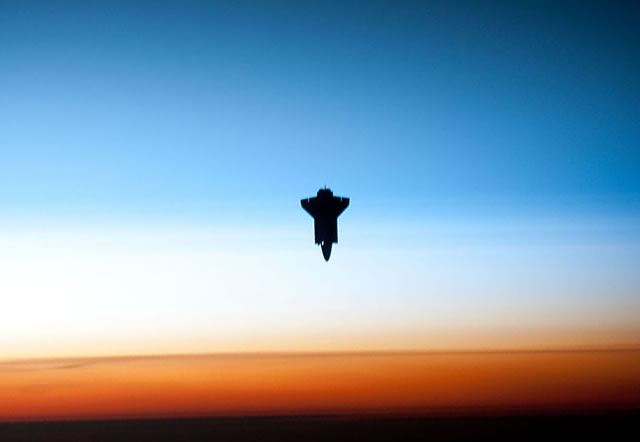 Though astronauts and cosmonauts often encounter striking scenes of Earth’s limb, this unique image, part of a series over Earth’s colorful horizon, has the added feature of a silhouette of the space shuttle Endeavour.

The image was photographed by an Expedition 22 crew member prior to STS-130 rendezvous and docking operations with the International Space Station.
Docking occurred at 11:06 p.m. (CST) on Feb. 9, 2010. The orbital outpost was at 46.9 south latitude and 80.5 west longitude, over the South Pacific Ocean off the coast of southern Chile, with an altitude of 183 nautical miles when the image was recorded.

The orange layer is the troposphere, where all of the weather and clouds which we typically watch and experience are generated and contained. This orange layer gives way to the whitish Stratosphere and then into the Mesosphere.

Ralph Rene’s eureka moment arrived in 1990 whilst he was driving in Florida.
Looking at the sky he realised that the light sky blue at the horizon slowly deepened with elevation until it became a deep electric blue.

Ralph Rene also realised that a longer atmospheric path [over the horizon] should mean the sky produces more photons compare to the shorter path when looking vertically upwards into the sky. 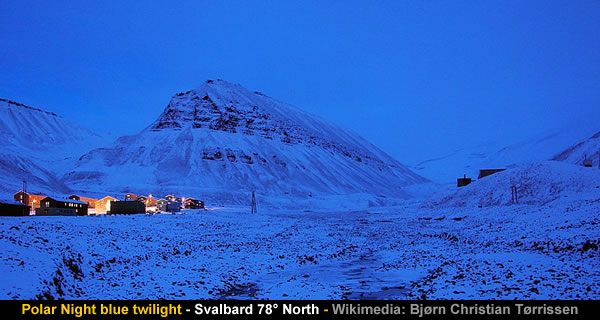 Ralph Rene then used a light meter to test his hypothesis and found [without any shadow of a doubt] that the sky above the horizon is brighter that the sky vertically above the Earth’s surface.

The Blue florescence of the Earth’s atmosphere is clearly highlighted when the spectrum of solar irradiance [received on Earth] is compared to the theoretical blackbody irradiance of the Sun.

Evidently, the Emission Gains in the visible spectrum are driven by the absorption of Ultraviolet light in the Earth’s atmosphere. 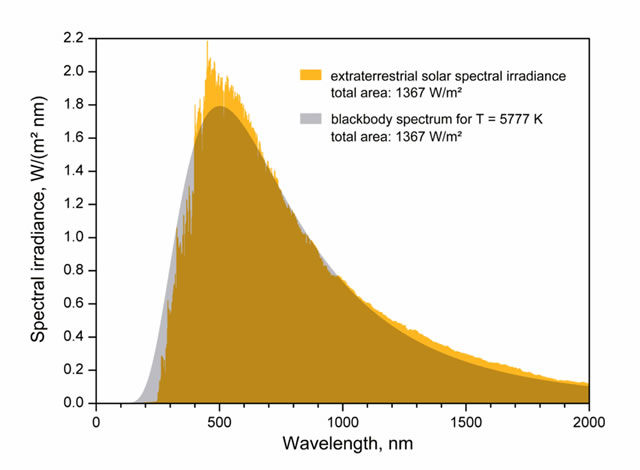 Interestingly, the level of Ultraviolet light received on Earth varies during the solar cycle.

This figure shows the emission intensity of ultraviolet (UV) during cycle 22 and 23.
http://www.boards.ie/vbulletin/showthread.php?t=2056803618

These variations in Ultraviolet light changes the florescence of the atmosphere and these changes are incorporated into the observations of the Earth’s Albedo and the Earthshine [blue line – below]. 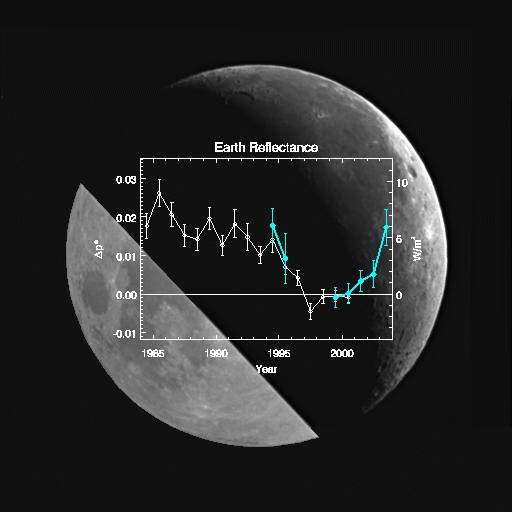 Variations of the earth’s reflectance, a key climate parameter, can be monitored by measuring the brightness ratio of the dark and bright side of the Moon.
Image credit: Earthshine Project, BBSO.

There are many gases in the Earth’s atmosphere that are florescent but in the upper atmosphere there are two gases that dominate: Hydrogen and Helium.

Interestingly, Hydrogen and Helium emit the main colours seen in the sky: Blue, Yellow and Red.
Also, these two gases do not emit Green light [which explains why Green is never seen in the sky].

Handbook of Geophysics and the Space Environment, 1985
http://www.cnofs.org/Handbook_of_Geophysics_1985/

The variability of colours during sunsets and sunrises is probably determined by the levels of water vapour, hydroxyl and other molecules in the atmosphere because these molecules must be photo-disassociated [by ultraviolet light] before the atmospheric ionization process [which drives the florescence of atmosphere through electron collisions] becomes fully “charged”.

Below is an animation of how the blue line of hydrogen is made.

The electron is excited into the fourth state by a collision with another electron, then it goes back down to the second state and emits the turquoise photon. Then it quickly returns to the ground state, emitting a UV photon which our eyes are not sensitive to. Other lines come from other transitions. Each element has a different set of energy levels, so it absorbs and emits different photons and thus has different lines.

The Balmer series or Balmer lines in atomic physics, is the designation of one of a set of six different named series describing the spectral line emissions of the hydrogen atom. The Balmer series is calculated using the Balmer formula, an empirical equation discovered by Johann Balmer in 1885.

The visible spectrum of light from hydrogen displays four wavelengths, 410 nm, 434 nm, 486 nm, and 656 nm, that correspond to emissions of photons by electrons in excited states transitioning to the quantum level described by the principal quantum number n equals 2.

There are also a number of ultraviolet Balmer lines with wavelengths shorter than 400 nm.

Aeronomy of the Middle Atmosphere:
Chemistry and Physics of the Stratosphere and Mesosphere
http://books.google.es/books?id=HoV1VNFJwVwC

Physics of the earth in space: the role of ground-based research – 1969
http://books.google.es/books?id=CD0rAAAAYAAJ&pg=PA142&lpg=PA142 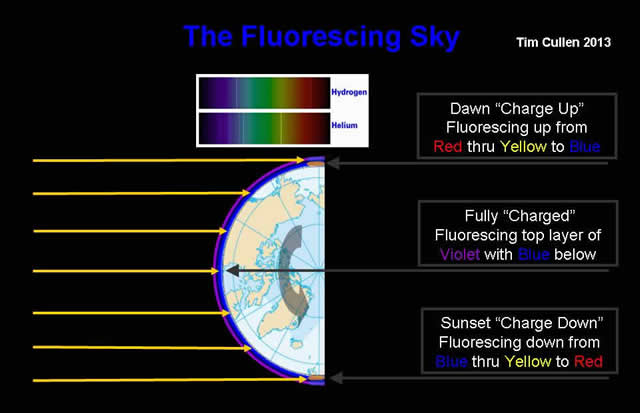 However, if you are not convinced about Hydrogen and Helium then there are other gases in the atmosphere that glow and ionised-air glow provides an electric blue emission.

The ionized-air glow is the emission of characteristic blue–purple–violet light, of color called electric blue, by air subjected to an energy flux.
…
In dry air, the color of produced light (e.g. by lightning) is dominated by the emission lines of nitrogen, yielding the spectrum with primarily blue emission lines. The lines of neutral nitrogen (NI), neutral oxygen (OI), singly ionized nitrogen (NII) and singly ionized oxygen (OII) are the most prominent features of a lightning emission spectrum.

Violet hue can occur when the spectrum contains emission lines of atomic hydrogen. This may happen when the air contains high amount of water, e.g. with lightnings in low altitudes passing through rain thunderstorms. Water vapor and small water droplets ionize and dissociate easier than large droplets, therefore have higher impact on color.

The hydrogen emission lines at 656.3 nm (the strong H-alpha line) and at 486.1 nm (H-beta) are characteristic for lightnings.

Rydberg atoms, generated by low-frequency lightnings, emit at red to orange color and can give the lightning a yellowish to greenish tint.

Generally, the radiant species present in atmospheric plasma are N2, N2+, O2, NO (in dry air) and OH (in humid air). The temperature, electron density, and electron temperature of the plasma can be inferred from the distribution of rotational lines of these species. At higher temperatures, atomic emission lines of N and O, and (in presence of water) H, are present. Other molecular lines, e.g. CO and CN, mark presence of contaminants in the air. 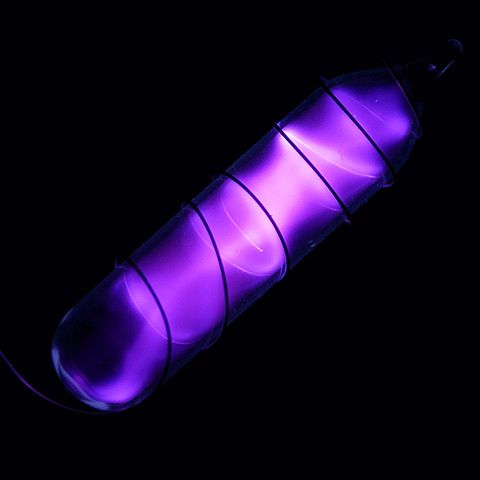 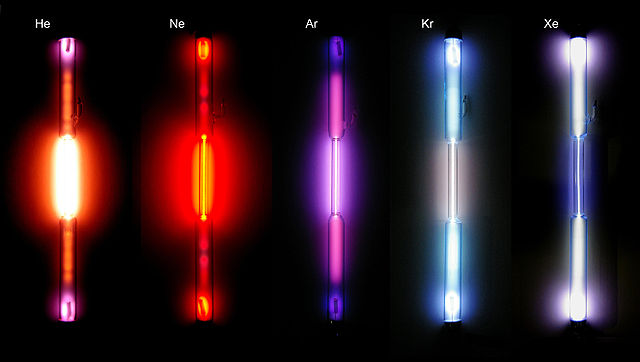 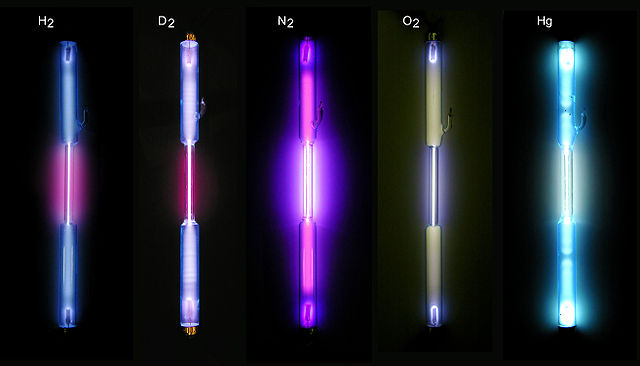 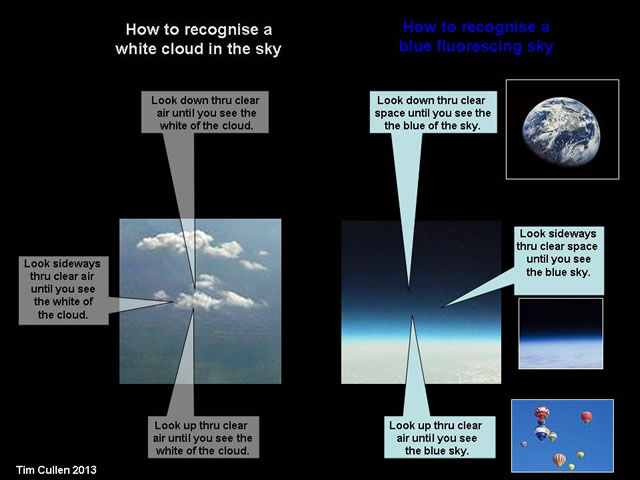 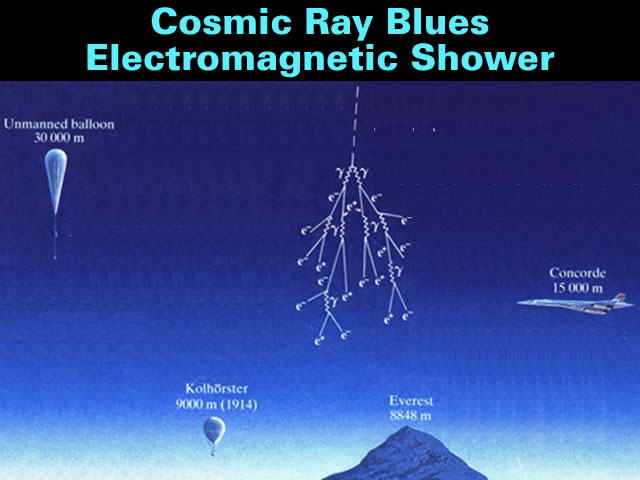 The Fluorescing Sky of Earth
https://malagabay.wordpress.com/2013/04/27/the-fluorescing-sky/

The Mystery of the Mariner 2 Photometry
https://malagabay.wordpress.com/2013/05/02/the-mystery-of-the-mariner-2-photometry/ 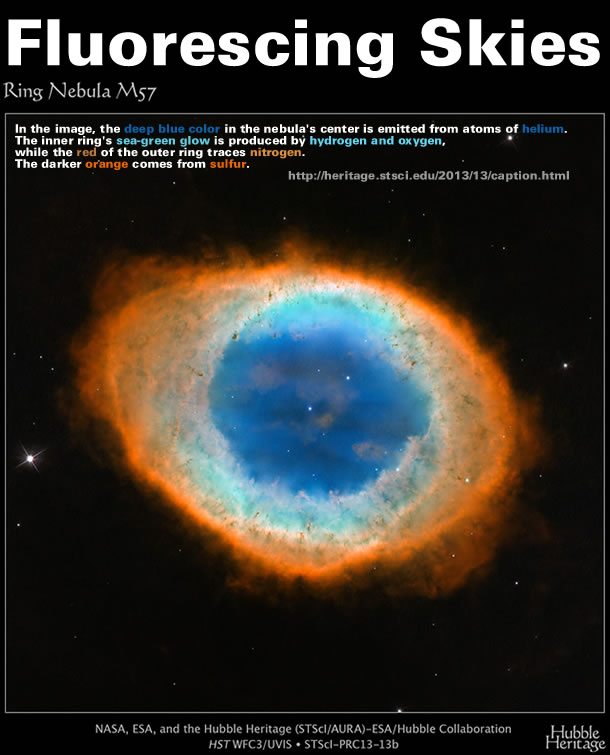 10 Responses to Why The Sky Is Blue