During my research into the Liesegang Phenomena I stumbled across a reference to D’Arcy Wentworth Thompson’s “On Growth and Form”.

This is not unusual because I frequently encounter references to D’Arcy Wentworth Thompson’s famous [“textbook staple”] tome when I’m researching scientific topics.

D’Arcy’s most famous work, On Growth and Form was written in Dundee, mostly in 1915, though wartime shortages and D’Arcy’s many last-minute alterations delayed publication until 1917.

The central theme of On Growth and Form is that biologists of its author’s day overemphasized evolution as the fundamental determinant of the form and structure of living organisms, and underemphasized the roles of physical laws and mechanics.

He advocated structuralism as an alternative to survival of the fittest in governing the form of species.

Thompson had previously criticized Darwinism in his paper Some Difficulties of Darwinism in an 1884 meeting for the British Association for the Advancement of Science.

His book On Growth and Form explained in detail why he believed Darwinism to be an inadequate explanation for the origin of new species. Thompson did not reject natural selection but regarded it as a secondary to the origin of biological form.
…
Thompson pointed out – in example after example – correlations between biological forms and mechanical phenomena.

He showed the similarity in the forms of jellyfish and the forms of drops of liquid falling into viscous fluid, and between the internal supporting structures in the hollow bones of birds and well-known engineering truss designs.

His observations of phyllotaxis (numerical relationships between spiral structures in plants) and the Fibonacci sequence has become a textbook staple.

Perhaps the most famous part of the work is chapter XVII, “The Comparison of Related Forms,” where Thompson explored the degree to which differences in the forms of related animals could be described by means of relatively simple mathematical transformations.

Utterly sui generis, the book has never conformed to the mainstream of biological thought.

It does not really include a single unifying thesis, nor, in many cases, does it attempt to establish a causal relationship between the forms emerging from physics with the comparable forms seen in biology.

It is a work in the “descriptive” tradition; Thompson did not articulate his insights in the form of experimental hypotheses that can be tested.

Thompson was aware of this, saying that “This book of mine has little need of preface, for indeed it is ‘all preface’ from beginning to end.”

This huge (the current Dover edition is 1116pp long), classically composed and extensively illustrated tome has enchanted and stimulated several generations of biologists, architects, artists, mathematicians, and, of course, those working on the boundaries of these disciplines.

There is a shorter (328pp) edition which preserves most of the material that is of interest to the modern reader.

Luckily, I have a [73.5 MB] PDF version of the 1945 edition of “On Growth and Form” [for fact checking] and fairly quickly located the references to Liesegang Rings.

Unfortunately, being an old fart, my preference is to read physical [hard copy] books.

Therefore, I decided to bite the bullet and order a copy from Amazon UK.

However, when I checked the details of the offered paperback [1961 Edition] of “On Growth and Form” I was very startled to notice just how few pages this version of the book contained.

Reducing 1,094 pages of a “textbook staple” down to 327 pages seems to be more of a massacre than an abridgement.

Closer examination of the contents reveals that whole chapters of this “textbook staple” have been simply deleted in the abridged version and it is hard to avoid the conclusion that the mainstream has exacted its revenge on a book that [as Wikipedia states] “has never conformed to the mainstream of biological thought”.

Comparing the “Index” pages of the three versions seems to confirm this conclusion because [for example] “Liesegang’s Rings” and “Light Pressure” have simply disappeared from the 1961 abridged edition. 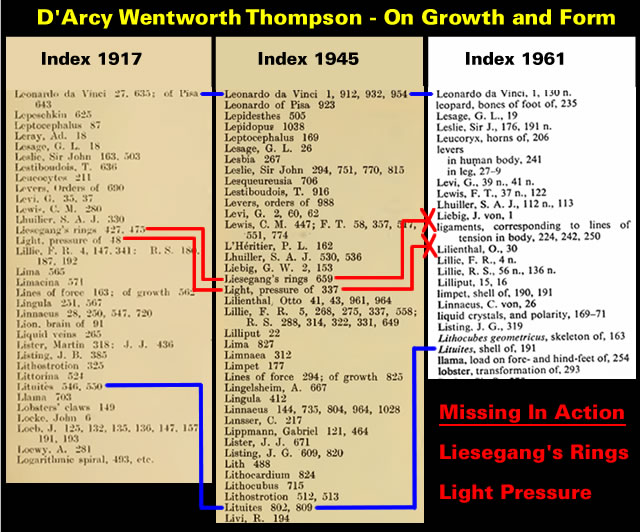 Personally, I find this tampering with an historic “textbook staple” very Orwellian.

Therefore, I ordered an old battered [ex-library] copy of the 1945 edition of “On Growth and Form” and [hopefully] it should now be crossing the English Channel en route to Malaga. 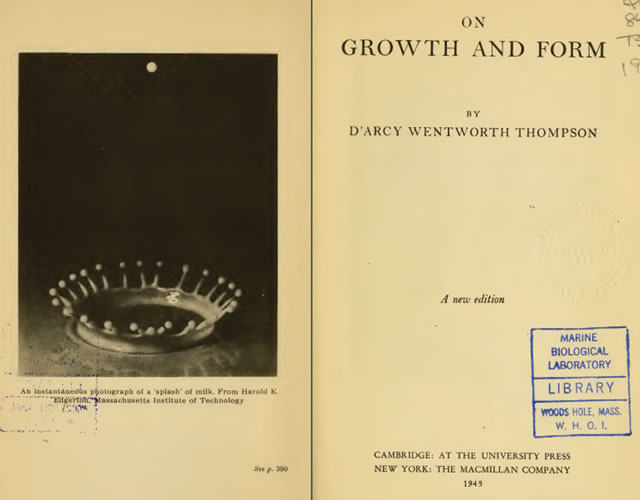 Gallery | This entry was posted in Books, Earth, Science, Vortices. Bookmark the permalink.