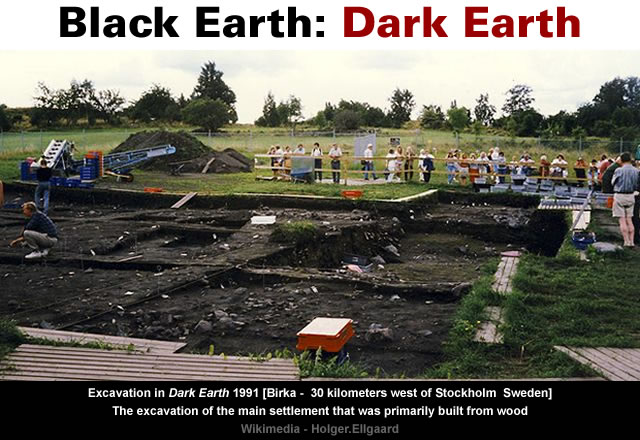 Dark Earth is an extraordinary substance that provokes an allergic reaction in Earth Scientists which results in coughing, fidgeting and incoherent mumbling.

The potency of Dark Earth varies depending upon the specific mix unearthed at a site.

The material is high in organic matter, including charcoal, which gives it its characteristic dark colour; it may also contain fragments of pottery, tile, animal bone and other artefacts.

Vivianite (Fe2+Fe2+2(PO4)2·8H2O) is a hydrated iron phosphate mineral found in a number of geological environments.
…
Vivianite crystals are often found inside fossil shells, such as those of bivalves and gastropods, or attached to fossil bone.
…
Vivianite is a secondary mineral found in a number of geologic environments: The oxidation zone of metal ore deposits, in granite pegmatites containing phosphate minerals, in clays and glauconitic sediments, and in recent alluvial deposits replacing organic material such as peat, lignite, bog iron ores and forest soils (All).

Bones and teeth buried in peat bogs are sometimes replaced by vivianite.

For instance, it appears in Jurassic/lower Cretaceous deposits of greensand, so-called after the coloration caused by glauconite.

It can also be found in sand or clay formations, or in impure limestones and in chalk.

British archaeologists have to endure digging through Dark Earth up to a metre thick.

Dark earth in archaeology is an archaeological horizon, as much as 1 m (2 – 3 ft) thick, indicating settlement over long periods of time.

Whilst their European colleagues wade through Dark Earth up to two metres deep.

In archaeology the term black earth, in use since the 1980s, refers to a layer between 0.6 m to 2 m thick, covering archaeological sites.
…
In England black earth covers Roman remains, especially in urban areas, including London.

In Sweden, an area of 40 hectares of black earth was discovered in Uppåkra (southern Sweden, formerly Denmark), where human settlement and a city existed during the first millennium before the city was moved to Lund.

Seven hectares of black earth were uncovered in the Viking town of Björkö (now called Birka), in central Sweden, near Stockholm.

Black earth were also encountered in Köpingsvik, in the island of Öland off the coast of southern Sweden.

In France, it has been discovered in Bavay, Corseul, Noyon, Tours at multiple sites and in Paris at two sites, to name a few examples amongst many.

Archaeologists have unearthed numerous deposits of Dark Earth in London and have managed to reconstruct the capricious movements of the infamous Dark Earth Fairy.

In Rangoon Street Dark Earth was accumulating “until the 4th Century”.

The site was first occupied in the mid 1st Century AD, and Dark Earth is believed to have accumulated until the 4th Century, after which there is some late Saxon activity concluding with a double inhumation dated 1015 ± 30 AD (David Bowler, pers comm: Bowler, 1983).

In Milk Street Dark Earth was only spread over “mid-second century” Roman ruins.

Some reports suggest Dark Earth caused a “radical transformation” all over London “in the 3rd century” after a successful trial run during “the later 2nd century”.

Therefore the changed nature of the latest buildings, the different character of their decay and disuse, and the alterations to the road system can be put beside the dark earth itself to suggest that, in the 3rd century, all the sites discussed here underwent a similar radical transformation from their previous use, in a way already anticipated in the later 2nd century but which remains otherwise unexplained.

The ‘dark earth’ and the deposits it overlies
It is almost invariably the case that, where the strata survive, the latest Roman levels are sealed by deposits of dark-coloured loam, commonly called ‘dark earth’ (formerly ‘black earth’).

In the London area the ‘dark earth’ generally appears as a dark grey, rather silty loam with various inclusions, especially building material.

The deposit is usually without stratification and homogeneous in appearance. It can be 1 m or more in thickness.

Whilst Wikipedia believes the Dark Earth Fairy was sprinkling her allergenic ingredients over London from “the 2nd to 5th century”.

In England, dark earth covers many areas that were built up in the Roman period, especially Londinium.

In some cases, it may represent open spaces on the edge of urban centres, but can also be found in more rural settings in and around foci of settlement.

In the example of London, deposits underlying the ancient city’s dark earth are often dated to between the 2nd to 5th century, the middle and later Roman period.

Wikipedia also explains [with a straight face] that Dark Earth is a soil enrichment scheme [dreamt up by persons unknown at some point in history] whereby “the sooty remains of thatched roofs from houses without chimneys” [from Scotland] plus some “other waste materials” [including ash, charcoal, pottery, tiles, animal bones, shells, mortar, burned daub, ferro-manganiferous nodules, glauconite…] are pulverised and crushed [on an industrial scale for hundreds of years] before being mixed together with sand, gravel and all the other ingredients so that persons unknown could spread Dark Earth [up to a metre deep] over the ruins of [for example] Roman London because they wanted to grow a crop of vivianite crystals [which they would never harvest].

It is interpreted as soil enriched with the sooty remains of thatched roofs from houses without chimneys, with other waste materials.

In some areas it appears to give the soil added fertility.

To illustrate the reality of this soil enrichment scheme [for Central London] Wikipedia very helpfully provides an image of a thatched blackhouse from the Isle of Skye, Scotland.

There is no chimney on this house and the thatch becomes impregnated with soot.

When the roof is replaced, the waste thatch can add fertility to the soil, resulting in dark earth.

Unsurprisingly, the blackhouse never made its way to England.

A blackhouse is a traditional type of house which used to be common in the Scottish Highlands, the Hebrides, and Ireland.

It’s even debatable whether the thatched blackhouse existed before the 18th century.

Although the Lewis blackhouses have a look of real antiquity, most of the upstanding ruins were built less than 150 years ago.
…
The immediate origins of the blackhouse are unclear as few pre-eighteenth century examples have ever been excavated.

One reason for this is that, unlike their later counterparts, the early examples may have been made of turf and thatch and quickly returned to the earth once abandoned

Furthermore, the evidence from London indicates the city wasn’t repopulated until the 9th century.

Overlying deposits are frequently dated to the 9th century when Saxon London was repopulated and began to expand.

Therefore, it’s probably kindest to consider these mythical people manufacturing Dark Earth [on an industrial scale for centuries] as a figment of the fevered mainstream imagination.

Please be gentle when you break the bad news about the Dark Earth Fairy.