99% of Your Molecules are Water

Settled Science has some very strange fixations about water and mass.

A classic example of these fixations is the headline statement made by Wikipedia that the average male body is “approximately 60% water” by weight.

By weight, the average human adult male is approximately 60% water.

Unfortunately, this headline approximation is fairly meaningless quantitatively because the water content [by weight] of the human body ranges between 42% and 75%.

However, there can be considerable variation in body water percentage based on a number of factors like age, health, weight, and gender.

In a large study of adults of all ages and both sexes, the adult human body averaged ~53% water.

However, this varied substantially by age, sex, and adiposity (amount of fat in body composition).

The figure for water fraction by weight in this sample was found to be 48 ±6% for females and 58 ±8% water for males.

The body water constitutes as much as 75% of the body weight of a newborn infant, whereas some obese people are as little as 45% water by weight.

However, this headline approximation is also fairly meaningless qualitatively because the various atoms and molecules found in the human body are not of equal mass.

The elemental composition of the human body can be looked at from the point of view of either mass composition, or atomic composition.

To illustrate both views, the adult male human body is approximately 57% water, and water is 11% hydrogen by mass but 67% hydrogen by atomic percent.

Only about 0.85% is composed of another five elements: potassium, sulfur, sodium, chlorine, and magnesium. All are necessary to life.

The remaining elements are trace elements, of which more than a dozen are thought to be necessary for life, or play a role in good health (e.g., fluorine, which hardens dental enamel but seems to have no other function).

However, even quantifying the atomic composition of the human body is fairly meaningless qualitatively because these reactive elements are bound to other elements to form stable molecules.

Presumably, this curious charade of mainstream misdirection is undertaken so that the casual reader doesn’t realise that 99% of molecules in the human body are water.

The presentation is well worth watching because Dr Gerald Pollack addresses a number of interesting questions: 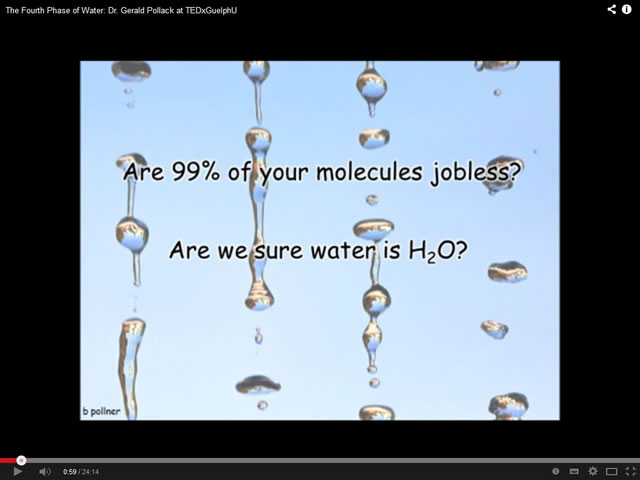 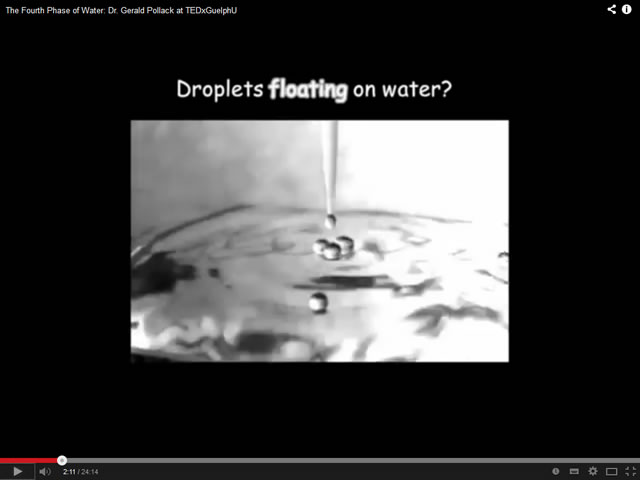 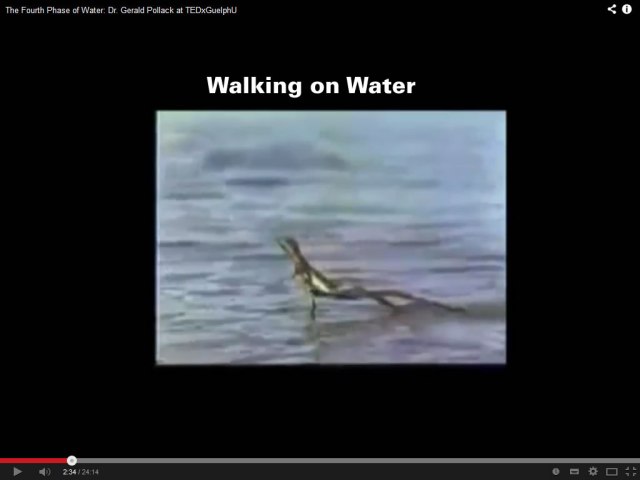 Gallery | This entry was posted in Gerald Pollack, Science, Water. Bookmark the permalink.

7 Responses to 99% of Your Molecules are Water