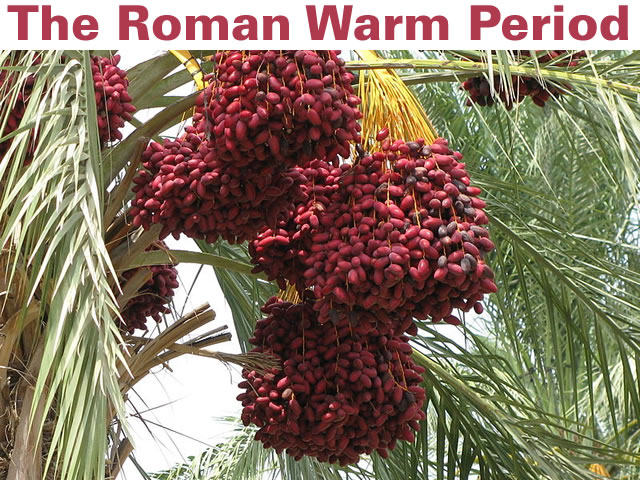 The Roman Warm Period or the Roman climatic optimum has been proposed as a period of unusually warm weather in Europe and the North Atlantic that ran from approximately 250 BC to 400 AD.
…
The phrase “Roman Warm Period” appears in a 1995 doctoral thesis.

It was popularized by an article published in Nature in 1999.

Theophrastus [apparently] wasn’t impressed with the Roman Warm Period either.

Theophrastus (371 – c. 287 BC) wrote that date trees could grow in Greece if planted, but could not set fruit there.

This was probably because he died before the Roman Warm Period began in 250 BC.

Wikipedia tells us the southern Aegean was about “the same situation as today”.

This is the same situation as today, and suggests that southern Aegean mean summer temperatures in the fourth and fifth centuries BC were within a degree of modern temperatures.

This and other literary fragments from the time confirm that the Greek climate during that period was basically the same as it was around 2000 AD.

Dendrochronological evidence from wood found at the Parthenon shows variability of climate in the 5th century BC resembling the modern pattern of variation.

But the “fourth and fifth centuries BC” were before the Roman Warm Period.

Therefore, to avoid any misunderstanding, let’s consult a quoted reference.

Before the Roman Warm Period the climate was basically the same as it is today.

Dendrochronological evidence from the Parthenon in Athens provides evidence for a pattern of climatic variability in the fifth century BC which resembles the modern pattern.

The fragments of information available in ancient literary sources confirm that the climate of Greece was basically the same in the fifth and fourth centuries BC as it is today.

The statement of Theophrastus, the founder of plant biogeography, that date palm trees could grow in Greece, if planted, but could not set fruit there, matches the situation today.

It indicates that mean temperatures in the summer months in the southern Aegean circa 300 BC were within a degree of the modern values.

The Roman Warm Period peaked around 150 AD at 2° C warmer than today.

Going back to antiquity, this record indicates a Roman Warm Period peaking at about AD 150.

These conclusions are probably somewhat exaggerated.

Nevertheless the reality of the Roman Warm Period can be corroborated by various types of proxy data, for instance the spread of viticulture into Roman Britain as demonstrated by recent archaeological finds at Wollaston in the Nene Valley in Northamptonshire.

In the vicinity of the Roman city of Sagalassos in south western Anatolia not only olive pollen (which can be blown considerable distances by the wind) but also olive presses and olive wood have been found in areas where it is too cold for the olive tree to survive there today.

It has been suggested that this indicates that average temperatures were 2–3° C higher than they are today.

In other words: Climate Change is a natural process.

UPDATE 19 Nov 2015
According to an Old Japanese Cedar the Roman Warm Period was not limited to Europe and the North Atlantic.

The isotopic information Libby extracted from an Old Japanese Cedar indicated that temperatures have fallen by about 1.5 °C in the last 1,800 years.

5 Responses to The Roman Warm Period