This posting focuses upon on the origins and associations of the Round Towers of Ireland that William Betham determined were “sepulchral mausolea, like those of India and Italy”

Cremation, so far as history informs us, never obtained as a mode of sepulture among Christians, therefore, urns and burned bones being found buried within the tower of Timahoe, demonstrates an earlier period for the erection of the Round Towers.
…
It is scarcely necessary to apply this evidence, or to sum up what has been adduced, in order to satisfy the most incredulous, that the round towers were sepulchral mausolea, like those of India and Italy, erected for the deposit of the bodies of eminent individuals, most likely of the spiritual hieorophants of the Celtae.

Very specifically, William Betham was struck by the architectural similarities between the Round Towers of Ardmore and the Indian Towers of Boglipoor. 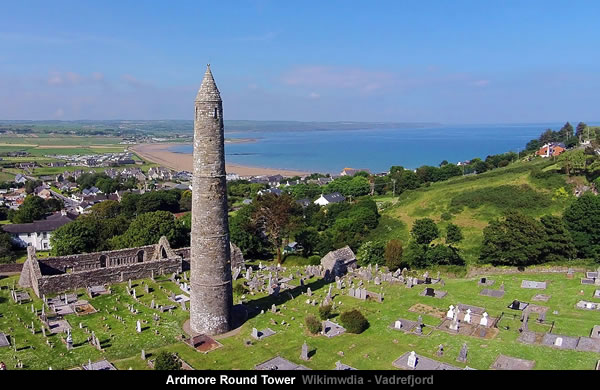 This is the only tower in Ireland (at least I believe so) which has the projecting bands, in which it resembles much the Indian Towers of Boglipoor. (See plates.) 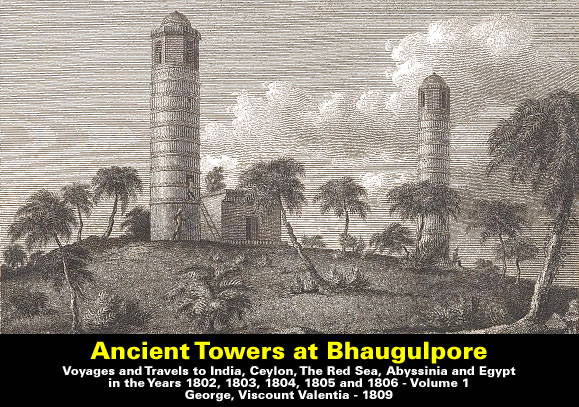 Bhagalpur is a city and a municipal corporation situated on the southern bank of the Ganges in the Indian state of Bihar.

This connection with India was also recognised by Henry O’Brien.

He finds that Fiadh-Nemeadth in all preceding writers on the subject is held to apply specifically to the round towers, though some of these writers (e,g, Colgan and O’Connor) have wrested its meaning to support their own particular views, and the true import of this term he subsequently explains to be “consecrated Lingams”, or phallic temples.

From a careful study of Eastern records and Sabaism, the author is led to take up the position that the round towers were constructed by early Indian colonists of Ireland (the Tuath-de-danaans), in honour of ” the fructifying principle of nature,” of which the sun and moon are representative.
…
The duration of Tuath-de-danaan supremacy may have been some six centuries, dating from the first battle of Moytura, in B.C. 1202, to the second battle, in or about B.C. 600,

The religion of the Vedic period (also known as Vedism, ancient Hinduism, Brahmanism and Vedic Brahmanism) was the religion of the Indo-Aryans of northern India.
…
The Vedic liturgy is conserved in the mantra portion of the four Vedas, which are compiled in Sanskrit.
…
The complex Vedic rituals of Śrauta continue in coastal Andhra.
…
The commonly proposed period of earlier Vedic age is dated back to 2nd millennium BCE.
…
The Vedic period is held to have ended around 500 BC.

The period after the Vedic religion, between 800 BCE and 200 BCE, is the formative period for Hinduism, Jainism and Buddhism.

Many traits of Zoroastrianism can be traced back to the culture and beliefs of the prehistorical Indo-Iranian period, that is, to the time before the migrations that led to the Indo-Aryans and Iranics becoming distinct peoples.

Zoroastrianism consequently shares elements with the historical Vedic religion that also has its origins in that era.

A Tower of Silence is a circular, raised structure used by Zoroastrians for exposure of the dead, particularly to scavenging birds for the purposes of excarnation.

William Betham significantly broadened the scope of these architectural connections by recognising that Towers and Tumuli are common features in “countries occupied by the Druids and the Buddhists”.

In the countries occupied by the Druids and the Buddhists are found buildings and tumuli of singular and extraordinary construction, so exactly similar to each other, and so very peculiar and striking, that a common cause for their construction in each country, almost forces itself on the mind ; it is scarcely possible that effects so very peculiar could have originated from different causes.

These Indian towers, like the Irish, are circular ; they are both solitary buildings, with an entrance elevated from eight to twelve feet from the ground ; they each have small apertures for the admission of light, at regular distances from the elevation, with four apertures near the top, at the four cardinal points, and each are covered with a round or conical top.

The Buddhist writings declare that they were built over the bones or reliques of their saints, or to commemorate some act of their incarnate Buddho.

In the tower of Timahoe, an urn was found, which contained human bones.

In India are abundance of dagobas, or mausolea of dome like masess, covering the body of a deceased Buddho, solid, save the chamber, where the body was deposited.

In Ireland we have conical hills, as New Grange, Killeavy, Dowth, Ratoath, Cloncurry, of exactly the same character.

Dowth (Irish: Dubhadh) is a Neolithic passage tomb located in the Boyne Valley, County Meath, Ireland that dates from about 2,500 – 2000 BC.

Newgrange (Irish: Sí an Bhrú) is a prehistoric monument in County Meath, Ireland, located about one kilometre north of the River Boyne.
…
Excavations have revealed deposits of both burnt and unburnt human bone in the passage, indicating human corpses were indeed placed within it, some of which had been cremated.

Buddhism or Buddhadharma is a religion and Dharma [dubious – discuss] that encompasses a variety of traditions, beliefs and spiritual practices largely based on teachings attributed to Gautama Buddha, commonly known as the Buddha (“the awakened one”).

According to Buddhist tradition, the Buddha lived and taught in the northern part of the Indian subcontinent, sometime between the 6th and 4th centuries BCE in ancient Magadha kingdom. 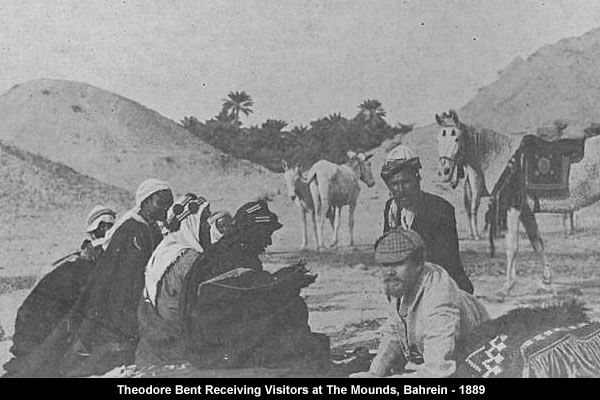 However, there are other architectural connections with many religions/cultures that suggest Ireland “was, during the Bronze Age, a kind of western El Dorado, owing to her great richness in gold”.

This, however, is certain – Ireland during the Bronze Age was not isolated, but stood in direct communication with the Continent, Aegean and Scandinavian influences can be detected in the great tumuli of the New Grange group ; and Iberian influence is discernible in some of the later types of bronze implements.

Ireland, as will be shown in the chapters dealing directly with the gold objects, was, during the Bronze Age, a kind of western El Dorado, owing to her great richness in gold ; Irish gold ornaments have been found both on the Continent and in Scandinavia ; while Scandinavian amber has been found in Ireland.

There is an international consecrated lingams thread which appears to evolve into stylised lingams. 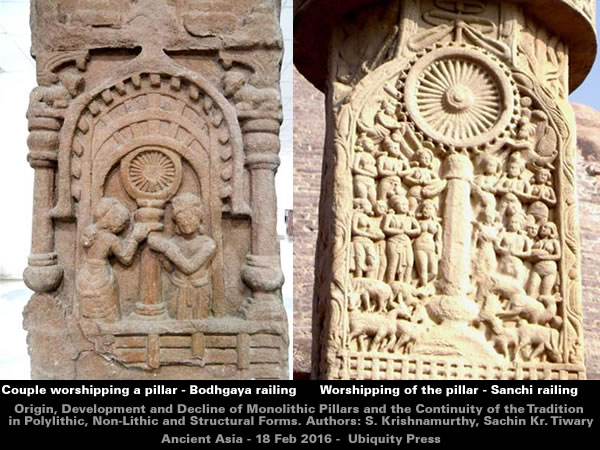 There is also an international thread where burial mounds which appears to evolve towards flat top mounds. 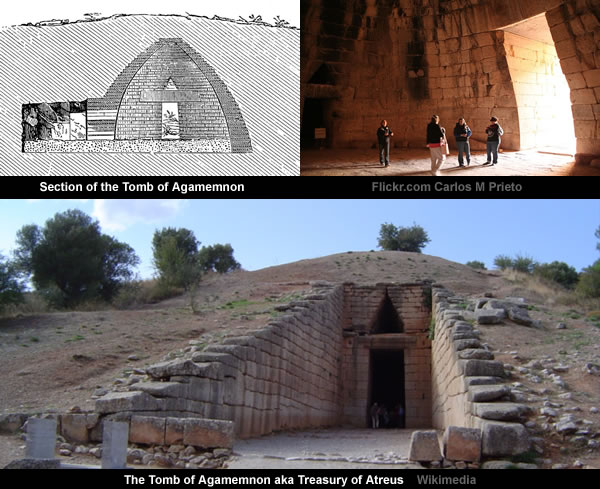 The Treasury of Atreus or Tomb of Agamemnon is an impressive “tholos” tomb on the Panagitsa Hill at Mycenae, Greece, constructed during the Bronze Age around 1250 BC.

The ancient people of Etruria are labelled Etruscans, and their complex culture was centered on numerous city-states that rose during the Villanovan period in the ninth century BC and were very powerful during the Orientalizing Archaic periods.

The Etruscans were a dominant culture in Italy by 650 BC, surpassing other ancient Italic peoples such as the Ligures, and their influence may be seen beyond Etruria’s confines in the Po River Valley and Latium, as well as in Campania and through their contact with the Greek colonies in Southern Italy (including Sicily).

Madghacen or Medracen or Medghassen or Madghis also spelled Imadghassen (correct berber spelling imedghasen), is a royal mausoleum-temple of the Berber Numidian Kings which stands near Batna city in Aurasius Mons in Numidia – Algeria.
…
Madghis was a king of independent kingdoms of the Numidia, between 300 to 200 BC Near the time of neighbor King Masinissa and their earliest Roman contacts.

Knowth is a Neolithic passage grave and an ancient monument of Brú na Bóinne in Ireland’s valley of the River Boyne.

These platform mounds are usually four-sided truncated pyramids, steeply sided, with steps built of wooden logs ascending one side of the earthworks.

When European first arrived in North America, the peoples of the Mississippian culture were still using and building platform mounds.
https://en.wikipedia.org/wiki/Platform_mound

These international connections that link India to the Americas [via Europe and the Middle East] are well illustrated by the Hopi people.

The Ancestral Puebloan culture is perhaps best known for the stone and earth dwellings built along cliff walls, particularly during the Pueblo II and Pueblo III eras, from about 900 to 1350CE in total.

Hovenweep National Monument is located on land in southwestern Colorado and southeastern Utah, between Cortez, Colorado and Blanding, Utah on the Cajon Mesa of the Great Sage Plain.

Archaeological and cultural evidence leads scientists to believe people from this region migrated south to live with the Hopi of Arizona and the puebloan people of the Rio Grande in New Mexico.

The name Hopi is a shortened form of their autonym, Hopituh Shi-nu-mu (“The Peaceful People” or “Peaceful Little Ones”).
…
Hopi is a concept deeply rooted in the culture’s religion, spirituality, and its view of morality and ethics.

To be Hopi is to strive toward this concept, which involves a state of total reverence and respect for all things, to be at peace with these things, and to live in accordance with the instructions of Maasaw, the Creator or Caretaker of Earth.

The Hopi observe their traditional ceremonies for the benefit of the entire world.
…
The Hopi and the Navajo did not have a conception of land being bounded and divided.

Jainism, traditionally known as Jain dharma, is an ancient Indian religion that prescribes the path of ahimsā (non-violence) towards all living beings.
…
Non-injury (ahiṃsā) and self-control are said to be the means to liberation.
…
The three main teachings of Jainism are: Ahimsā, Anekantavada (non-absolutism or multiplicity of viewpoints) and Aparigraha (non-attachment to possessions). 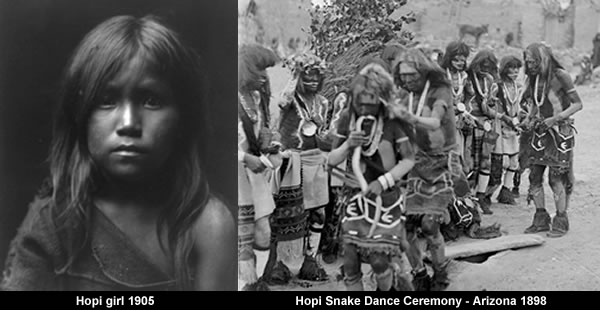 The only problem is most of these Vedic connections don’t fit the Settled History narrative.

This entry was posted in Books, Catastrophism, History, Inflating Earth, Round Towers. Bookmark the permalink.