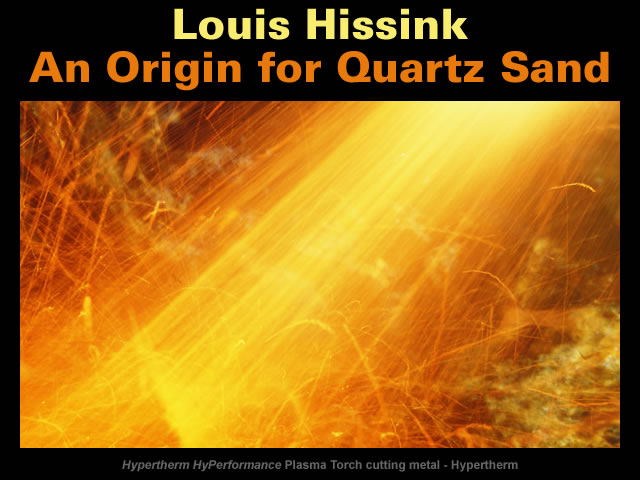 One of the more puzzling geological problems is explaining the origin of quartz sand and its solidified product, sandstone.

Mainstream understanding of the problem is hampered by the belief that most sedimentary deposition occurs in aqueous environments: creeks, rivers, lakes, swamps, beaches, seas and oceans; Another large depositional environment is the Earth’s desert surfaces where there is a thick cover of predominately semi-mobilised quartz sand. One unique physical property of these sand deposits are the various internal structures such as cross-bedding, graded-bedding, etc., all products of hydrodynamic flow regimes, whether gaseous or liquid. In short quartz sand is believed to be the result of prolonged communinution of original igneous formed quartz crystals in either fluvial or aeolian environments.

The overarching concept of the ‘geological cycle’ imagines sedimentary rocks being formed as one of many steps of the sequential earth processes of erosion, transport, deposition, burial, metamorphism, partial melting, and finally uplift of the rocks comprising the crust when the cycle recommences; the Huttonian cycle. This cycle can be interrupted by frequent volcanic eruptions and outflow of lavas, with the more mobile gaseous phases as airborne clouds of tuffs and other ejecta transported by atmospheric winds. The span of time for these processes is based on present day observed rates of uplift, erosion, transport and deposition, and is imagined to be vast. It is imagined that the Earth’s crust is thus slowly recycled over long periods of geological time involving spans of billions of years. The forces necessary for this cycle are strictly endogenous with no recourse to exogenous or ‘divine interventions’ permitted. 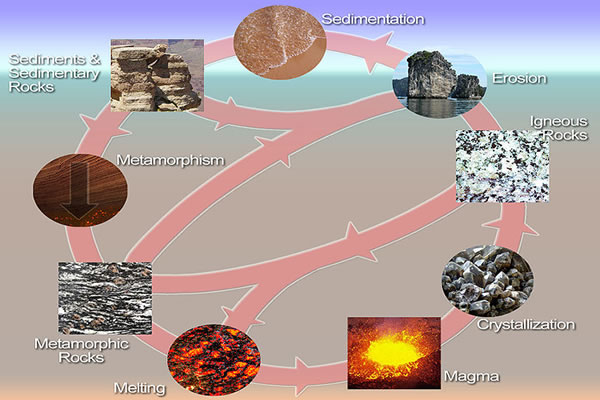 It is tacitly assumed quartz sand is produced by the slow grinding of angular quartz crystals into approximate spherical shapes by impact processes, such as imagined to happen in migrating sand dunes where discrete grains ‘saltate’ or move by short hops in the direction of the driving wind, bumping into each other and, with time, the Lyellian factor, slowly grinding themselves into smaller spheres. That is, dune movement itself generates the sands.

What happens to the quartz dust produced by the impacts from the larger grains is not described, however, but the volume has to be considerable considering the size of the source igneous quartz crystals in the first place.

Alternatively the accumulation of sands along beaches and in riverine systems, including distal depositions of deltas in the river’s mouths in seas and oceans, are imagined to be due to a similar process, this time in the more viscous medium of water, but where the grinding process is minimised by the cushioning effect of water between the colliding grains of sand; this is somewhat similar to the autogenous grinding process used in metallurgical processing of mineral ore in crushing machines where size reduction of particulates is achieved by the grinding action of a slurry composed of heterogeneously sized ore particles without the addition of specific grinding media such as iron balls, for example.

Except that, apart from turbidity flows off the continental shelves into the deeper ocean basins, this process is not observed in Nature.

It is also assumed that quartz sand is derived from the weathering and breakdown of granitic rocks that have a significant proportion of the mineral quartz as one of their constituents; (granitic includes gneisses and any other igneous rock with crystalline quartz as a stable phase).

So the theory goes, cycle wise, except that there are problems.

Take the Sahara Desert, the largest deposit of surficial sand on the planet. Where did the sand come from? No one seems to know. Was all this sand derived from the weathering and erosion of the northern African granitic terrain? And pertinently, which granitic terrain? Or were the sands produced by volcanic action? Ejection of quartz sand has not been observed, however, and the additional problem with highly silicious magmas is that they are very viscous so that disintegration into uncountable small grains or particles is unlikely.

There’s another problem as well – surplus silicon (SiO2) produced from the fabrication of spherical shapes from rhomboids of fresh quartz crystals by impactive mechanisms. And for that matter how were those quartz grains released from the host rock? By chemical weathering? If so is any quartz dissolved into the rainwater causing the chemical weathering? If so then where is that dissolved silicate deposited? Or is it taken up in clay, a complex alumino-silicate? No one seems to know.

Weathered granite, common in Western Australia, can be quite thick but drilling through these zones does not yield any sand but a thick overburden of clays and minor quartz grains; Occasionally vein quartz seems to survive the weathering process, so simple chemical weathering of granitic rocks does not necessarily release angular quartz grains suitable for the subsequent fluviatile transport part of the geological cycle to ultimately form sandstones.

Rather it seems that the original quartz was transformed into the observed clays.

Having spent most of my professional life in the diamond exploration business, experience gained sampling sand choked drainages resulted in serious questioning of the received geological wisdom concerning sediment formation. Strangely, the sand in these channels do not, in bulk, move downstream as we are led to believe.

In fact in-situ experimentation of sediment load composition and transport, when I worked for De Beers in Australia, showed that sediment transport in these drainages is limited to the active thin surface layer, with minor movement of the sand trapped between channel bedrock high points occurring, if at all.

One problem was explaining how diamond indicator minerals ‘jumped’ from trapsite to trapsite; it remains unresolved though from Gerry Pollack’s work with EZ water, scope finally exists for an explanation, so it seems that the dominant fluid mechanism was that of surface laminar flow, and thus quite compatible with EZ water properties. Additionally the lag gravels on top of the sand choked channels continue to move downstream along the top of the channel sand and do not ‘rattle’ their way down through the sand to the bottom of the channel.

A working hypothesis at the time was that these large linear channel deposits, under flood conditions, might operate as low frequency pulsating jigs, allowing gravitational settling of higher density grains through the water saturated channel sand as they travel over the top of the channel sands downstream to their ultimate depositional sites. This implied that heavy minerals might accumulate at the bottom of the channel sand deposits; this was not observed, however.

Overall the ultimate provenance of the sands in drainage channels and sand dunes on the various ‘desert’ environments remains unsolved in terms of the standard geological cycle model, so what plausible alternatives could be considered?

Any hypothesis needs to be able to explain the presence of the unequivocal hydrodynamic-fluid structures found in the sand deposits. The reason for this is because these internal structures are solely caused by the depositional process itself and hence any novel solution needs to factor this fact into its model.

As mainstream science finds itself stalled in a, probably self-induced, theoretical cul-de-sac, alternative observations need to be considered, and from personal experience over many years of geological field work, recourse to Australian Aboriginal oral history seems a useful approach to adopt.

It is well known that these people attribute the formation of Australia’s surface topography to the action of the mythical Rainbow Serpent, both on a regional and local scale. Cutting to the chase, the Rainbow Serpent is interpreted by me as an historical, planetary sized, electric-plasma discharge between the Earth and some cosmic interloper, the morning star, via the ionosphere, that literally ‘laser’ machined the Earth’s surface. Carving out the Earth’s landscape by enormous electrical discharges will of necessity produce abundant eroded material whose nature will vary depending on the nature of the underlying earth. 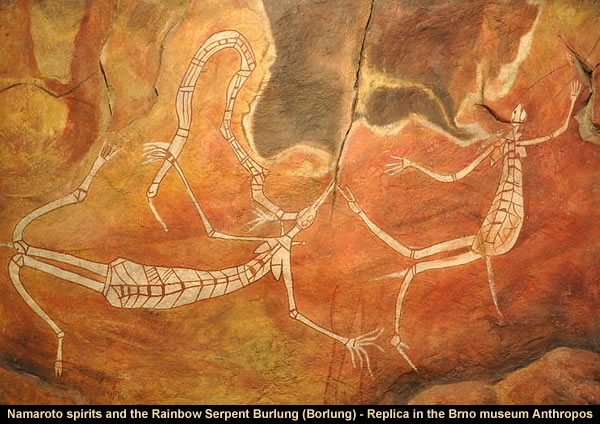 The interesting fact is the very old nature of the West Australian cratons, often covered by thick blankets of regolith or chemically weathered basement and laterites indicative of a previous wet tropical climate. In many areas this regolith has been stripped off by erosion leaving isolated mesas upstream. But if this regolith stripping was caused by the Rainbow Serpent mechanism (RSM), then logically the old land surface would have covered a deeply weathered regolith of clay and minor quartz which when subsequently subject to the impact of a large electric-plasma cutting mechanism would, under the extreme temperatures and Z-Pinch pressures cause partial melting of the clays and formation of droplets of glass or quartz.

That is, quartz sands are produced by the extreme metamorphism via electric-plasma currents of the in situ weathered basement rock regolith; an extreme end point of Bowen’s Reaction Series process as it were. 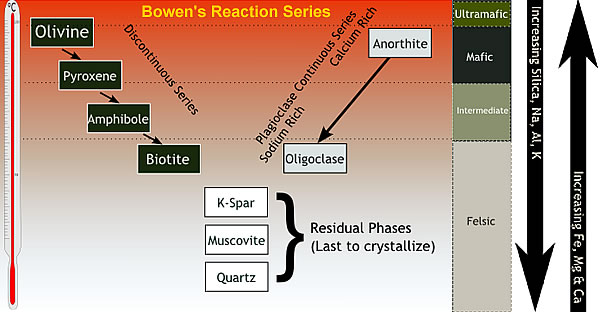 If this model is plausible, then during the active erosional period that might have taken months or some years, the Earth’s surface would have been dominated by boiling and roiling bodies of water, and mobile lateral winds of active, electrically charged viscous clouds or plasma-turbidites of sand sized, spherical droplets of silicon formed by uncountable micro Birkeland currents as the RSM slowly excavated the Earth’s deep regoliths. (The assumption here is that the Earth was originally much smaller and dominated by a global tropical climate, (see Saturn Configuration descriptions elsewhere)).

These plasma-turbidites would have been similar in gross physical properties to, say, acid tuff eruptions of volcanoes such as Mt. Saint Helens, except that instead of being comprised of the partial melt products of the underlying magma, the plasma-turbidites would have been even more ‘acidic’ in a geological sense, because they are a melt product of a siliceous end product dominated by silicon dioxide, or quartz. The spherical nature of the quartz grains is easily explained as the product of the uncountable silicon rich ejecta formed by micro-meter sized plasma Z-Pinches of the electro-machining process of ‘acid clays’, in which small glass spherules are produced. These would be similar to the larger “Blueberry” spheres observed on the Martian surface that C. J. Ransom also produced by his plasma experiments published elsewhere (Google it).

These electro-sediments would thus accumulate in electrically sympathetic areas as they slowly lost electric charge. It is extremely pertinent to stress that if these plasma-turbidites are predominantly sand sized spheres of quartz, then quartz’s inherent piezoelectric properties would also have a significant effect on the electrical, and thus physical behaviour, of a plasma-turbidite comprised of quartz particles; what effect is not known at this point, but practical experience with anti-static pistols using single crystals of piezoelectric quartz suggests extremely high voltages being produced, augmenting what ever electric charge was introduced by the ionospheric sourced plasma discharges. These electrical forces are not used in mainstream geological analyses of sediment formation.

The Earth’s present surface topography was thus formed by electric-plasma driven physical catastrophic events which eroded the old landscape by excavating and electro-machining the deep regolith of the tropical Jurassic world leaving isolated mesas and plateaus and depositing the ‘metamorphically transformed’ product(s) as unconsolidated sands on the Earth’s surface.

Deposition areas would have been determined by both topographic and electrical factors. What is problematical is the absence of such sands in the various deep ocean basins, while the continental shelves are sand covered.

I have barely touched on the subject with this short article, and clearly a lot more research is needed to flesh out the details of the Rainbow Serpent Sediment Mechanism.

6 Responses to Louis Hissink: An Origin for Quartz Sand