Noah and The Flood 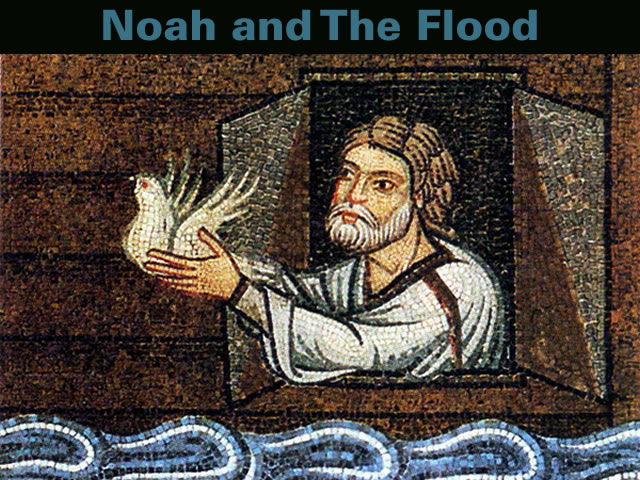 The narrative of Noah, his Ark and The Flood is an ancient story.

In the Abrahamic religions, Noah, was the tenth and last of the pre-flood Patriarchs.

The story of Noah’s Ark is told in the Torah in the Genesis flood narrative.

The biblical account is followed by the story of the Curse of Canaan.

Besides the Book of Genesis, Noah is also mentioned in 1st Chronicles, Tobit, Wisdom, Sirach, Isaiah, Ezekiel, the Gospel of Matthew, the Gospel of Luke, the Epistle to the Hebrews, 1st Peter and 2nd Peter.

He was the subject of much elaboration in the literature of later Abrahamic religions, including the Quran (Sura 71).

Although the date of The Flood is unknown the mainstream believe one of the narrative sources can be traced back to the 10th century BC.

According to the documentary hypothesis, the first five books of the Bible (Pentateuch/Torah), including Genesis, were collated during the 5th century BC from four main sources, which themselves date from no earlier than the 10th century BC.

Two of these, the Jahwist, composed in the 10th century BC, and the Priestly source, from the late 7th century BC, make up the chapters of Genesis which concern Noah.

The attempt by the 5th century editor to accommodate two independent and sometimes conflicting sources accounts for the confusion over such matters as how many of each animal Noah took, and how long the flood lasted.

One of the curiosities in this ancient narrative is the longevity of the pre-flood Patriarchs.

One of the peculiarities of Genesis that gives it a mythical quality is the impossibly large ages attributed to the characters, especially those who lived before the flood.

The oldest of the antediluvians listed in Genesis 5 was Methuselah who has become the epitome of longevity because he was reported to have lived 969 years.

Noah was given an equally incredible age of 950 in Genesis 9:29.

Unsurprisingly, these great ages have generated a great deal of speculation.

The Genesis genealogy numbers have been analyzed by many Biblical commentators, both ancient and modern.

Those who have not rejected the text as mythical, have usually taken the numbers at face value.

Commentators have constructed precise but impossible chronologies with these numbers and others who attempted to rationalize the numbers have encountered difficulties.

For example, changing the word years to months will not produce credible results, because then Mahalalel and Enoch would have been only five years old when they fathered sons.

Robert Best, for example, believes the riddle can be solved by assuming each of the numbers has one decimal place.

To cling to the notion that the Genesis 5 numbers represent hundreds of solar years creates three problems:
how could these men live to be over nine hundred years,
how could they have fathered children when they were over a century old, and
why did they wait so long to have children?

All three of these problems disappear if we make two simple assumptions:
the Septuagint has the original numbers and
each of the numbers has one decimal place.

On the other hand: Errol Hawkins suggests Noah’s age is based upon a Lunar Calendar.

A lunar calendar is a calendar that is based on cycles of the lunar phases.
…
The oldest known lunar calendar was found in Scotland at Warren Field and dates back to around 8,000 BC.

Alexander Marshack, in a controversial reading, believed that marks on a bone baton (c. 25,000 BCE) represented a lunar calendar.

Regardless of the culture, all lunar months approximate the mean length of the synodic month, or how long it takes on average to pass through each phase (new, half, full moon) and back again.

However, the controversy over Noah’s age is only the part of a far wider issue because After The Flood ages began to decline according to Peter John-Charles.

Ever since Moses compiled the book of Genesis nearly 3,500 years ago, there has been a chronological record dating back to the creation of Adam.

However, despite this various scholars have come forward with a diversity of dates for the Exodus, the period of the Judges, the reigns of the kings of Judah and Israel, as well as differing dates for the nativity and crucifixion of our Lord.

This studies reconciles this past difficulties.

Errol Hawkins picks up on this decline in ages and suggests The Flood marks the transition from an ancient Lunar Calendar to a Solar Calendar.

However, the credibility of this suggestion depends upon a personal assessment of whether it’s realistic to suggest Joseph died when he was 110 solar years old.

Another possibility is that The Flood marks the transition from an ancient Saturnian Calendar to a Solar Calendar.

There is no obvious relationship between Axial Tilt and Heliocentric Inclinations.

But when the data is sorted by Axial Tilt the terrestrial planets conspicuously fall into two sequenced groups – where only [the Velikovskian] Venus is very modestly out of kilter.
…
The clear implication is that [both] Jupiter and Saturn are ejecting Moons [and Cometary Blobs] into the inner Solar System where they finally settle to become terrestrial planets.

Central to a reconstruction of ancient planetary history is the acknowledgement of the primacy of the planet Saturn. This has come about through comparative mythology studies, and in modern times has been promulgated by Dave Talbott in his book, The Saturn Myth, published in 1980. This important detective work and its later iterations by other scholars have furthered an understanding of a planetary arrangement completely different than today.

There are now extensive writings and a number of videos that flesh out this evidence. The most significant one to date is Talbott’s Symbols of an Alien Sky. It is a heartwarming and eye opening view of a missing chapter in Earth history. See it here:

Jno Cook, another Saturnian has Mercury in place of Venus, with Venus off to the side of Saturn connected by a curved plasma stream. This was the rib that Adam (Saturn) broke from his body to create Eve (Venus). Most Saturnians recognize that the super hot, electrified Venus was born out of Saturn through some unexplained eruption, and that sometime in its early existence Venus acted like a renegade comet. Immanuel Velikovsky thought that Venus emerged from Jupiter, but this appears to be in error according to most.
….
For more detail on this subject, read Jno Cook’s chapter 6 in his web based book, Recovering the Lost World:

Reviewing the orbital periods of the outer rounded moons of Saturn suggest that a Saturnian Calendar could have contained somewhere between 15.945 days [Titan] and 79.322 days [Iapetus].

Therefore, Errol Hawkins’ suggestion that an ancient Before The Flood calendar year contained about 29.5 days is compatible with the concept of a Saturnian Calendar.

This still leaves the issue of Joseph being 110 solar years old when he died.

However, if Joseph reached the previously established average age of 73.75 solar years then this implies that when Joseph died the length of a solar year was only 244.88 days long.

If the Earth was orbiting the Sun every 244.88 days then it’s orbital path would have been [theoretically] much closer to Venus [which orbits the Sun every 224.701 days].

However, if the original Saturnian Calendar was a few days shorter [say about 27 days] then Earth and Venus would have experienced Velikovskian close encounters.

Intriguingly, if Earth was originally an outer moon of Saturn [like Titan or Iapetus] then it’s likely that the Earth was tidally locked with the dark side of Earth experiencing a constant Ice Age.

Titan orbits Saturn once every 15 days and 22 hours.

Like the Moon and many of the satellites of the giant planets, its rotational period is identical to its orbital period; Titan is thus tidally locked in synchronous rotation with Saturn, and permanently shows one face to the planet.

The above is highly speculative but it does provide a mechanism that connects the narratives [for the Earth] presented by Immanuel Velikovsky and the Saturnian storytellers.

FOOTNOTE
If you are interested in the Saturnian Story then it’s worth noting that David Talbott and Jno Cook will be speaking at the Planet Amnesia – Toronto Conference in May this year.

DAVID TALBOTT – Rituals of Remembering and Forgetting
It seems that an urgent and obsessive response to celestial dramas shaped every ancient culture. But from one land to another we observe a confusion between terrestrial and celestial referents, between the man-made symbols and the original celestial forms—the archetypes—to which the symbols direct our attention.

Every well-documented culture remembered the cosmic mountain of the gods. Each remembered the creator-king who stood upon that very hill. And each remembered the “place par excellence”—the divine temple, city, or kingdom fashioned upon that same mountain and serving as a model for thousands of symbolic replicas fashioned on earth.
…
JNO COOK – The End of Catastrophism
From his opus, “Recovering the Lost World,” in three volumes, Jno Cook will present his findings on celestial events that concluded the age of catastrophism in the first millennium BC. These events involved Mercury and Jupiter in what became the myth of Phaeton, commemorating the lightning bolt of Zeus. Drawing from various sources, the Chilam Balam, Australian lore, the Tzolkin calendar, and others, Cook has assembled evidence that the equinoxes and solstices moved 15 days forward in the calendar and that the rotational axis of the Earth moved from Ursa Major to Ursa Minor.

4 Responses to Noah and The Flood